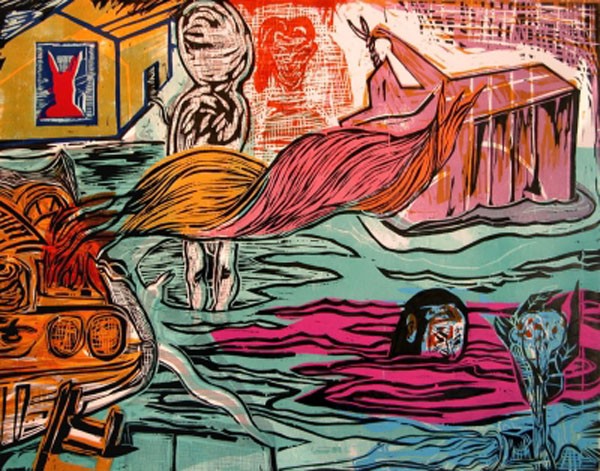 In a small gallery just off the lobby of the Orlando Museum of Art, there’s an engaging – albeit small – exhibit of wood cuts, engravings, bright folk-art acrylics and letterpress books that’s worth its weight in, well, ink. Ke Francis, Recent Small Works is part of a new program at the OMA that’s offering bi- monthly exhibitions of new works by contemporary artists from Florida. Francis is a sculpture and printmaking professor at the University of Central Florida, and he publishes his books – which contain simply written but imaginative tales that are set by letterpress and illustrated with wood cut and other prints – with Hoopsnake Press, a limited edition fine-art press located in Oviedo and founded by Francis in 1996 as a collaborative effort with UCF’s fine-art press, Flying Horse Editions. The works on display as part of this show are, like Francis’ stories, childlike (but not childish) and primal – deceptively simple and pleasing upon first glance but complex and detailed and even slightly disturbing should you take a closer look. Sharks fill the waters beneath a raft of men who’ve escaped a shipwreck in “Soul Shark,” a gorgeous nine-color woodcut that accompanies the letterpress book of the same name; a wood cut image of a bait shrimp stuck through with a hook features an almost anthropomorphic shellfish about to become a lure for bigger fish – perhaps one of the other fish illustrated in Francis’ portfolio of prints inspired by the pastime of fishing. This little exhibit doesn’t disappoint, and you don’t even have to pay the museum’s $8 entrance fee to view it, so if you’ve got an hour or two to spare and find yourself in the vicinity of the OMA between now and Feb. 13 (when the exhibit closes), it’s worth it to make a quick stop to look at the works and thumb through the books – after you don the cotton gloves provided by the museum, so your grubby mitts don’t damage the delicate, limited-edition tomes.

File this one away under Things We’d Love to Attend But Are Too Broke to Even Contemplate: The Blue Flower Winter Writers’ Conference is taking place Jan. 9-15 at the Atlantic Center for the Arts in New Smyrna Beach. The five-day conference gives aspiring writers a chance to workshop with their peers and a faculty of accomplished writers. This year’s faculty includes Nick Flynn (author of Another Bullshit Night in Suck City) leading workshops on memoir writing, Mark Doty (an NEA, Rockefeller and Guggenheim fellow with lots of prizes, awards and books of poetry to his name) discussing poetry and essayist/novelist Mary Gaitskill (Two Girls, Fat and Thin, Bad Behavior) leading a workshop on short-story writing. Tuition for the five-day affair is $1,150 if you’ve got a place to stay or $1,450 if you plan to stay on site at the Atlantic Center. If you can’t come up with that kind of cash to attend the conference, the Atlantic Center will host free readings all week that’ll be open to the public. For the schedule, visit www.bfawwc.com.

Urban Think! the Thornton Park bookstore that closed its doors in March 2010 then sent out surveys over the summer asking people to help come up with a new name and concept for the space, is gearing up to re-open (albeit in a different format) in early 2011. Details on what’s in the works are slim at the moment. We contacted Urban Rethink (which is what Urban Think Foundation, the nonprofit organization behind Urban Think! has been calling the space for months now) for more information, but were told the business isn’t ready to reveal much yet, except to say that the new venue will be home to a café and regular programming and that it plans to open in the first quarter of the year. Despite the fact that the store hasn’t been operating for nearly a year, the space has continued to hold events. In December, Voci Dance and puppetress Tamara Markes Lares used the venue to stage Macabre Vignettes 3, an art installation/modern dance performance. And on Jan. 7, Urban Rethink will host two events: A release party for Drupal 7 by the Florida Drupal Group (if you’re a CMS geek, you’re probably already in the know, but if you’re not, Drupal is a free, open-source content-management system that’s releasing its newest iteration) at 6:30 p.m. and a Bad Film Appreciation Society movie at 8 p.m. The Drupal party is free, but there’s a $6 cover charge if you stick around for the film. More news on Urban Rethink’s resurrection when we get some. Urban Rethink is located at 635 E. Central Blvd.