A sure sign of a city's culinary vitality is the rise in restaurants specializing in regional variants of a cuisine. In the case of fare from the Indian subcontinent, there are two local restaurants (that I know of) showcasing the gastronomy of Gujarat, a predominantly vegetarian province in the westernmost reaches of India. Khasiyat on West Lancaster Road is one, and Daana Pani, situated inside the Laxmi Plaza on South OBT, is the other. The latter moved in when South Indian veg restaurant Bombay Café vacated the space and reopened down the street as Bombay Street Kitchen. Daana Pani (translation: "Seeds Water") doesn't mince words in its name, nor does it mince anything on its menu — yes, this is a vegetarian restaurant.

It's a weighty bill of fare, half of it packed with commonplace offerings you'd see at any Desi restaurant, but Daana Pani's Gujarati specialties (highlighted in green on the menu) drew our focus. Items like the khaman dhokla ($6), a steamed spongy and savory cake made from gram flour, cilantro and mustard seeds. They're a favorite snack of mine, but not the ones served here. The batter for these cakes needs time to ferment — it's what gives dhokla their characteristic bite. These had none, and dressing them with slivers of jalapeño (as opposed to fried green chilies) was a fail on both flavor and aesthetic fronts. Tamarind and green chutneys have their place in Indian cookery, but dhoklas need their own, like a thick, red-hot dipping chutney.

OK, now that the unpleasantries have been addressed, let's get to the good stuff — because there's plenty of it. The pattice kachori ($6), deep-fried potato balls spiced and stuffed with coconut and nuts, are a great start. So is the pani puri and its infernal "water," and the plate of six assorted samosas. Apart from the triangular pastries stuffed with the usual spiced potatoes and peas, there are paunchy numbers enveloping Italian (spinach, artichoke, three-cheese blend) and Mexican (black beans, corn, cilantro) flavors. If you're like me and enjoy the "head tingles," the battered-and-fried whole green chilies will have you scratching at your scalp and wiping away sweat.

Snacks aside, there are substantial dishes at Daana Pani that lend plenty of Guju comfort. Undhiyu ($12), for one, is a thick dry curry teeming with green bananas, eggplant, squash, potatoes, peanuts and chickpeas. It's served with puri — the puffed fried bread that's fattened the coffers of cardiologists in India for decades. Shred the bread and scoop up some curry, and don't forget to ask for a side of raw onions and chilies — it's all a part of the comfort. Then there's khichdi ($6) and bateta ($11), arguably Guju cuisine's most comforting dish. Khichdi is rice and lentils cooked down to a risotto-like texture; bateta is a simple preparation of potatoes cooked with tomatoes, spices, curry leaves and mustard seeds. Together, they're absolute bliss. Again, enjoying the dish with a side of onions and chilies is integral to the experience. 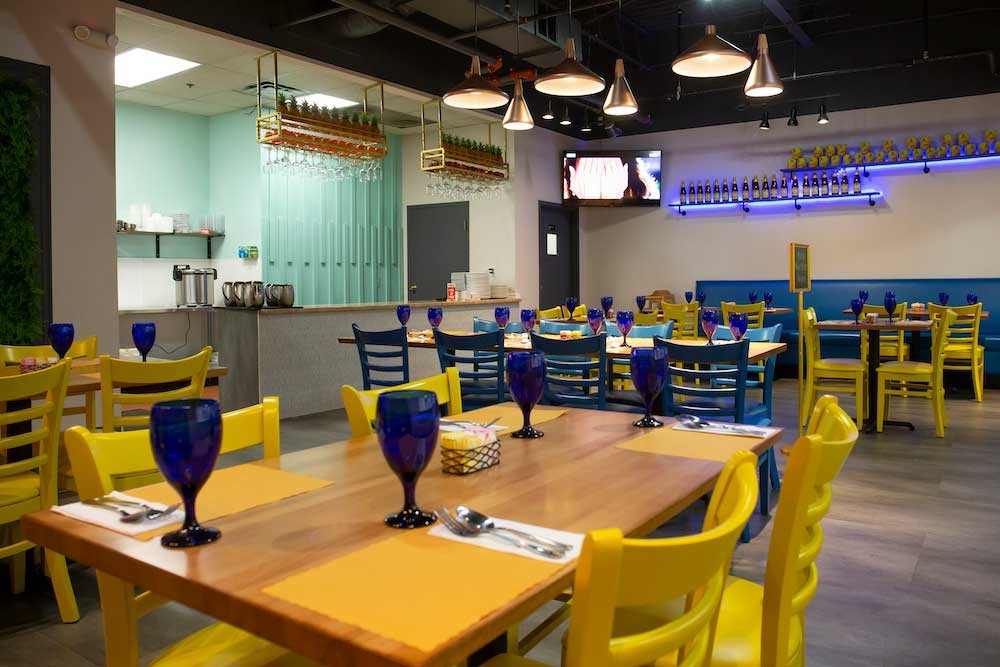 Papdi no lot ($8), a heftier option, is made by steaming a batter of rice flour, chilies, cumin and carom seeds into a mound. It's sprinkled with sesame seeds, then dressed with a little oil and pickle masala, both served on the side. But it's the carom seeds, or ajwain, that really impart the distinctive earthy, aromatic thyme-like essence to the dish. A crisp papadum version of it is served with the pav bhaji thali ($16), a large plate comprising smaller dishes of four curries — black, green, red and Amul, a Gujarati processed cheese. The curries are enjoyed with soft buttered rolls, but there's more to the platter: white rice, khada pulao (a spiced pilaf), samosa, green chutney, raw onions and a ball of gulab jamun for dessert.

The thali is great for sharing, but if one gulab jamun ball isn't enough, the restaurant's sweets shop across the hallway has a dazzling array of mithai on display. In fact, the confectionery plus bistro is what Daana Pani is made of: sugar and spice and everything nice.