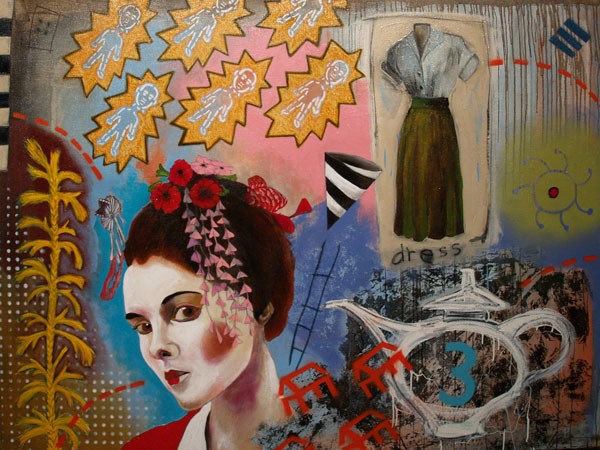 Robert Reedy’s rich visual jambalaya of symbols, pop icons and cultural narrative makes his Doodah Dada exhibit at the Maitland Art Center a welcome, joyous celebration of the creative act, sure to lift the spirits of even the most pessimistic among us. Reedy, a professor of art at the University of Central Florida, was awarded a private studio at the Maitland Art Center earlier this year after being chosen for the yearlong Artists-in-Action program. In his solo show, he colorfully explores everything from ceramic to collage to painting. We see not only what Reedy can do, but what an artist with drive can do with a studio at his disposal: From guitars to teapots to paintings to found-object collages, the stream of consciousness connecting all of these objects is like comfort food for the soul.

Dadaism, the early 20th-century movement that celebrated the absurdity of modern life, is mixed with Reedy’s Mississippi roots. In “Geisha,” for instance, the subject’s classical, snow-white face and bee-stung lips are embedded into patterns of stenciled male figures and red house forms, along with miniature machines, a wheat stalk and a 1950s-era skirt and blouse. Whether it’s an epic dream, a graffiti-inspired mural or simple, passionate art-making, “Geisha,” like Reedy’s other paintings large and small, has a playful, splashy cadence that keeps the paintings on the light side despite the sexuality lurking within.

At a smaller scale, Reedy’s tiny collages focus on a densely packed world. “Yella Crow” has more gently contrasting colors than his larger work, and it appears fragile and temporary, ready to fall apart except for the lone pushpin. The collages are made with floor scraps and bits of the detritus of life including Hershey’s Kisses plumes and real wishbones, and Reedy’s repetitive elements of spirals, numerals and warbirds.

The artist is humorously bowled over by his own face in “Self Portrait”; a bowl appears over his head and is surrounded by his favorite symbolism and bookended between a tornado and a pair of red peppers. Reedy’s disarming sense of humor makes the work accessible and lets you know that his themes, as heavy as William Faulkner novels, are not to be taken too seriously.

Reedy’s teapots, however, reveal a completely different side of the artist. Some are purely ceramic; others, like “DADA Teapot #1 and #2,” mix found objects with ceramics to produce singular artworks loosely based on the idea of a vessel with a spout. The “#2” teapot looks like it sprang from his paintings, anchored by a velvety, black ceramic cylinder perched over a car part and flanked by a black-and-white spiraled handle on one side, and a whimsically wired-up spout on the other. The aesthetic sophistication makes these pieces hover somewhere between inventions and works of art, each one unique and sculpturally terrific.

Reedy’s disarming approach to art belies his academic stature and his participation in local foundations and endowments, including successful endeavors such as collaborating with UCF’s fine arts press Flying Horse Editions. In his video at the exhibit, Reedy disclaims the cerebral, preferring instead to talk about the personal and idiosyncratic nature of art. Here, creativity from the heart informed by the mind, can put a smile back on the viewer’s face in the sanctuary of the main gallery, giving one hope that art can be restorative to the soul.