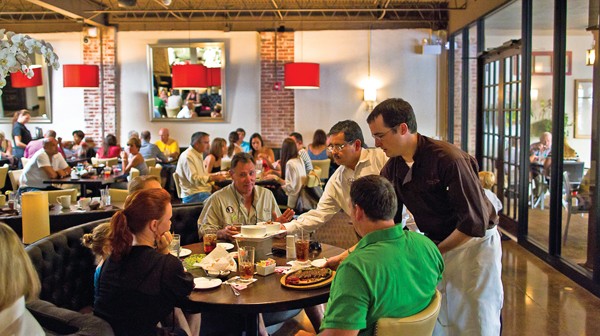 Following in the highfalutin footsteps of Cantina Laredo and their brand of uppity Texican cuisine is Cocina 214, quite possibly the finest restaurant of the genre in these here parts, and the only one with cojones big enough to lay claim to the title “Most Interesting Place in the World.”

Those words – written on a blackboard in the heart of this sprawling industrial-chic space – are a play on Dos Equis’ “Most Interesting Man in the World” promotion, and while there’s some hyperbole in that declaration, the food concocted at this Winter Park cocina is undoubtedly interesting. So while the distinguished don of Dos Equis can boast of his ability to “speak French, in Russian,” chef Francisco “Chico” Mendonça, a distinguished and accomplished chap in his own right, can boast of skillfully rendering Mexican flavors with Portuguese flourishes. The result, a sort-of contemporary-haute-Mexican-fusion, had us nodding in approval.

The requisite salsa with chips arrived first. While we enjoyed the fiery-red and properly piquant dip, we needed the heat turned up a bit. The bombero salsa (made with árbol peppers) failed to ignite, but the special habanero salsa blended with lime and cilantro had the burn we sought, compliments of Chico.

Spice was part and parcel of the camarão com piri-piri ($12), a dish influenced by Chico’s Portuguese heritage. Sweet, perfectly battered rock shrimp were served with a buttery, blood-red sauce infused with the scorching bird’s-eye chili (“piri-piri” in Portuguese). As we popped the little buggers, we caught the eye of a lady standing guard in the main dining room, almost hovering over us. Turned out she was the owner’s ever- vigilant and friendly mother, recruited to help tend to diners, though her proximity to our table was a bit distracting. Thankfully, our starters proved even more distracting, including the chunky guac ($9), a must for those who can’t begin a foray into Tex-Mex without first downing a bowl of the avocado mash.

Tradition is the focus in the pollo pibil ($19), a Yucatan classic of organic chicken marinated in an achiote-orange-garlic mix then baked inside a banana leaf for a couple of hours. The result is a brightly hued, sublimely moist half-bird with a mild, almost unexpectedly subtle flavor. Only the mound of grainy rice dulled this colorful dish. Simple, expertly seasoned carne picante ($18) – a typical workingman’s meal – gets the rich man’s treatment with tender cubes of diced filet mignon cooked with peppers, cumin, plenty of garlic and a splash of Negra Modelo.

Mexican doughnuts ($5) were to be the coup de grâce, but these were more like Portuguese-style malassadas – donut holes with a lemony smack – instead. The flan ($5) wasn’t as smooth as I’d like, but that proved a small misstep in an otherwise enjoyable evening.

Clearly, getting a chef experienced in Texan Tex-Mex cookery was of the utmost importance to the Macejewskis, a couple of native Texans themselves. The “214,” in fact, is a reference to the Dallas area code, so it’s no surprise that my meal here evoked Tex-Mex dinners enjoyed in Fort Worth, Texas.