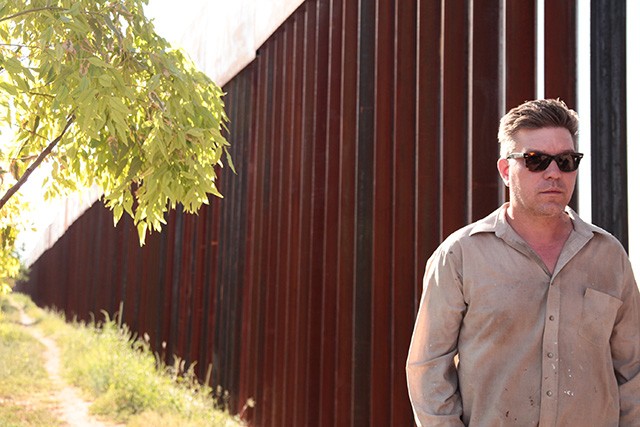 For years, nomadic singer-songwriter David Dondero flirted with the idea of giving up his hardscrabble musical life. On 2010 album #Zero with a Bullet, he sings, "I need to get away/ I don't trust a goddamned thing that I say/ I really need to get away from me." The title track of his new album, This Guitar, puts it most bluntly, however: "This guitar fucking ruined my life/ Lost me jobs and lost me wives/ I swear I'm gonna strangle its skinny neck/ For turning my sweet life into a wreck."

"I've been saying for years that I'm going to get out of this racket," Dondero says. "It's a losing game. But I haven't stopped yet. I still have new songs." The tunes on the self-released, Kickstarter-funded This Guitar brim with devastating details, impassioned opinions and odes to life's broken-hearted peculiarity. "Samantha's Got a Bag of Coal" relates the story of an Indiana-born, Bay Area-transplanted transvestite who was nearly killed in a hate crime before eventually committing suicide; "There's No Tomorrow in This Song" finds Dondero mulling mortality in Alaska while serving drinks to a three-man crew that ends up perishing on Mount McKinley.

Of This Guitar's 11 tracks, Dondero says, "They're pretty much just a continuation of what I do. Nothing new." But barroom piano, Tejano-laced horn arrangements and accordion swatches provided by Austin, Tex., musicians Eddy Hobizal and Kullen Fuchs (during recording sessions there) add jaunty flair to the album's otherwise bare-bones palate. Don't expect anything more than one weary man and his beat-up Gibson Hummingbird when Dondero swings through, however. "It'll just be me alone playing folk-style," he says. "I can't afford to tour with a band. I'd love to someday. And the guys who play on my records deserve to be paid properly – they have children and families back home to support."

Does Dondero regret giving up creature comforts in favor of a long, strange life spent cycling between odd jobs, break-even touring and a long run of critically acclaimed but commercially unsuccessful albums? That depends. On the brutally honest "Alcohol," he sings, "Your dear old mama/ Told you I was trouble/ Told you I'd always be poor/ And that you'd best get out on the double." Later in the song, which Dondero describes as "completely accurate," his significant other splits in favor of stability, family and money, to which he responds, "You wonder why people drink/ Yep!"

Dondero's tears won't be falling into his beer between sets at Will's Pub, though. For the last few months, he banged nails on an isolated farm in Mendocino County, Calif., racking up, as of Nov. 2, 42 days of sobriety in the process. "I'm a little nervous about being on the road because I didn't have a lot of interaction with people while working on the farm," he says. "It will be interesting to see if I can make it through this tour without getting all sauced up. I'm not saying I won't drink again, but I'm going to try."

Like any good wanderer, Dondero doesn't look much further into the future than that. When pressed about his current living situation, he briefly rants about the unaffordability of past haunts like San Francisco and Austin before mulling a move to the Southeast: "Jacksonville, Savannah, maybe Myrtle Beach? Someplace I can actually afford." As for that musical retirement his work has hinted at in the past? "Who knows?" Dondero finishes. "I'm writing new songs, but maybe this tour is the final nail in my coffin. Life is fleeting. I could be dead tomorrow. You gotta go while you still can."