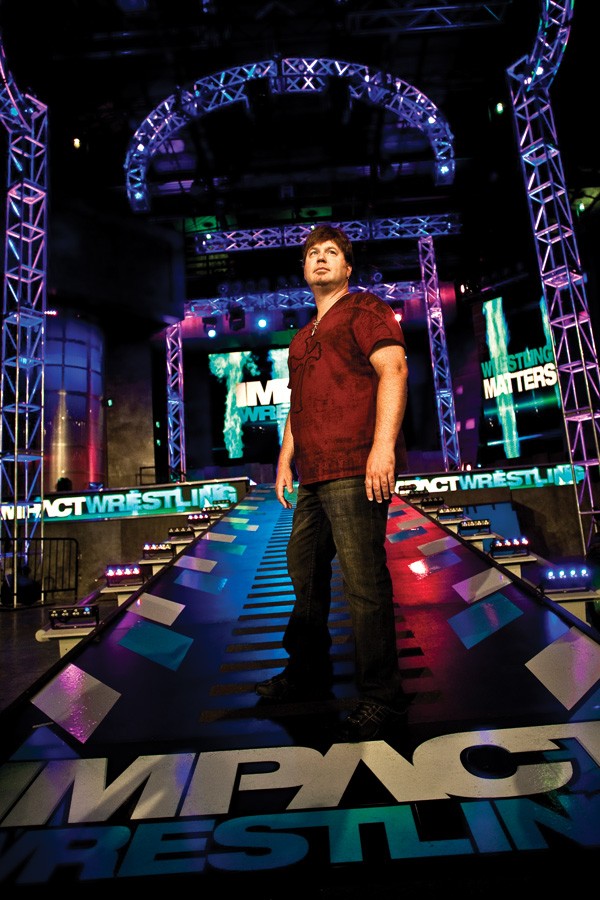 Professional wrestling is not simply about professional wrestlers doing what they do best. It hasn’t been for a long time – not since Vince McMahon launched a global phenomenon with the inaugural WWF WrestleMania in 1985 by glossing up a ho-hum-looking, niche pseudo-sport with big-time production values and over-the-top characters. One of the most important elements that McMahon relied on that hadn’t been commonly used before was customized entrance music, a way of establishing or accentuating a character’s personality through non-visual means. Music has since become essential to any wrestling organization worth its turnbuckles. Under the right circumstances, hearing just a note or two of a wrestler’s theme is enough to send a crowd into a Pavlovian frenzy. Witnessing and/or participating in that kind of base response is part of what makes wrestling such a thrilling spectacle in the first place.

As music composer and director of audio production for Total Nonstop Action Wrestling (which appears to be in the process of being rebranded Impact Wrestling, the name of the company’s weekly Universal Studios-filmed program on Spike TV), Dale Oliver’s job is to generate those responses as often as possible – to make something immediately recognizable. While full versions of Oliver’s compositions run a couple of minutes or longer, he’s given only a few seconds to capture a crowd’s attention with a musical motif that speaks to an individual character. Considering TNA’s roster is a varied lot, each wrestler is ideally associated with his or her own idiosyncratic sound.

Abyss, a mentally disturbed brawler with a Hannibal Lecter-esque mask and scars up and down his arms, comes out to scowling hard rock. Olympic gold medalist Kurt Angle’s music is anchored in pumped-up percussion and features a rap espousing his prowess at systematically beating the crap out of you. Immortal, the arrogant heel (read: bad guy) faction currently dominating TNA’s storylines, enters to a psychedelic classic-rock guitar riff that’s been manipulated and drawn out, while the Beautiful People, an on-again, off-again group of bitchy, image-obsessed females, have a theme that repeats a whiny yet catchy hook made by what sounds like a guitar. Sting, the Crow-face-paint-sporting hero you’d remember if you watched the now defunct World Championship Wrestling back in the ’90s, is accompanied by a guitar solo that sounds like it could have appeared on a Metallica record.

There are literally dozens of examples of Oliver’s work, as the TNA roster is in perpetual fluctuation. Wrestlers come in and leave at any time, or specific characters undergo tweaks. Once in a while, a wrestler makes his entrance with a song that he or she is associated with from another network if the company has permission to reuse the theme, or another composer provides music for the wrestler. But more often than not, Oliver is tasked with originals.

“You’re trying to grab a piece of music that sounds right,” Oliver says in his amiable Southern drawl. The process of getting to that right sound isn’t easy. The guitar is the multi-instrumentalist’s primary tool, but he handles other aspects, including background vocals when needed and drum machines here or a keyboard line there. Since he doesn’t spend too much time relying on outside talent – unless he needs female vocals or drums or another male voice – he’s frequently teaching himself new tricks. When the occasion has called for it, Oliver has even rapped for theme songs – a pretty bizarre notion considering that his voice doesn’t have the requisite cadence. It’s tough to encapsulate the variety of the tasks that Oliver performs without pointing to a TNA program or YouTube. He’s essentially a one-man band – an impressive enough feat that seems even wackier when you consider just how much diversity goes into mapping out the roster’s entrance music.

Oliver grew up in Kentucky watching regional wrestling with more obscure talent like Tojo Yamamoto and Sweet Daddy Watts, but the wrestling biz was never intended as a destination in his career path. Getting into music as a child via the Beatles, he later studied the medium at a handful of institutions and played professionally in pop, rock and country bands. (BlackHawk, his most notable act, toured with Reba McEntire.) After ending up in Nashville and having kids, he decided that he wanted to quit touring and produce music for a living. Then, around early 2002, a friend of Oliver’s gave him a heads-up on an opportunity available at TNA (then NWA-TNA), a new wrestling organization masterminded by wrestling vet Jeff Jarrett. Oliver wrote four songs for Jarrett’s burgeoning wrestling federation to use as themes, and once Jarrett approved them, the two struck up a working relationship that continues today. Now Oliver is responsible for the lion’s share of entrance themes plus pieces of production music used on Impact Wrestling and pay-per-view specials.

As unorthodox as it is, his job at TNA offers him a lot of room for diversity. “You [can] spend a lot of your life being in a rock band or a heavy metal band, and I did all that. I was in several things that have been very successful,” Oliver says. “I have always had an affinity for different styles of music, from Merle Haggard to Mötley Crüe to Judas Priest to new stuff like Hail the Villain. Anything that is on the radio and new, I still [listen to] that. I still listen to all genres of music.” Moreover, he also writes “a lot of music throughout the industry that nobody ever really talks about.” This means writing songs for Warner Bros., contributing tracks to EA Sports’ Madden NFL 12 or playing guitar on records by Daughtry, Shinedown and Halestorm.

His role in TNA puts him in a particularly rare group of musicians: Jim Johnston has performed a similar role for WWE for years, and other wrestling companies have had one-man creators. Oliver frequently goes back and forth with TNA’s creative department to figure out how exactly to portray characters. While he speaks highly of his working relationships with the roster, the wrestlers themselves have limited input on Oliver’s work.

“A lot of times, what we may like or what [wrestlers] may like has nothing to do with what they’re going to be written to, and nobody knows that more than the people writing the show,” Oliver says. “The biggest thing is you don’t want somebody to go out there and not know what they’re coming out to. My job is to try to really identify the character. If they can’t identify with [the] music somehow, some way, then they’re not going to be able to do a good job.”