The future is now 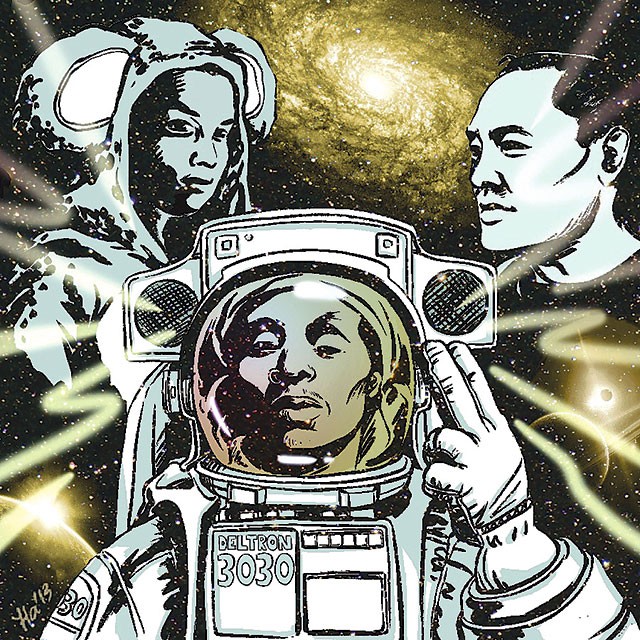 Hip-hop’s sci-fi streak runs surprisingly deep. From Afrika Bambaataa’s space explorations in the 1980s to Kool Keith’s time-traveling Dr. Octagon alter ego and RZA’s comic book-influenced Bobby Digital persona in the ’90s to MF Doom and N.E.R.D.’s deep cuts in the ’00s, rappers and producers have savored the opportunity to zone out and get metaphorically high.

No one has taken the sci-fi concept to loftier levels than Deltron 3030, a supergroup comprised of MC Del the Funky Homosapien, mix master Dan “the Automator” Nakamura and turntablist Kid Koala. The trio’s self-titled debut album dropped in 2000, when the tech bubble was most bloated. But rather than focus strictly on the present, songs like “Virus,” “Time Keeps On Slipping” and “The News” were set 1,000 years in the future, when corporations dominated public life and an “interplanetary computer prodigy” and rap battler named Deltron Zero was fighting the New World Order with sociopolitical satire and cyber-scorched rhymes.

It took 13 long years, but Deltron 3030 released a follow-up, Event 2, in 2013. Now the band will tour as a four-piece rock outfit, adding the Mars Volta bassist Juan Alderete, to follow up on last fall’s 16-piece orchestra tour. With both albums as parts of a single apocalyptic piece, though, Del (real name: Teren Jones) and Nakamura say that the tour will blend old and new material. “The way we strung both together, it all makes sense and you don’t really trip on songs coming from one album or another,” Del says. “Plus, when I wrote Event 2, I said, ‘Let me pump the brakes and not go too far from the original formula.’”

Another similarity between Deltron 3030 and Event 2? Each album’s futuristic nature reflects the present, while their technological focus probes the human condition.

“Really, the Deltron records are about the nature of man,” Nakamura says. “The first one was more fun, but the songs that stuck with people had a message to them, whether that was about technology, love or life. The same thing’s been going on since the Middle Ages – man trying to see what the future might hold. With science fiction, you have the liberty to not stick to exact facts and instead illustrate a point based on how you feel the future’s going to be.”

“We work together and feed off of each other, but Del’s vocabulary is far superior to mine,” Nakamura laughs. “In a different time, he would have been a crazy writer or poet. He has this magical quality for lyrical wordplay. I make music that sticks with people and then 10 years later they figure it out, just like Del writes lyrics that 10 years later I finally figure out.” But Del emphasizes that his Deltron Zero character doesn’t represent a big stretch for him. “Although Deltron Zero is presented as a character, I’m giving you what I really feel about the situation, whether it’s now or 1,000 years from now. I’m not a different person than I am on my record. Rap is so reality-based that it helps if you are a little bit of the person that you bragging about. And some people out there are not one iota that person. They completely fake – just spitting hot air.”

Del and Nakamura both had plenty more to say about the current state of hip-hop and their perpetual roles as “alt-rap” outsiders. “To me, hip-hop is so insular,” Del says. “It’s like a secret society: You either in or you out, and there are certain ways you supposed to sound. As far as [Deltron’s] music is concerned, we definitely outsiders.”

Riffing on the pluses and minuses of Jay-Z, Master P and Cash Money Records, Nakamura adds, “With hip-hop, you have the bright spots and the status quo. I don’t need to keep hearing about your money or your bitches. It’s the same with all music in general. The kids will always have their One Directions. So in terms of manufacturing characters and personae, even though we’re 1,000 years in the future [with Deltron], we’re more realistic than Lady Gaga or Katy Perry. We’re at least talking about stuff that’s real.”