In primary dismount, everybody tries to look like friends; most succeed 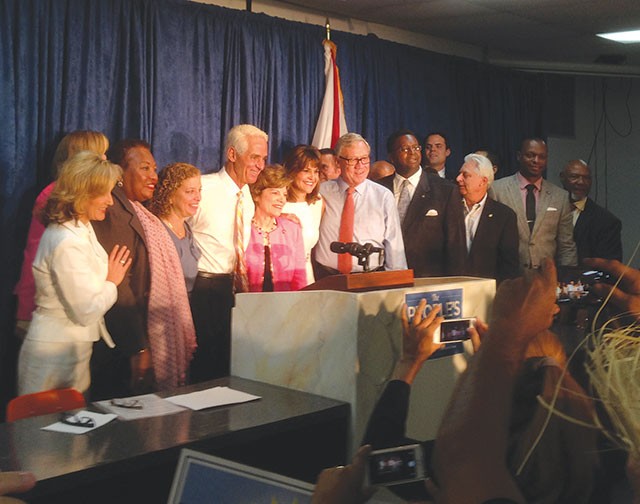 “Last night, I called Governor Crist to offer him my congratulations. He will now bear the Democratic standard in a contest where nothing less than the future of Florida is at stake. It will be a very tough fight to beat Rick Scott. Charlie Crist will need all of our support to win. He has mine. I am very grateful to all the loyal and dedicated volunteers who worked so hard and for so long on our campaign these past many months. Your support meant so much me. I hope you know, as I do, that the election results were not a rejection of our ideas or ideals.”

Number of people who cast votes in the Orange County Aug. 26 primary for Nan Rich

Do you remember that time when Michael and Tito and Jermaine (and the rest of the Jacksons?) laid down their arms to make one last familial jab at the “Torture” of a Victory Tour – shut up, we know about 2300 Jackson Street, and we’re trying to forget it – and everybody sort of cared, but also nobody really cared because not everybody (cough, Michael) showed up for the filming of the “Torture” video? That’s how we felt on the morning of Aug. 28 as Democrats, fresh from a sort of obtuse primary, came together at a union hall off of South Orange Blossom Trail to gather in a circle and square dance to the notion that in just over two months, all of the acrimony and bitterness of primary season would be shed in order to render the state of Florida “[Rick] Scott-free” and “[Pam] Bondied-out.” It was, in short, awesome.

But outside, there was a coup of sorts. While we were driving down OBT, barely noticing the strip joints and predatory lenders and bad streetscaping, the wonder that is Republican revivalist – meaning he’s hoping to return to the state House of Representatives after a bit of an unelected respite – Scott Plakon honked at us. The NERVE! Anyway, it turns out that Plakon, Rep. Ritch Workman, R-Melbourne, and Sen. Kellie Stargel, R-Lakeland, all showed up for something of a picket situation. A mob of about 10 people held signs saying “failed governor” and such. We, like other reporters, had to get a quote. The three of them settled on something about how Crist would still be a Republican hating on Obamacare if he had beat Rubio, so there. Hooray.

“But your guy is sort of a fraud, right? It can’t be easy over there in the red,” was our response. All the clams chattered about the politician versus the businessman and we were done swiftly. They used to all make out with Crist, after all.

Oh, and astronaut U.S. Senator Bill Nelson, D-Florida, had some things to tell a gathered throng about NASA and Orion and funding, but we lost interest real fast, or just spaced out.

Inside, things got a little interesting when self-professed “neutral” guy on the gubernatorial race (meaning he hates Charlie) Mayor Buddy Dyer introduced the whole affair by screaming about Democrats and how awesome they are. The Rev. Randolph Bracy, he of the deepest voice, brought Jesus into the affair, and we were off. State Sen. Geraldine Thompson came on, followed by statewide Democratic Chairwoman Allison Tant, followed by national Democratic National Committee Chairwoman Debbie Wasserman Schultz (hates the medical weed, y’know), and we all got the civics lesson about voter purges and Medicaid expansion and everything you already know. Sen. Nelson came out and made a joke about “D” and “R” (as in “drive” and “reverse”) to a slight bit of mumbled acclaim, before he “enthusiastically” endorsed Crist and his running mate, Annette Taddeo. Then the hard part started.

You see, sometimes these events – OK, maybe just this event – feel like that weird part at a high-school reunion where former enemies are forced to eat crow and allow that we’re all better off if we just get along and move forward together, like boxers or soldiers or Matchbox cars. So first up was former Attorney General candidate and current House Minority Leader Perry Thurston, who recently filed a complaint against his opponent, George Sheldon, over district residency after a similar complaint had been filed against him. Dirty politics are cute! But all’s well that ends well and Sheldon commended Thurston (and vice versa) before offering the ultimate bon mots that “I believe the attorney general is the people’s lawyer” and that “We need marriage equality in this state and we will have it.” Meanwhile, quipped Sheldon, Bondi can pursue her desired career as an “anchor on FOX News.”

Lieutenant Governor hopeful Annette Taddeo spoke in Spanish, so our notes are useless. However she did call Nan Rich “classy”… in English. How many times do you think Crist’s wife, Carole, asks about Annette just before bed? Thirteen is our guess.

Rich arrived soon after to wild applause from her progressive base and basically repeated her already produced statement on Crist’s primary win without much alteration.

Which, of course, meant that Crist was next to speak. OK, we’ve been watching Crist’s speeches since he announced last November – even before then, really, because he was already governor once – and they don’t often sway away from the lines in the middle lane. There was a joke about being “crystal clear” (“no pun intended”; every Big Sugar pun intended). But then the party line went something like this: “Rick Scott broke my heart” on every policy decision, which, fine. But it’s going to take more than a teenage crush shattered like an old single on a bedroom floor to pull this party together and shut down that party made of money, Peggy Lee. The chants of “Charlie! Charlie! Charlie!” weren’t quite as loud as they should have been; the people in the audience talking over the stump speech were perhaps a bit too loud. Things don’t look so great just yet, even if it is a “good crowd.”

One person, precariously perched on our shoulder (actually, just next to us) commented, “I’ve never seen so many Democrats fawn over one Republican” as the whole stage of somebodies gathered for the big photo op.

We really haven’t either. Can we go on together with suspicious minds? We’ll see in two months.