‘Despicable Me 2’ is wicked good

Sequel is a worthy follow-up to the superbly sill original 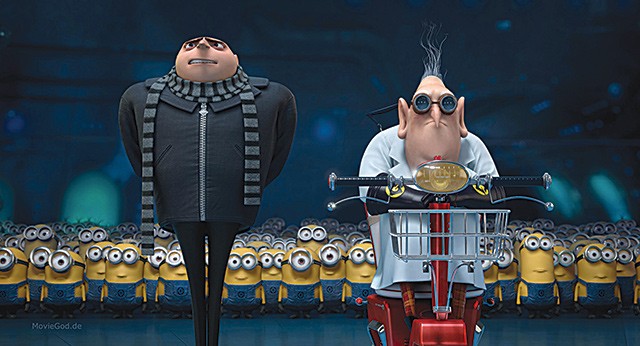 What does a super-villain who decides to retire from wreaking evil do with his time? It’s a quandary that few people (outside of Dick Cheney) ever have to face, but it forms the core of the comic crisis Gru confronts in Universal Pictures’ superbly silly CGI sequel, Despicable Me 2.

Picking up an unspecified number of months after the 2010 original, we find that bald ex-baddie Gru (absurd pseudo-Euro accent by Steve Carell; character design apparently modeled after celebrity chef Robert Irvine) has still sworn off moon-stealing and similar chicanery to raise his trio of adopted orphans. But playing birthday party princess doesn’t fulfill Gru’s deep-rooted power fantasies, his dating life is non-existent, and even his ever-loyal (and aging) henchman Dr. Nefario (Russell Brand) leaves him for a new employer who offers “more evil [and] full dental.”

Enter Agent Lucy Wilde (Kristin Wiig, returning from the first film but as a new character), a scatterbrained superspy from the Anti-Villain League. She invites Gru to go undercover with her as a cupcake baker at the local mall. They stake out a new super-villain armed with monster-making serum. Gru enthusiastically embraces his new heroic role, setting his sights on a suspicious salsa seller (Benjamin Bratt), whose son, Antonio (Moises Arias), happens to be the object of his daughter, Margot’s (Miranda Cosgrove), adolescent crush. Naturally, this all leads to a dramatic denouement featuring a damsel in distress tied to an explosives-laden shark, which is strapped to a rocket, which is launched by a vicious chicken.

Writers Ken Daurio and Cinco Paul deftly balance the family dramedy with absurdly explosive 007-style set-pieces, which directors Pierre Coffin and Chris Renaud stage with a flair for slapstick that would make both Tex Avery and Peter Sellers smile. Gru’s character arc isn’t quite as emotionally involving as in the original, and the romantic subplot’s resolution seems somewhat abrupt and under-motivated, but the wit and energy return intact.

Most importantly, the Minions – Gru’s mischievous army of gibberish-speaking yellow Oompa-Loompas – steal this film as handily as they did the first, filling every second they’re on screen with antics that will inspire soda to spray from your nose. Stick around through the credits for a preview of 2014’s Minion-centric spinoff, which looks to be the funniest non-verbal feature since the silent era. Dreamworks’ Madagascar and Shrek series may be creatively exhausted, but Universal proves with Despicable Me 2 that Pixar’s animators aren’t the only ones capable of top-quality sequels.