by A.C. Thompson, ProPublica and reporting by Lucas Waldron and Christopher Mathias

In his 74-page manifesto, Brenton Tarrant, the alleged gunman responsible for the massacres at two mosques in Christchurch, New Zealand, lays out a hyper-extreme worldview animated by racist and fascist thought. While the authorities say Tarrant posted his treatise on 8chan – a relatively obscure web forum that attracts trolls, hackers and hardcore white supremacists – the ideas in the document are also circulating on many of the world's most popular social media platforms.

Over the past four months, for instance, a YouTube user known as Third Positionist posted over 100 videos espousing extremist ideas that closely resemble what the authorities have identified as Tarrant's writings. The user's videos – full of racist, anti-Semitic and Islamophobic views – have attracted more than a half-million views.

YouTube said last week that it had terminated the Third Positionist account after being alerted to it by ProPublica and HuffPost. It said it had found no evidence that the account belonged to the accused New Zealand gunman.

Social media giants have long struggled to moderate extremist content, and most have waged periodic crackdowns. But in recent months, YouTube has emerged as something of a flourishing option for white supremacist and neo-Nazi videos.

The material posted by the user named Third Positionist – mirroring much of the hateful content subscribed to and promoted by the gunman in New Zealand – is but one example. Third Positionism is a variant of fascism that blends elements of the extreme right and left.

Tarrant's online writings praised Sir Oswald Mosley, a mid-20th-century British fascist leader who supported Adolf Hitler and fiercely opposed immigration. At least two speeches by Mosley are featured in Third Positionist videos. The symbol used as the logo for Third Positionist's YouTube channel – nine interlocking crosses – was also drawn on one of the gunman's rifles. The graphic on the front page of Tarrant's treatise also appears repeatedly in Third Positionist videos, albeit in a slightly altered form.

A recent video posted to the Third Positionist channel featured a discussion about the merits of Nazi Germany and the need to remove all Jews from "positions of power." Another, uploaded late last year, argued that the U.S. fought on the wrong side during World War II. On March 11, 2019, the channel posted an interview with Thomas Rousseau, one of the organizers of the 2017 white power rally in Charlottesville, Virginia, and leader of Patriot Front, a right-wing extremist group that uses the Nazi slogan "Blood and Soil." Rousseau said the group is focused on "reclaiming America" for white men.

White supremacist YouTube channels have been online for years, but many appear to have launched – or relaunched – in the past few months. Banned videos seem to reappear regularly, sometimes with new titles, confounding the efforts of content moderators.

"It's a war of attrition against those who keep coming back, keep coming back and posting," says Oren Segal, director of the Center on Extremism at the Anti-Defamation League. White supremacist content "is a huge challenge" for social media platforms. "They don't have the technology to assure that once you're banned you can't come back."

Much of the material on the Third Positionist channel is drawn from podcasts and livestreams originally posted by Mike "Enoch" Peinovich, a New York City-based white nationalist and anti-Semite.

Peinovich, who helms a racist media micro-empire called The Right Stuff, maintains a YouTube channel, as well. "The muslims are in the process of conquering Europe through migration and birth rates," wrote one commenter on the TRS Radio page. "Something needs to be done about this above all else." Another added: "It's time to become Vikings and wipe these people out."

A media organization calling itself Vanguard Streaming Network is typical of the recent activity on YouTube. The network has created an array of channels on YouTube over the past year, many of them featuring the same content in an apparent attempt to elude censors. The network is quite open about its beliefs: Its logo features the SS insignia used by the Nazis, and one of the hosts calls himself Goebbels.

One Vanguard video features a cross-Atlantic conversation between Richard Spencer, the American white nationalist, and Mark Collett, a longtime racial extremist in England. Some of the videos include links to Streamlabs, a streaming service that white nationalists have been using to collect donations. Streamlabs has taken some action against racist material, recently shutting down two Vanguard channels.

Carla Hill, a senior investigative researcher at the Anti-Defamation League, says she'd heard of the Vanguard Streaming Network through Augustus Sol Invictus, a Floridian far-right attorney who attended the "Unite the Right" rally in Charlottesville and defends white supremacists.

"He is collectively working with these other individuals to form these media outlets for podcasting, which is the new way for white supremacists to get their messages out," she says.

Invictus, which is his legal name, didn't respond to a request for comment. 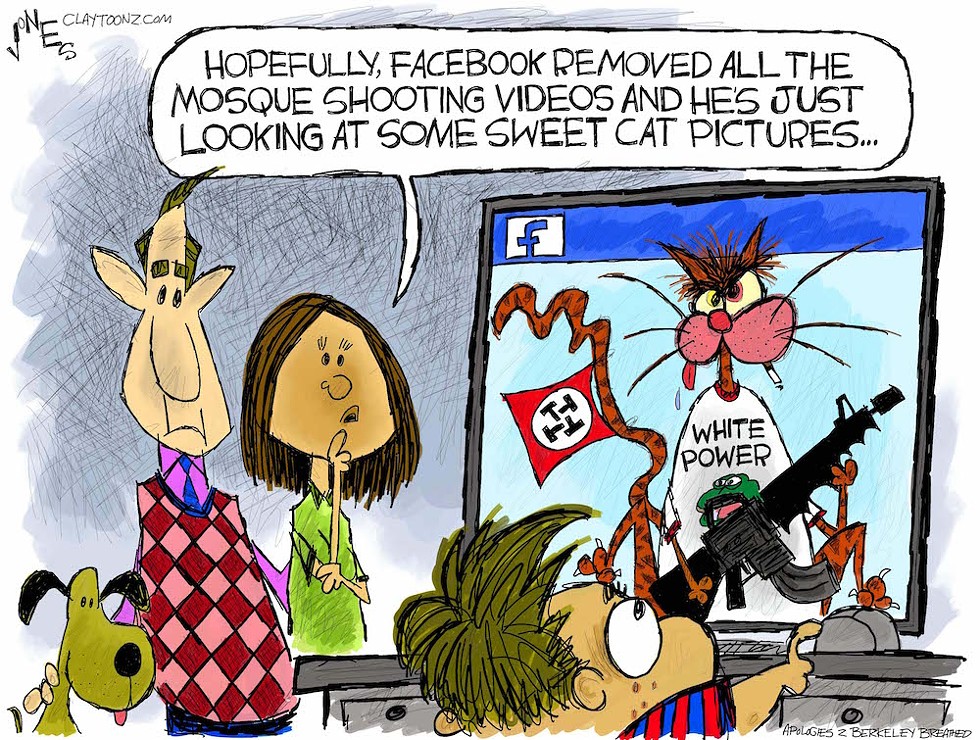 One relatively new show on the Vanguard Streaming Network is called Goy Talk, co-hosted by a masked man calling himself "Dino." Prominent white supremacist and neo-Nazi figures have appeared on the show, including Christopher Cantwell and former Ku Klux Klan leader David Duke.

As reported by the anti-racist blog Angry White Men, in November, a Goy Talk host wore a large rubber nose and pretended to be a Jewish man named "Finky Heebstein," talking in a nasal voice about the "caravan of love" moving through Mexico.

The skit was meant to promote the anti-Semitic conspiracy theory that Jews are hastening immigration to the U.S. as a way to replace white people. It's the same conspiracy theory that prosecutors say motivated Robert Bowers to massacre 11 people at a synagogue in Pittsburgh in October, only a few weeks before the episode of Goy Talk aired.

Both the Third Positionist and Vanguard Streaming channels share followers with The Red Elephants, a channel that predominantly features controversial political commentary from the channel's owner, Vincent James, and livestreams of anti-Muslim and pro-Trump rallies and protests. At times, James has been a vocal supporter of the Rise Above Movement, a white power gang.

James livestreamed an event billed as the "March Against Sharia" in San Bernardino, California, in June 2017. In his video, streamed to his Facebook page and later published on the Red Elephants YouTube channel, James bantered with Rise Above Movement leader Robert Rundo. On camera, James asked Rundo to "say the 14 words," a reference to a neo-Nazi slogan about preserving the white race. Rundo responded by saying, "I'm a big fan of the 14 words."

Later in the video, James filmed Rundo and fellow RAM member Ben Daley running through the crowd, boasting that they had "physically removed" counterprotesters. Rundo added, "We chased 'em down the block, smashed up their car."

Late last year, Rundo, Daley and six other members or associates of RAM were jailed on federal rioting charges. Rundo and Daley have pleaded not guilty and are currently incarcerated while awaiting trial. Two of their co-defendants have already admitted their guilt and taken plea deals.

Segal, of the Anti-Defamation League, credits YouTube and other major platforms with having become more aggressive about policing white supremacist content. Still, he notes, "It's pretty easy still to find anti-Semitic and white supremacist videos online."

Becca Lewis, of Data and Society, a New York-based research center, says YouTube has historically taken a "hands-off, laissez faire" approach to white supremacist content, focusing mostly on eradicating "explicit slurs or threats to violence" from the platform. But white supremacists, she says, have become "extremely adept at masking use of slurs and the inherent violence in their discourse."

"There are certain white supremacist channels that have been running for upwards of 10 years on YouTube," says Lewis, an affiliate researcher with the center.

YouTube did not respond to a request for comment on its efforts over the years to deal hateful content. It did promise to investigate the channels brought to its attention by ProPublica and HuffPost.

The killings in Christchurch are part of an international pattern of attacks on Muslims, which seem to have increased over the past two years.

Since 2016, at least three U.S. mosques have been set afire, and at least three other Islamic institutions across the country have targeted for terrorist attacks.

In January 2017, a man entered a mosque in Quebec City and shot and killed six people. He was sentenced to at least 40 years in prison this year. The killer followed white supremacists, conspiracy theorists and right-wing commentators online, and he was fixated on Muslims and immigrants. He was a fan of President Donald Trump and his Muslim ban.

A.C. Thompson is a staff reporter at ProPublica. His stories, which often examine the criminal justice system, have helped lead to the exoneration of two innocent San Francisco men sentenced to life in prison, and the prosecution of seven New Orleans police officers. This story is published via Creative Commons, and was a joint project of ProPublica and HuffPost.