Henry Diltz was one of them — a hippie musician high on the California counterculture scene, style and music created by the leading edge of the boomer generation as it came of age in the '60s.

He rode a new wave of peace, love, rock & roll and life-and-mind-blowing drugs and experiences to the fore, while rejecting America's pseudo-apple-pie-past and a divisive war.

Along the way, Diltz spontaneously focused a secondhand camera on his friends, onstage and off. He didn't know they were destined to be music icons or that he would be historian for an era unmatched in originality, social daring and unvarnished truths.

Among his friends were Jim Morrison, Jimi Hendrix, Janis Joplin, James Taylor, Jackson Browne, Neil Young, the Mamas and the Papas, the Eagles, Joni Mitchell, the Monkees and Crosby, Stills and Nash. The survivors are still his friends.

"As a musician one thing you learn to do is hang out and work for just a few hours, unless you're recording," Diltz says. "You hang before the show, after the show, on the bus, in the airport. It's a lifestyle I lived four or five years with my own group, Modern Folk Quartet."

That made it easy for Diltz to hang with musicians and to break the monotony and the ice by photographing them. They continue to call him for promotional photos. 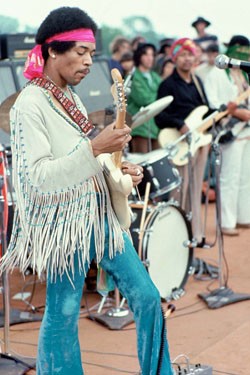 On Feb. 3, old hippies and their sons, daughters and grandchildren — more than 700 people in 90 minutes — came to see a fraction of Diltz's images and to meet the artist at the opening of his first career retrospective and museum exhibition.

Slides have been super-sized and printed to fill two floors of the Southeast Museum of Photography at Daytona Beach Community College. The Kiss the Sky: The Music and Culture of California in the 1960s exhibition is free and continues through June 5. In addition to the prints, a floor-to-ceiling banner shows a few Diltz album covers.

One of the first to enter the gallery is 24-year-old Betsy Dye from Orlando. She longs to connect with the psychedelic generation that she yearns to be part of. By design, Dye's long straight blond hair with bangs screams 1960s. Her vivid orange and green hand-knitted scarf symbolizes her retro style. She knows Diltz from his 200-plus album covers and is anxious to see more scenes and stars from a decade she calls "genuine." She's thrilled to see hippie fashions and never-before-seen candid photos of icons, especially Graham Nash.

"I grew up listening to the music of the '60s with my dad," Dye says. "We've seen Bob Dylan twice. I love Henry Diltz's record covers so much and the music was so great. I have Crosby, Stills and Nash records. I only listen to vinyl. I like the messages the songs give. They are more substantive, and it was possible then to come from nothing and be a star. Now it's all contrived and about labels, marketing and profit."

Among the throng is singer-songwriter Bob Lind, one of the first artists photographed by Diltz in 1966 in front of a California club wall covered with guitars. Later, Diltz played banjo on Lind's hit "Elusive Butterfly." Lind's photo is in the exhibit.

"Even if I didn't know Henry personally, I would have come up from Boca Raton to see his work," Lind says. "He's an artist and catches someone from the inside out. That's what Henry does. To see this as nothing more than a representation of the '60s would be trivializing it. Henry gets it. I can't pick out a bad photograph."

Lind points to a black-and-white shot of Neil Young with his guitar, glancing tentatively off to the side while waiting to perform. "Neil Young looks unsure, vulnerable, very human," he says. "There's no fear, but there's certainly vulnerability. Henry knows these people. He didn't come in cold."

Most of his slides have been stored for decades. Others have been printed and published many times over to symbolize an era. Diltz's own memory is sparked by this exhibition, a unique peek into what he calls his family album.

"These are huge and beautiful and there are 366 of them," Diltz says of the display. "I love the moment and live in the moment. Yet, here I am known for this huge collection of past moments and things. In the '60s we smoked grass and took psychedelics. One thing I learned on psychedelics: There's a moving point through time. We are right here. Nobody has seen the next moment.

"Every one of these pictures reminds me of the time I was there in every single one of these situations. Hanging out with Paul McCartney was a lot of fun. He's a very powerful personality and a wonderful guy. And he's a Beatle.

"The present moment is very exciting because nobody has been here before. We're all in the present for the first time all together. It's an exciting concept. Right now is the answer. I really am immersed with that thought. Therefore, it's odd to have this collection from the past. I'm very happy," Diltz says.

Accidental photographer Diltz's instinctive artistry is unspoiled by training, rules or ego. Since the mid-'60s, he has compulsively viewed his world through a camera. He simply presses a button to seize an instant, as well as found art: images of stars, peace symbols, fire hydrants, beat-up trucks, doors, hearts and strangers to show his friends in impromptu slide shows. He's never had a studio or an assistant.

"I never have a preconceived idea of what I'm going to shoot," he says. "I like to just watch and try to be a part of it. When it looks great I try to take a photo of it, obviously. It makes me feel good just getting a portrait of somebody. Just framing it up. It's physically pleasing in a Zen kind of way. I'm enjoying myself, trying to find some balance.

"You wonder what your calling is. I still play on friends' records. My old folk group gets together every few years. We went to Japan last year for a tour. I think of myself as a musician. I'm just a musician who takes photos. I always think of it as accidental or random."

Diltz wears his long hair in a ponytail and calls himself an existentialist who enjoys the joy of life. "I choose what I want to do. That's what existentialism is, being able to choose your existence rather than have it pushed on you," he says.

Diltz chose to freeze in time nubile young things, stoned and digging each other and music at California love-ins, be-ins and the massive Woodstock and Monterey Pop festivals. Many names are lost to history and hallucinogens, but their faces endure in Diltz images that reincarnate a rebel generation.

Marilyn and Tony Neste, from Flagler Beach, scan Diltz's Woodstock photos at the opening, looking for friends who were there. Marilyn's new job kept her from the event. Tony, who became a sports photographer, parked on the jammed highway 20 miles from the festival. He couldn't make the scene, so he partied with strangers beyond range of the music for two days.

"We're products of the '60s," says Tony Neste. "You never see a photographer's proof sheets. There's something special about that," he says of Diltz' blown-up contact-sheet sequences from Woodstock.

As official Woodstock photographer, Diltz documented everything from the set-up to the unexpected legion of thousands of hippies who gathered to rock to the music played by Diltz's friends, and the battlefield-like scene that was the aftermath.

Museum director Kevin Miller made the Kiss the Sky selections. He spent two weeks at Diltz's Los Angeles home picking through hundreds of thousands of slides.

"This is a matchless and compelling record of the '60s," Miller says. "Henry captured the spirit of the time and shows real feelings for the people. It's an incredible gold mine. The photographs are part of this life and beautifully document key events."

Miller notices a photo of two boys in a tree looking down on a love-in. "They're doing what boys do,' he says. "They're too young to join in, so they are above it all observing."

Diltz says he was doing the same thing at the time, except he was watching from the ground through the window of his camera. He adds that Miller found nuances in some of his photos that he never noticed.

Miller labels as tragic Diltz's shots of the Doors' lead singer, Jim Morrison, inside and outside a seedy bar surrounded by a handful of reprobates. Miller and Diltz speculate on Morrison's possible negative thoughts about his own future in the frozen moments. He alone, with a bemused gaze, stares directly at Diltz, like, Miller says, the key subject in a Goya painting.