Dirty Projectors focus on 'just melody and some words' 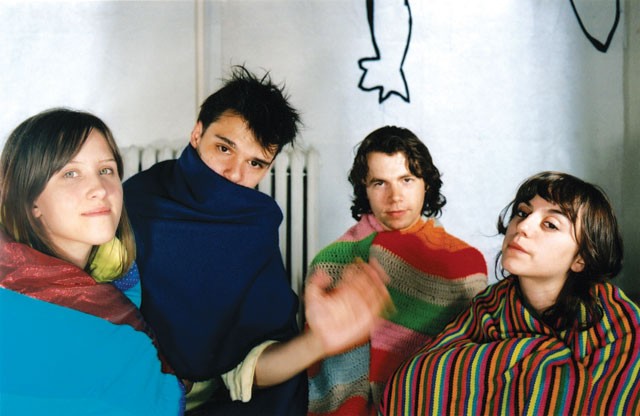 Success didn't come a moment too soon for Dirty Projectors. Three years ago this summer, their van was hit by an out-of-control car that had flown over a median. The van went up on two wheels, flipped over and slid down the freeway. In the aftermath, a tour bus seemed like a much better idea. "Luckily we were at the point [where] we could make that kind of decision because we were pretty traumatized," says singer-guitarist Amber Coffman.

The accident occurred while the band was in Michigan supporting their sixth album, 2009's surprise hit, Bitte Orca. That a band like Dirty Projectors could ever manage a bus tour is a testament to the music business' transformation as well as their skill. They're one of the industry's more idiosyncratic acts with a strong experimental bent balanced by leader David Longstreth's growing facility with melody and hooks. He's a vocal genius, arranging voices with a mixture of grandeur and elegance typically reserved for string quartets. While beatific at times, the vocals are wrought with drama – not so much from the content as from the competing vocals that pass in and out of harmony, teasing dissonance and heightening the dynamics while putting the harmonies in bas-relief.

With Bitte Orca, the band achieved their best balance yet, creating an album that was odd and unfathomable, yet undeniably alluring. Still Longstreth felt something missing: an emotional center, an absence he remedies on their latest outing, Swing Lo Magellan. In the process he's pared the music back to its essential elements as he seeks greater clarity, concision and directness. He compares their change to music made by his Brooklyn neighbor and recent collaborator, Bjork.

"What I like about a lot of Bjork's music is it's incredibly imaginative, incredibly original on a musical level, but it's also so direct emotionally," he says. "That is one of the things that's different about this record. It maybe puts the emotion in front of the kind of formal musical invention. Or maybe it just does a better job of speaking from the heart."

Swing Lo Magellan was written and recorded in a remote upstate New York cabin, taking shape over many months as members filtered up to record parts and the album's shape evolved.

"We started going up there in January of last year and didn't move out of that place until the end of November. We didn't plan on being up there that long but it was just sort of a thing that you can't really put a timeframe on," says Coffman, Longstreth's girlfriend. "Dave just wrote a ton of different songs. He kind of went on a journey that year. And it was not clear in the beginning what the album would be or sound like. It was a journey, definitely."

For Longstreth, it was a matter of returning to core elements he'd lost sight of while fashioning his intricate arrangements.

"When it came down to the simple, elusive thing of just writing a song … just a melody and a lyric, I thought, 'I haven't really just looked at that,'" he says. "The idea is that all of these songs on this record you could just strip them down to just melody and some words."

The Dirty Projectors with Pop Etc.