I didn't have to look far to find a Lime bike. Less than a block from Orlando Weekly's front door, before I even had a chance to download the app, I rounded the corner of Pine Street and Orange Avenue and there sat three lime-green, lithium-powered bicycles, neatly lined up in a row.

Like municipalities across the country, Orlando is getting hip to the micro-mobility craze, following the successful implementation of roughly 500 Lime e-bikes on the University of Central Florida's campus in August. Now they're everywhere.

Once you track down a bike on the app – which uses GPS to help you find them and to allow Lime operators to manage the fleet – you register your credit card info, scan the QR code located between the bike's handlebars, agree to pay $1 to unlock the bike and then you're off, for 15 cents per minute.

This is urban transportation in 2019: At a top speed of 14.8 miles per hour – that's where the electric assist maxes out – you can almost coast from Point A to Point B, for a few bucks at most. If the weather permits – though it's a rarity in Florida – you don't even have to break a sweat.

In October, city officials cleared the way for the electric bike and scooter rental company Lime to operate downtown, making it the first city in Florida to initiate a full fleet of e-bikes under Orlando's new "dockless" ordinance. The law doesn't cover scooters, and bike-sharing companies that use docks have been operating in the city for years, but this ordinance, a one-year pilot-program, allowed for up to 500 dockless Lime bikes to proliferate across town.

With dockless bikes, convenience is the point. When you get where you're going, you can leave the bike wherever – no need to find a docking station. The only rules: the bikes can't be parked in places that block traffic, pedestrians or handicap-accessible ramps; and 24-hour customer service is required, with the added requirement that the company remove bikes within two hours. Penalties are assessed by Lime through the app, a city spokesperson says.

Aside from that, the city's regulations are pretty loose.

But every new gizmo has its glitches. And while city officials are celebrating the program's speedy success – and for good reason, early figures suggest – the dockless e-bike craze has its downside, too, from the consequences for already-established bike companies to the annoying pile-up of bikes on street corners. 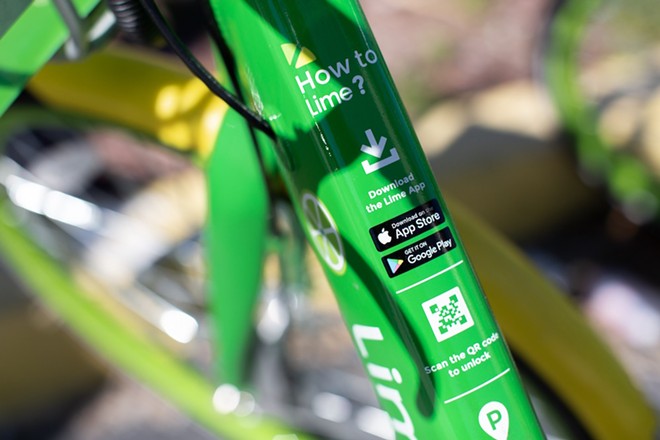 Between Nov. 20, when Lime began operating downtown, and the end of 2018, the city says the company accumulated 17,389 rides, or about 414 per day. Since then, the bikes have become even more popular, officials say.

But Lime wasn't Orlando's first bike-share company; Juice Bike Share has been operating here since 2015. And even then, the company wasn't alone, as a number of other mom-and-pop shops have been renting to pedal-pushers since before the era of iPhone apps.

Seiji Schoppert, the operations manager at Juice Bike Share in Orlando, says he's witnessed a slight downturn in folks using his company's bikes since Lime showed up. He says recent winter weather might be to blame, and that it's still too early to tell if any long-term harm will be done financially.

The main difference between the two rival companies: You can leave Lime bikes (the green ones) anywhere, while you have to leave Juice bikes (the orange ones) at a dock station to complete your ride, though for an additional fee, you can leave the bike at a regular bike rack.

Through 2018, according to numbers provided by the city, Juice totaled 24,053 rides using its roughly 200-bike fleet, compared to the more than 17,000 rides accumulated by Lime in roughly a month and a half.

"They have significantly more rides right now than we do," Schoppert says. "So I can't say if they're able to capture more rides because of a different system. The only thing I can really say is that we're still getting new users, which I'm really impressed at. The people who have been riding with us for years seem to still be riding with us."

Other local bicycle rental outlets have begun to feel the pressure.

"There's more sources of revenue to the shop than just the rentals, but I've seen an almost 50 percent reduction in rental rates," says Brian DeFoe, owner of Elite Road Bike, which rents bicycles to visitors.

DeFoe says that when he first rented his shop's property on Lake Baldwin Lane last year, he asked the city if he could position bikes in front of his location to advertise rentals. But he says officials wouldn't allow it, citing an ordinance that states bikes may not be parked in a manner that obstructs pedestrian traffic.

"Then, a few weeks later, the Lime bikes were introduced," DeFoe says. "My argument is they're basically taking their bike rental product and they're about to put it not only outside [my shop], but anywhere they want to. It's kind of a slap in the face to me."

DeFoe's grievances don't end there. In an attempt to help out cyclists while also promoting his business, DeFoe says he offered to install bicycle-repair stations along Lake Baldwin Trail. He told the city he wanted to put his business name and phone number on the stations. But city officials nixed that idea, too.

"And now you have Lime bikes and there is literally five or six of them on the Lake Baldwin Trail, just sitting in the grass or falling over in the grass or whatever," DeFoe says. "So, like, Lime comes in and they basically get to advertise their brand everywhere they want. It's hard to deal with, but it is what it is, I guess. I don't really see that I have a leg to stand on."

Judging by the company's rental numbers, both residents and visitors have taken to the dockless bikes.

Holly Tavel, a Park Lake Highland resident, says she enjoys Lime's convenience as she saves up money to buy a bicycle of her own.

"I had used the orange [Juice] bikes once, but the orange bikes, they're less convenient, obviously, because you have to return them to a [docking] station," Tavel says. "I really like that the Lime bikes, you can just kind of leave them wherever and they're just around the neighborhood."

So with Lime's success, what's next – scooters?

"We made the decision when we put the [dockless] ordinance together that we would not consider scooters from anyone, including Lime, for a year," Hattaway says. "People keep asking. Of course Lime talked to us, and we said we would like to see how you operate your system, how you deal with customer complaints, how you deal with citizen complaints for a year before we consider your scooter system."

Across the country, municipalities have struggled with scooters' side effects. Citing safety concerns, some cities – including Miami, Boston, Nashville, Seattle and Beverly Hills – have banned e-scooters, while others have imposed tight regulations and steep fees.

Many urban planners view both scooters and e-bikes as vital to what's known as the last mile – or the "missing mile" – of public transit. In other words, they provide a segue for those who regularly use public transit.

You can take a bus or train for as far as you can, then track down a Lime bike to ride for the remainder of your commute. Being able to do that easily and efficiently makes it less likely that you'll have to rely on a car.

"We are always looking at innovative ways to expand and enhance mobility options and make Orlando a more bike-friendly city," Mayor Buddy Dyer says. "We are proud of our recent efforts to amend our code to allow for the operation of businesses who can provide bike sharing for our residents and visitors. As we move forward we will continue to explore opportunities like this to further viable, healthy and environmentally sustainable transportation alternatives."

While e-scooters have proven problematic elsewhere, bicycles are notoriously dangerous in Florida.

That's in part due to terrible road design, according to researchers at Florida International University who reviewed police reports for the 2,954 bicycle-involved collisions at "hot spots" across the state between 2011 and 2014. They found that drivers were at fault in 46 percent of the crashes, while cyclists were at fault 30 percent of the time. According to their report, a majority of these incidents occurred because of the cross-traffic intermingling of bicyclists and drivers, a significant design flaw.

But, comparatively speaking, cycling isn't the most dangerous thing you can do in Florida. In 2017, 2,724 Floridians died due to firearms-related incidents, according to figures from the Centers for Disease Control and Prevention; there were 138 pedal-cyclist fatalities in 2016, according to the NHTSA report based on data from the National Center for Statistics and Analysis.

And there are lots of small benefits. The University of North Carolina Highway Safety Research Center found that 60 percent of the pollutants created from motorized transportation is produced during the first few minutes of the car ride. Starting the car cold and then driving up to four miles produces more air pollutants than driving on a long trip.

That's where companies like Lime come in, but for some folks, old habits are hard to break, as Lime Florida general manager Jed Fluxman knows.

"Everyone's entitled to their opinion, and everyone's going to have one," Fluxman says. Most of the complaints he's received have focused on the e-bikes being nuisances, left in inconvenient, in-the-way places.

"Look, more than twice a week people deal with garbage bins outside of their houses on sidewalks and they don't say a thing. You're going to deal with people that just don't like change. But I think that for every one that complains, you've got 10 more [people] who are saying how it's changed their lives, they're getting to work, they're able to have other opportunities that they didn't have before."

After my Lime bike ride through town – in which I dodged thick afternoon traffic while burning 40 calories, according to the Lime app – I parked the bike on the corner of Washington Street, catty-corner to the railroad tracks and a rundown law office. Assuming that spot was just as good as any other, I flipped out the kickstand and walked off toward my car.

By the time I pulled out of the parking lot, someone had already knocked the damn thing over. You can't make everyone happy.