Does Disney's new Star Wars: Rise of the Resistance ride in Orlando really live up to the hype?

Imagine that a long-awaited installment in your favorite film franchise is finally being released, and a state-of-the-art movie theater is being built to exclusively screen it. Fans arrive from around the world for the big debut, ogling the opulent venue and stocking up on pricey concessions and souvenirs. But after enjoying the trailers and short features, instead of screening the main attraction, the audience is asked to exit and return in a few months when it's finished.

For right now, I'm comfortable calling Rise of the Resistance the best theme park attraction on this planet ... or any other. tweet this

You can imagine the box office riots if something like that happened, but theme park visitors faced a similar situation over the summer when the new Star Wars: Galaxy's Edge lands opened in Disneyland and Walt Disney World without their marquee attraction, Rise of the Resistance, which Mickey advertises as the most "epic" dark ride ever created. I attended the openings of the expansions on both coasts, and was duly impressed by the immersive detail that went into the Millennium Falcon simulator and surrounding shops. But without the hyped headliner to occupy them, guests quickly began to grumble that anticipated elements – like live characters and interactive activities – were less abundant and in-depth than expected. 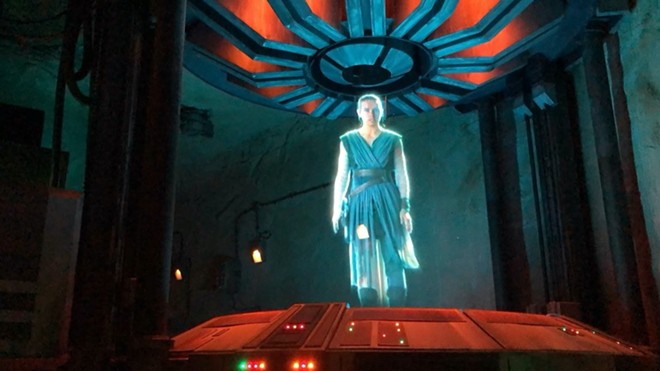 As a result, initial attendance at the lands was significantly below what industry analysts (including myself) predicted, although Disney ultimately reported quarterly per-capita spending increases – thanks in part to $200 custom lightsabers and $100 droids – that offset the smaller crowds. However, as of Dec. 5, the Force is definitely with Disney's Hollywood Studios again, as visitors have been lining up daily before dawn to experience the newly opened Rise of the Resistance.

I awoke at 4 a.m. on opening day in order to be among the very first guests through the turnstiles when DHS threw open its gates at 5:22 a.m., over 2 ½ hours ahead of schedule. In a surprise move, rather than allowing a long standby queue to form for the new ride, Disney implemented a smartphone-based "virtual boarding pass" system to distribute crowds throughout the day. I was assigned one of the morning's first groups, and was called to enter the attraction by 6:30 a.m., 90 minutes before the day was even supposed to start. It was so early, I was able to secure a second boarding pass (an option Disney has since eliminated) before they ran out for the day around 8:30 a.m.

Moments after I exited from my first ride, the attraction experienced "technical difficulties" that forced an evacuation of all the guests behind me. However, it was restored to operation within the hour, and continued to run into the evening. And when it finally shut down several hours before the park closed, guests who hadn't been accommodated were given Fastpasses and free park tickets to return on another day, an unusually generous gesture.

While the opening-day hordes were entirely expected, similar scenes have repeated themselves every morning since, with all virtual board slots being snagged before the park's advertised opening time. And since right now is one of the slowest times of the year for theme park attendance, the madness can only multiply as holiday visitors descend. So, does Rise of the Resistance really live up to the hype, and could any theme park ride be worth losing so much sleep over? To borrow an expletive from my other favorite sci-fi universe: Frak yes!

Without divulging any spoilers, suffice it to say that Rise of the Resistance combines multiple types of attractions – including a simulator, a trackless dark ride and an elevator drop – into an immersive 20-minute adventure set between Episodes VIII and IX, which thrusts guests into the middle of the war between the fascist First Order and the heroic Resistance. As recruits journey from a hidden base on Batuu into the belly of a Star Destroyer and back again, they encounter the sequels' stars as lifelike projections (performed by Daisy Ridley, Dominic Monaghan and fellow original cast members) and uncannily expressive audio-animatronics. 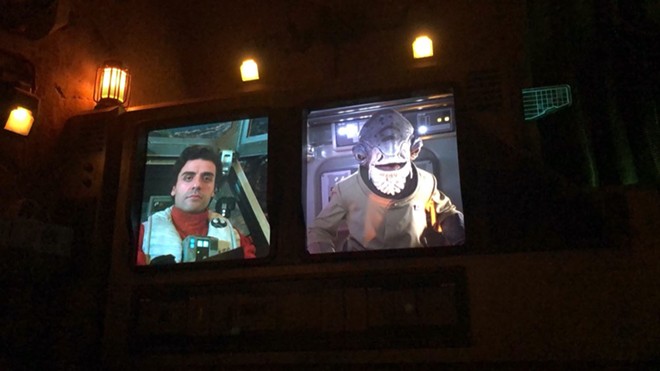 None of ROTR's major components are entirely novel, but no single attraction has integrated so many advanced elements into one seamless package since Las Vegas' Star Trek: The Experience closed more than a decade ago. And while Universal has a reputation as the king of screen-based rides, lead Imagineer Scott Trowbridge has finally topped the work he did on Islands of Adventure's Spider-Man, engineering windows onto a fictional galaxy that are indistinguishable from reality. More important than any technical innovations, the ride's atmosphere and subtle aesthetic details – from the convincing projection-mapped laser blasts and pulse-pounding John Williams score to the icy arrogance of the employees playing First Order officers – make Rise of the Resistance viscerally feel like Star Wars in a way that was absent from Solo and The Last Jedi.

For G-force junkies who could care less about preshows and backstory, Hagrid's Magical Motorbike Adventure still provides this year's best new adrenaline rush; although it induces sensory and emotional overload, as far as physical thrills go, Rise rates somewhere Seven Dwarfs Mine Train and Winnie the Pooh. But even without gut-churning jolts, the ride succeeds in finally fulfilling Galaxy's Edge's promise of immersing guests in their own Star Wars saga. A successor will someday dethrone it, but for right now I'm comfortable calling Rise of the Resistance the best theme park attraction on this planet ... or any other.