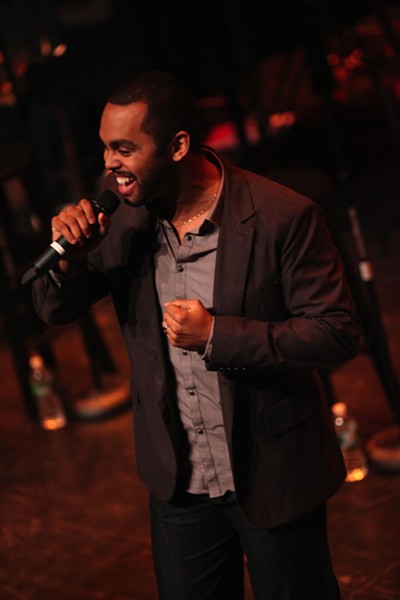 Life may not actually be a cabaret, old friend, but cabaret is surely one of the sweet, sophisticated joys of life. And thanks to Mad Cow's ninth annual Orlando Cabaret Festival, local fans can once again experience the delights of musical entertainment on a human scale - where just a piano and the unadorned human voice are all that is necessary for a completely satisfying sojourn at the theater.

This year, the festival features 40-plus shows over the course of 17 consecutive days, with local crooners being joined, as usual, by out-of-town headliners. This past weekend, I was able to attend four different perform-ances. Here are my thoughts and impressions:

It Was a Very Good Year 1966: Four stylish singers present music from the mid '60s - everything from Broadway shows, to pop hits, to movie and television theme songs. The engaging cast includes Priscilla Bagley, Sara Catherine Barnes, Kevin Kelly and Michael Kelly, with musical direction by Terry Thomas. This pleasant blast from the past repeats last year's format, and with the exception of Michael Kelly, features the same performers.

Included are tunes from Broadway's Mame, Cabaret, It's a Bird, It's a Plane, It's Superman, and I Do, I Do. Popular music gets its due with renditions of "Cherish," "These Boots are Made for Walkin'," "When a Man Loves a Woman," "Mack the Knife," "What's New Pussycat," "The Sounds of Silence" and medleys of songs by the Mamas and the Papas, and of course, the Beatles.

The most amusing part of the show is a collection of theme songs from popular TV shows like Bonanza, Bewitched, Star Trek and I Dream of Jeannie. Who knew that these catchy jingles actually had lyrics?

Jesse Nager - Songs I Didn't Get to Sing: Jesse Nager is a veteran of several Broadway shows and national tours and the founder of the Broadway Boys, a sextet of musical theater singers who tour and record extensively. He calls himself a tenor, but typical tenor notes are actually at the bottom of his range. Nager's voice reaches high into the female vocabulary, and it definitely takes some getting used to.

In this particular show he tells us a little about his early career and treats us to a pastiche of musical numbers that he always wanted to sing in shows, but never seemed to get the chance. That is not surprising, considering that most of the numbers he coveted were originally written for, and sung by, women.

Nager is a charming performer, but there is little variation among his choices. Many of the songs he offers are overly dramatic and somewhat angst-ridden, and after a while, the high emotional keening becomes a bit oppressive. A little more modulation and moderation would help balance his act. John Mason does terrific work as his pianist and Andrea Canny shines as a guest artist on a few numbers.

E. Mani Cadet - Black on Broadway: E. Mani Cadet is joined by Tonya Phillips Staples and Larry Ballad, with Steve McKinnon on piano, in a celebration of "some of African-Americans' greatest moments from opera, jazz, theater and Motown." This show is not to be missed! From the opening number, Feeling Good (not actually from a black show, this song was written by Anthony Newley and Leslie Bricusse for the 1965 musical The Roar of the Greasepaint - the Smell of the Crowd), you know that you are in the presence of a trio of highly skilled and classically trained musical performers.

Cadet and company then proceed to take us on an exhilarating musical journey that includes songs from Scott Joplin's opera, Tremonisha, George Gershwin's Porgy and Bess, the musical revue Ain't Misbehavin' and the Broadway shows, The Color Purple and The Wiz. The singing is exceptional throughout as are the harmonies and the humor. Highlights include a Stevie Wonder impersonation in "Superstition" and a gorgeous version of "Midnight Train to Georgia."

It Was a Very Good Year 1956: The troupe of Bagley, Barnes, Kelly and Kelly go back a decade with songs from the musicals Bells Are Ringing, L'il Abner, Kismet, My Fair Lady and Peter Pan. There is some doo-wop, some Elvis, a Righteous Brothers tune and even some Gogi Grant.

All four performers have their strong moments, though the two women display a much broader range in their deliveries. The gentlemen are actually at their best when backing up the ladies with smooth harmonies.

The Orlando Cabaret Festival continues at Mad Cow through May 15. I can't wait to go back. Maybe life is a cabaret, after all.