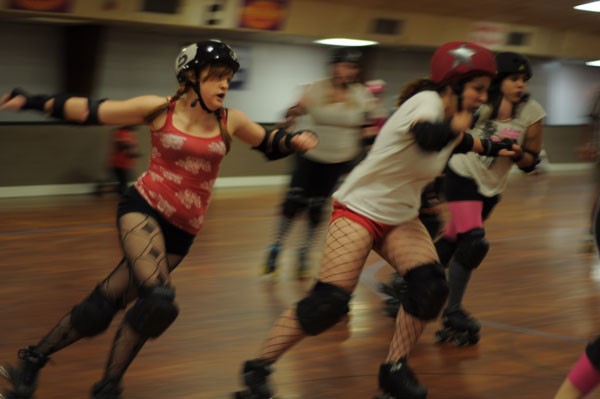 Darth Vader, Disney’s Princess Jasmine and a handful of other costumed kids strut around the roller rink at halftime during the Oct. 10 Orlando Psycho City Derby Girls game. Michael Jackson’s “Thriller” pumps through the loudspeakers, followed by a voice that announces the Halloween costume contest winners: The girl in the Chinese takeout box and the moon-walking cowboy score free skating tickets. The rest  get candy bags.

It isn’t the kind of scene one would expect at a roller derby, an old-school sport that, during its resurrection over the past decade or so, has become synonymous with raunchy nicknames, short skirts and gratuitous violence. But the Psycho City Derby Girls, a new flat-track roller-derby league that held its inaugural matches in September, is trying to clean up the sport’s image. They still embrace some of the suggestive, theatrical elements of the game – players’ uniforms include fishnets and hot pants and team members adopt punny, violent nicknames – but they’ve cut back on the tawdriness in the hope that they’ll attract bigger crowds (including families).

When halftime ends, the Bellevue Bombshells and Sunnyland Slammers, two of the three teams that make up the league, resume their bout. Skaters with names like “Whiskey Christy,” “Killa Thug” and “Mary Stabher More” collide while careening around the tape-marked track at Universal Entertainment and Skating Center on South Goldenrod Road. More than 700 people attended the league’s debut game last month, but today only about 200 have come out to watch the tattooed, pierced and made-up women pummel one another.

In flat-track roller derby, a contact sport in which women on roller skates race around a rink in teams, players gain points for their teams by breaking through a pack of skaters while members of the opposing team try to block, grab or shove them out of position. During the past decade, the sport has experienced a grass-roots revival of sorts – a reinterpretation of matches televised in the 1970s that emphasizes athleticism, punk aesthetic, sex appeal and brawling.

The Psycho City players may resemble the lavishly styled skaters featured in A&E’s series Rollergirls and the Drew Barrymore-directed 2009 film Whip It, which have helped launch roller derby into the mainstream American psyche. But leaders of the league say that unlike the leagues portrayed in either the series or the film, Psycho City wants to be about more than catfights and skimpy outfits.

“We want it to be classy,” says Sharisse “Felix Bashit” Roberts, one of Psycho City’s founding members. “We are not about the tits and ass, but we are still sexy.”

The Psycho City Derby Girls were formed by members of a now-defunct roller derby league from DeLand, called the Florida Rollergirls. The league formed in 2006, but drama and low fan attendance contributed to the team’s demise by 2008. The league then split into two teams: the Tourist City Terrors and the Sintral Florida Derby Demons. The Terrors team soon collapsed, however, and the Demons are based in South Daytona, so the Orlando area was without a team.

In the fall of 2009, several former Florida Rollergirls and a dozen other derby veterans started Psycho City. They hoped that basing the league in Orlando would give it the potential for a larger fan base, and therefore greater attendance at games. They also decided to ditch some of the more crass elements of derby to draw more families to the sport.

The first new rule put in place was that players need to abandon offensive names in favor of family-friendlier ones: Women who played for other teams in the past under names deemed too vulgar for Psycho City (Snatchface Riot, for instance) had to rebrand themselves (Snatchaface Riot). Another new rule: Keep it clean for spectators. That means no swearing, lewd gestures or fighting is permitted in front of crowds. Players who break these rules run the risk of suspension from the league. But some wonder if the decision to draw the line at PG-13 risks alienating the audience that enabled roller derby’s resurrection: drunken college students and people looking for hardcore alternative  entertainment.

Another aspect of Orlando’s roller derby revival that presents some problems is that the league affiliated itself with the Old School Derby Association as opposed to the more popular Women’s Flat Track Derby Association. OSDA has a more inclusive format which favors expansion should a league want to begin a juniors’ or men’s team. But that decision comes at a cost: Currently 98 leagues around the country are affiliated with the WFTDA, while five play under OSDA rules (four of those leagues allow men and women to play together). So far, the Psycho City Derby Girls are the only OSDA-affiliated league in the state, making competition scarce.

Despite the ups and downs of previous leagues, Psycho City Derby Girls have seen a burgeoning interest in participation. In mid-October, the league, then made up of about 30 skaters, held their first open tryouts and drafted about 60 new recruits.

Although the focus at the moment is on training the new team members and organizing games, team leader Melissa Biddle says that eventually it would be nice to organize youth leagues as well.

The transition from wild to mild hasn’t been without its struggles, though. Until recently, Tuesday night Psycho City practices at Universal Skating Center were marred by signs of frustration and occasional outbursts. A founding skater Kim “Koo Velvet” Valerio was suspended (fellow players say it was for doing something “unbecoming” a league member), but since that time, the league has elected a new 10-member board to help it navigate the difficulties typical of any startup venture.

“It’s like being in a band,” says Psycho City player Katie “Killa Thug” Bloedorn. “Imagine how hard it is for four people to get along, much less 40.”

The next Psycho City Derby Girls game is on Nov. 14, and members say they are hopeful that, despite growing pains, the league is now united – if not in complete agreement, then under a shared love of the sport.