Dr. Phillips Center for the Performing Arts opens in a burst of confetti and clichés

The facility makes a fabulous first impression, but this is just the beginning of the story 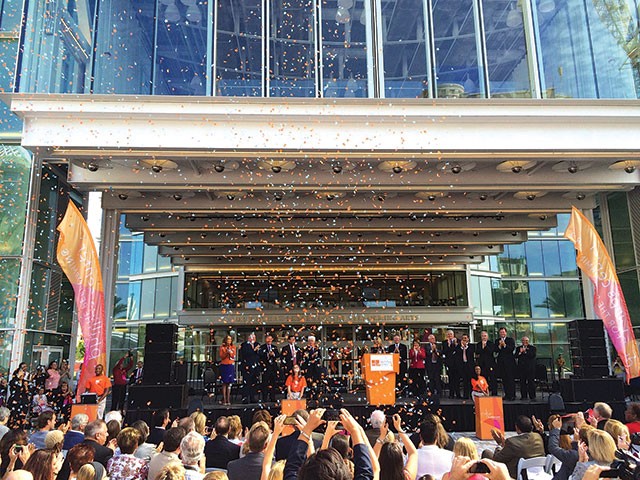 After decades of debates, design changes and construction delays, the day finally dawned – the Dr. Phillips Center for the Performing Arts debuted Thursday, Nov. 6, in a ribbonless ribbon-cutting ceremony attended by most of Orlando’s A-list, plus me. The grand premiere of the Dr. Phillips Center – don’t call it DPAC, DPCPA, or the Doc, please – was emceed by veteran performer Mary Thompson Hunt and featured a parade of politicians (including Mayors Dyer, Jacobs and Crotty) alongside business leaders from Disney, Darden, CNL and the Magic. All extolled the new downtown center’s importance with a combination of dubious statistics (chairman Jim Pugh proclaimed that there are only “36 others like it in the world,” which seems low) and redundant platitudes (dangerous new drinking game: Take a shot every time someone calls the center “world-class”).

Sitting in the sun-drenched plaza, with the semi-demolished historic Round Building behind me, it was a struggle to maintain my customary cynicism about what this years-in-the-making edifice means for Orlando’s arts community. But during the speechifying I noted a curious omission: Though there were plenty of effusive thanks for the complex’s deep-pocketed donors and well-compensated consultants, there was hardly a word about the local artists whose willingness to work for subsistence-level incomes makes Orlando’s entertainment industry profitable (or even possible) in the first place.

Eventually, the ceremony ended in a burst of confetti and it was time to take a guided tour. It must be said that, despite my misgivings, the facility makes a fabulous first impression, especially its centerpiece 2,700-seat Walt Disney Theater. I was never as down on the Carr auditorium as its fiercest detractors, but Dead Bob’s critics will be delighted by the new theater’s features: dual orchestra aisles, spectacular sightlines and acoustical engineering by expert Damian Doria. The new amplified hall has more in common with the Mickey Mouse mega-corporation down the road than just a name; though it shares similarities with performing arts centers in Atlanta and New Jersey, I was reminded of the theaters aboard the Disney cruise ships and the Hyperion in Anaheim’s California Adventure. I’m confused by a few design decisions (exposed industrial conduits overhead, seemingly spill-prone floor-level cupholders) but it was undeniably thrilling to take selfies on the shiny new stage with thousands of empty seats behind me.

Though not the focus of as much attention, I found the 300-seat Alexis & Jim Pugh Theater even more interesting, with its flexible seating and potential for arena-style staging. I loved the gorgeous glowing artwork on the ceiling by Tom McGrath; I just hope it doesn’t distract during performances. The upper-level balconies provide some unusual perspectives, but be careful of tipping off them while trying to get a good look. The facility surrounding the stages is equally spectacular, with dizzying overlapping staircases in the towering main lobby and an 80-foot-tall “wave wall” of hand-sanded Venetian plaster, whose multicolored glow can be seen from the surrounding freeways. If I were planning a blowout party, the DeVos Family Room (with its elephantine sliding glass wall overlooking the Seneff Arts Plaza) would make a great venue. Even the backstage areas are relatively luxurious, including spacious dressing rooms and a dance rehearsal hall with floor-to-ceiling mirrors. But while it’s an undeniably handsome building, its trendy cement-and-steel aesthetic leaves me somewhat cold; if it weren’t for the occasional pop of purple (and Harriett Lake’s pink powder room) the whole place would be as colorless as Pleasantville.

Celebrity concerts and Broadway galas aside, this isn’t the end of the Dr. Phillips Center story, but the beginning. For starters, there’s still the third acoustic hall to finish for the Philharmonic. According to their FAQ, “commencement of the third theater is currently being determined,” but Winter Park Vice Mayor Steven Leary announced a 10-year, $1 million interlocal funding agreement, in hopes of getting other municipalities on board to “move more quickly [and] get this finished.”

Beyond that, it will be years before we can truly assess the Center’s impact on our local arts community, for good or ill. I’m grateful to attend Dr. Phillips performances as press, because I couldn’t afford tickets otherwise; I’m even less optimistic about my ability as an independent producer to ever rent even the facility’s smallest stage. While boosters may be ballyhooing last Thursday’s opening as Orlando’s “best day ever,” I’ll wait a few years and see if any substantive benefit flows to our grass-roots arts groups before I break out the mimosa to toast Dr. P’s new digs.