Drink around the world at Epcot

A guide to help you navigate the theme-park drinking adventure

by Adam McCabe and Brendan O'Connor 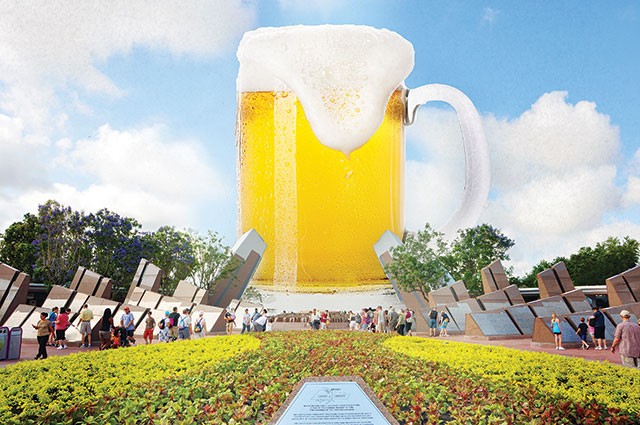 Sometimes you just need a drink, and one of those times is when you go to Walt Disney World. The Happiest Place on Earth can honestly be enough to drive you to drink. But after Disney razed Pleasure Island, the only place in the park left where mommy and daddy can get adequately sauced is Epcot. Eleven internationally themed areas – including Canada, Japan and France – not only serve great food, but also, more importantly … drinks! It’s one of the best beer crawls in town, and we’ve broken it down for you by nation.

Skip the Cantina and saunter over to La Cava to knock back a Dos Equis with your flight of tequila shots. Make sure to wash ’em down with that weird thimble of salsa they give you. Does that actually happen south of the border? Who cares! You’re the lord of Mexico! Leave the pyramid and start trekking to Norway. Look out for the strollers: For some reason they tend to congregate at the bottom of the pyramid. Think of it as your first sobriety test.

Now it’s time to ride the Maelstrom. You know, the ride that gently explains how Norway was once engulfed in black light until trolls invaded and then oil refineries or something. The key here is to have all your friends grab their imaginary paddles and row your Viking boat the entire time. That way, when you get to the waterfall sequence, the leader of your party gets to scream “ROW, FOOLS!” giving you and your mates the cue to paddle for dear life and cheer in victory as you just barely survive the fall. You’re welcome. Did all that troll hunting make you dizzy? We thought so. Wash it away with a Carlsberg (souvenir mug, too?), take your token “Viking helmet” picture in the gift shop and move on to the land of takeout. Pro tip: Norwegians are super hot and love drunk tourists.

I know the food smells great, but don’t eat or you’ll ruin everything! Instead, grab yourself a Tsingtao from Joy of Tea. The draft and bottle are the same price, so get the draft, dummy. Pro tip: Don’t walk into the antique or jewelry sections of the gift shop. You’ll break everything and everyone will hate you.

Ah yes, the land of schnitzel and attractive, beer-slinging International Program participants. God bless migrant labor. Well, what are you waiting for? When in Deutschland, do as the Deutschlandians do: Grab a beer! There’s Altenmünster Oktoberfest or Hövels in the Biergarten.

This is where you’ll probably want to stray from our beer-only menu, but the Moretti Italian beer is 7.2 percent ABV. So drink the beer; we’re carb-loading for the rest of the walk!

Before entering the ol’ U-S-of-A, you have to brave the drunken incline: the slightly raised uphill slope right before you reach the amphitheater. Disney clearly wanted the USA pavilion higher and more visible than the rest of the other countries, and your blood alcohol level is too high for that shit. But this is your quest, Bilbo, and you’re not about to let Uncle Sam keep you from destiny. Grab a Sam Adams, because America. It’s not the best thing you’ve had all day, but it’s a stamp in your passport.

First things first: There’s a beer stand right at the entrance of this area that’s home to one of the strangest anomalies on the planet – frozen beer. That’s right, they took your frothy life-water and turned it into a Slurpee. You may ask yourself, “Self, why wouldn’t they serve it outside of Epcot?” Because it tastes like an ice-cold penny marinated in urine, that’s why. So instead, double-fist a non-frozen Kirin and a glass of sake with your pals. Take your time, though … you’re probably feeling it pretty hard right now.

Now may be the moment when you start noticing that a security guard is following a little too closely, so dodge into the crazy maze that is Morocco and lose him like your favorite Riff Raff Street Rat. When the coast is clear, grab a Casa and get the hell out of Dodge.

This is such a tough stop on your journey, friends. This is where you have to make a choice: Grand Marnier and Grey Goose Orange Slush, or stick to your guns and get the – gag – Kronenbourg. If you managed to slam back the lame beer in Morocco, then you can handle this. An aside: Do not put your face on the windows of the French restaurant. It’s funny in your head, but you will end up on the internets as that weird guy from a theme-park window.

You can go the easy route and grab a smooth, sweet little cider to wash down that clump of shame in your throat, or you can grab the souvenir stein. Go-big-or-go-home time! The stein will let everyone know, as if they didn’t already, that you have been drinking all day and could very well vomit on their mouse-clad baby at any moment.

Feel free to take a rest in the little park behind the shops where the fake Beatles band plays. Nobody is there to judge you. The rose bushes can keep a secret. Let it all out, wipe your chin, lighten your load. We’re telling you this is a good spot to vomit.

This is the end, friend. You’ve made it all the way around the world. Grab a Moosehead by the horns and get this shit over with. You can barely stand. Your face is flushed. You think it’s hilarious that the super-nice kid in the popcorn hut is wearing red plaid. If you hear bagpipes, get out of there: Dancing to Off-Kilter sounds like fun, but if you start hopping around to their siren call, you will end up in a severe beer coma. Instead, stagger into Le Cellier and order some cheese soup and pretzel bread to go. Sit down by the McDonald’s on the promenade and feed the ducks until you’re ready to stand up and do it all over again.