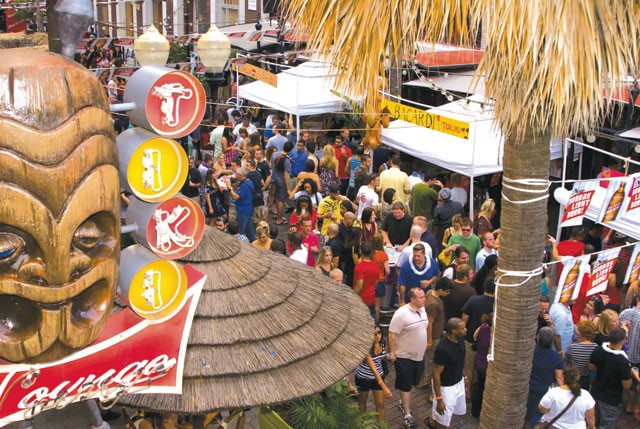 You gotta give props to a liquor with such history: Way back when, British soldiers were issued a ration of rum as a combat motivator, and those who went above the call of duty were rewarded with an extra mug of rum for a job well done. The British royal navy mixed the stuff with sugar, water, beer – and sometimes a little lemon juice to improve the flavor – to make grog. Pirates mixed it with water, sugar and nutmeg and drank it as something they called bumbo. The Pogues name-checked it in their 1985 album Rum, Sodomy & the Lash. Hemingway liked his rum served with sugar, lime juice, mint and sparking water – aka, a mojito, once the drink of a badass, more recently a favorite among 20-something sorority girls who like their liquor refreshing and sweet, like Orbit gum.

These days, people like to foul rum by mixing it with Coca Cola (c'mon, rum is a sugar-based alcohol – why do you need to put corn syrup into it to improve the taste?), but it's also the main ingredient in a few of our favorite drinks: the Mai Tai (rum, Curaçao and lime juice), Planters Punch (two kinds of rum, three kinds of juice, Grand Marnier), the pina colada (rum, coconut milk, pineapple juice). Yeah, we like old-lady drinks. So what?

If you like to partake of the rum, check out Wall Street Plaza's eighth annual celebration of all things rum this weekend. There will be more rum than you can reasonably be expected to taste in a day – three hours of unlimited sampling from Captain Morgan, Don Q, Sailor Jerry, Ron de Jeremy Rum (yeah, named after that Ron Jeremy) and more – as well as daiquiris and punches and mixed drinks. Music by 506 Crew and the Supervillains, plus a chance to win a trip for two to San Juan for a VIP tour of the Don Q rum factory where you can … sample more rum.

Warning: the beverage of pirates, British sailors and Hemingway will kick your ass. Pace yourself or you'll end up with a hangover that'll make you feel like you have a tiny, drunken pirate banging around in your head.