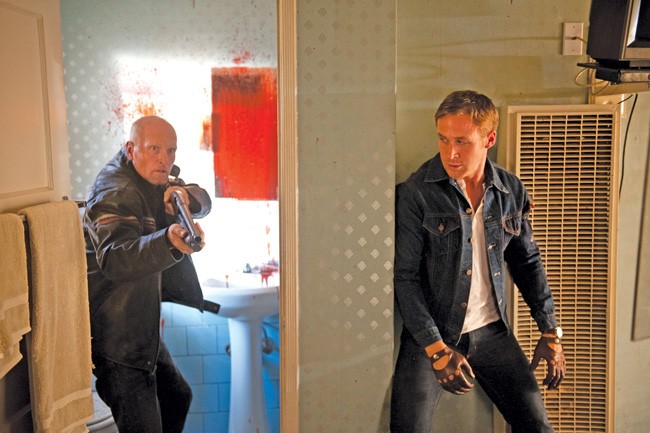 With ticket prices soaring and American audiences rubbing their eyes from cumulative CGI fatigue, the 2011 post-summer movie season faces sizable pressure from moviegoers seeking meat and potatoes to counterbalance their sludgy, junk-filled digestion. Few experiences deliver that substance like watching Brando-esque young actor Ryan Gosling doing, well, anything. Following a couple of productive years squashing his Mickey Mouse Club-Young Hercules teen-mag image in thoughtful fare like Half Nelson and Lars and the Real Girl alongside one big Leo moment (The Notebook), Gosling has emerged, in the last year or so, as possibly the most captivating, dangerous, incendiary actor of his generation. So the judgment that Drive – a style experiment in the vein of 1980s neon-smeared, Tangerine Dream-scored action poperas from nervy director Nicolas Winding Refn (Bronson) and Oscar-nominated screenwriter Hossein Amini (The Wings of the Dove) – is more like a beautifully dressed diet plate that nonetheless requires a man-sized proviso: That’s still the brilliant Gosling onscreen, and that alone probably merits your money.

The actor plays an unnamed Hollywood stunt driver who, he explains via opening-credits voiceover, moonlights as a getaway driver for thugs and vandals. He retains minimal knowledge of any given heist and demands total submission to his unparalleled skill behind the wheel. Refn delivers on the Driver’s tough talk immediately. We see one such job that necessitates a quick escape, but Gosling’s character isn’t about being the fastest or most furious; he drives smart, and the chase is a marvel of filmmaking that plays like a postmodern jazz riff on Bullitt.

In the first half of Drive, we learn snippets of backstory on the Driver, along with his sycophantic manager (Bryan Cranston, another of today’s best actors), a mobbed-up Jewish man with a pizza-joint front (Ron Perlman) and a psychopathic former movie producer (he made self-described trashy ’80s actioners that were sometimes excused as “European” – one of Refn’s too-clever-by-half winks in the film) played by the officially, certifiably brilliant Albert Brooks.

Because he must, the Driver finds spiritual salvation right next door in the form of a mousey, single-mom neighbor (Carey Mulligan) and her son, whose father has just been released from prison only to be thrown back into a life of crime to pay off his “protection” debts from doing time. As it just so happens, Gosling can help, and a one-last-heist plot engine kicks into gear.

It’s around then that Drive loses its momentum, relying too heavily on Brooks’ stunt casting (“Look, he’s yelling and cutting people!”), Mulligan’s furtive glances and the kid’s mooning to sell the stakes. Part of the joy of movies like this, where a particularly interesting somebody does something particularly interesting very well, is watching them execute their strategies. The nameless Driver is so good that we never doubt his ability to at least escape his increasingly dire situation – who could ever catch him? Instead, Refn inserts the Superman variable, in which innocents he’s sworn to protect tug him into unwise and unsafe circumstances.

One hates to seem superficial, but if this plotting resulted in killer car chases, it would all be worth it. Instead, Refn pulls back from his very conceit, engaging the Driver in all manner of hand-to-hand thuggery – including one harrowing sequence that shatters Mulligan’s illusion of this man as a potential mate – and semi-panicked phone calls. As much as it’s worth the money to watch Gosling absorb his deteriorating well-being, I prefer Superman up in the air, and the Driver behind the wheel.