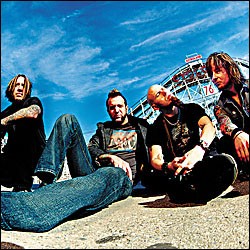 DROWNING POOL Some bands are resilient; Drowning Pool is a goddamned Weeble. Here was a pretty average, up-and-coming radio-metal band, who saw their nascent career derailed when their lead singer died. After an appropriate period of mourning, the band returned with a new lead singer and a follow-up to their decent-selling debut. That new disc, Desensitized, was a complete brick upon its release, and it seemed easy to pin the blame for its failure on fans' unwillingness to "accept" the replacement singer. In reality, Drowning Pool faced the same problem as most radio-metal bands these days: an incredibly fickle (and dwindling) audience. It wasn't that people didn't like Drowning Pool's new singer, it was that people just didn't care. But, rather than packing it in, Drowning Pool hit the road and they've been there since this time last year. They've now got a blistering hit single ("Killin' Me"), Desensitized is slowly working its way out of the lower depths of the SoundScan charts and the band is headlining a show that's likely to sell out. Resilient? Yes. Doggedly determined? Sure. So beset by bad things that it just took a while for the good karma to kick in? Quite possibly. (with Nonpoint, Slunt; 7 p.m. at Hard Rock Live; 407-351-5483; $17.50, $20)

AIDA You dodged a bullet, Orlando; this could have all gone horribly wrong. When we saw Aida pop up on the Orlando Opera's calendar, we thought for a fleeting moment that they'd lost their minds. What on earth were they doing bringing Disney's Elton John/Tim Rice travesty to town? Then we realized the fine folks at Orlando Opera were putting on Aida as an actual opera, which is what it's supposed to be. (Moments like this are the unfortunate side effect of our culture's need to reinvent perfectly good things.) Nonetheless, even Tim Rice can't completely wash away 130 years of operatic good will, and this Verdi piece is one of the most essential operas to experience live, rather than via recording. Musically and lyrically, it's quite good, but not exceptional – the plot is painted in broad emotional strokes and is absent much of the intensity of other Verdi pieces, yet it's still entertaining in a pre-Bollywood sorta way – but what makes Aida essential viewing is the production itself. Verdi was quite particular about which opera halls presented it, as some were ill-equipped to handle the enormous set pieces. Orlando Opera has put a lot of work into this production, and Aida will close out their 2004-2005 season on a visually impressive note. Soprano Marquita Lister has received national acclaim in other cities for her performance in the title role, and we've got faith that the Opera's resident artists (Janette Zilloli, Aaron Pegram) will shine brightly as well. (8 p.m. at Bob Carr Performing Arts Centre; 407-426-1700; $20-$77; repeat performances Sunday and Tuesday, April 24 and 26)

ANGRY SAMOANS OK, we give up. With so many '80s punk/hardcore bands getting back together, we just can't keep up anymore. But we'd like to get this cavalcade of nostalgia over with quickly and painlessly, so let's (forcibly) reunite the following bands and put 'em on a big festival tour: Bad Brains, The Freeze, Battalion of Saints, Minor Threat, Dead Kennedys (with Jello), Suicidal Tendencies (original lineup), Hüsker Dü, Black Flag, Flipper, Government Issue, Gang Green, The Misfits (with Danzig), DOA, GBH, JFA, DRI and all the other bands with initial names. And when this Punkers of Punk Rock tour dips through our city, the local stage will have Damage, Genitorturers (original lineup), Caustic Afterbirth, BP (Belching Penguins, not the gas station), No Fraud, Jehovah's Sickness, Pagan Faith, Radon, Load, and Mother Mary and the Chicken Rondelets. Everyone goes home happy and it's all over in a day or two. Oh yeah, there'll be no slickly produced reunion albums, either. Just give us the old hits, like "My Old Man's a Fatso" and "Lights Out," and then get on with your lives. Hey, maybe start a new band! (with Car Bomb Driver, The Sharp Objects, The Hex Tremors, The Obscene; 9 p.m. at Back Booth; 407-999-2570; $12)

BLOWFLY Blowfly tells dick jokes too. He also tells pussy jokes, fart jokes, fucking jokes, sucking jokes, the whole bit. But when he tells 'em, they're really nasty, really funny and, well, he's not actually telling them so much as singing them. Which doesn't make us feel guilty in the slightest. We love Blowfly. Period. (with One Drop, That 1 Guy; 9 p.m. at Will's Pub; 407-898-5070; $8)

RAJUNCAJUN CRAWFISH FESTIVAL 2005 When a catering company organizes a crawfish festival, you know the Louisiana cooking's going to be the draw and you pray that none of the available vats of gumbo, étouffée and crawfish (which are now in season) are empty before you get there. Adding to that anxiety, Lisa and Rick Boyd of The Crawfish Company of Central Florida (who also feed the hearty appetites of their family of four boys) have put a limit of 500 on the number of tickets they're selling to this return event, featuring zydeco music by The Porchdogs, crawfish-eating contests and other bayou-based festivities. Don't be one of the latecomers left to lick their lips on the wrong side of the fence – get that advance ticket in your pocket now. (4 p.m. at Isle of Pine's South Beach; 407-737-9049; $30, $15 ages 8-12)

MINDLESS SELF INDULGENCE MSI usually opens for incompatible acts, much to its own amusement. With its gangsta-rap swagger, hard-pulsing disco beats, fluttering falsetto vocals and sexually ambiguous stage presence, MSI inspired inarticulate angry outbursts from Korn fans and Insane Clown Posse's Juggalos while touring in support of 2000's incendiary The Frankenstein Girls Will Seem Strangely Sexy. If enduring an MSI set seemed painful for impatient followers of those headlining bands, anticipating a new Mindless Self Indulgence disc has been even more torturous for the group's fans. Named by Alternative Press as one of 2002's most anticipated releases, that follow-up finally arrived, dripping with venom, on April 12 of this year. The group's once-rudimentary riffs have evolved, and synth-pop melodies now cushion its choruses. However, the satirical sting remains. On its stubbornly catchy title track, "You'll Rebel to Anything," it harangues the Hot Topic hordes for their allegiance to corporate co-opted countercultural affectations. The group also calls bullshit on ostentatiously angst-ridden artists. When it plays these songs live, its followers will shake their fists and sing along, many clad in mall-bought T-shirts that depict glamorously pouty gloom dispensers. When there isn't a hostile audience to agonize, receptive-yet-clueless crowds will do just fine. (7 p.m. at Screamers; 407-244-0299; $15)

FRINGE PREVIEW Don't give Fringe organizers any grief over the multiple fund-raising previews they have to pull off in order to make the budget for the 10-day big event, coming May 19-29 to Loch Haven Park. The preview helps to entice the uninitiated into attendance at the theater festival, now in its 14th year. What happens during those 10 days is that short mini-plays by approximately 50 artists or groups are performed at a half-dozen venues. And the key to making the most of it is to plan ahead: What to see, at what time, where? To better make those decisions, on this night there will be a nonstop flow of live commercials, so to speak, promoting as many as 30 different shows, that can be viewed from the comfort of the Lowndes Shakespeare Center. Also on this day, the streamlined pre-purchasing process will be ready for advance ticket sales, sold through a centralized system via the Internet or by phone (see below). The preview is expected to be a sellout affair, but be there early (around 6 p.m. or so) to catch the performers staging a look-at-me-for-free parade through the park before they enter the building. (7 p.m. at Margeson Theater, Lowndes Shakespeare Center; 866-599-9984 or www.orlandofringe.org; $11)