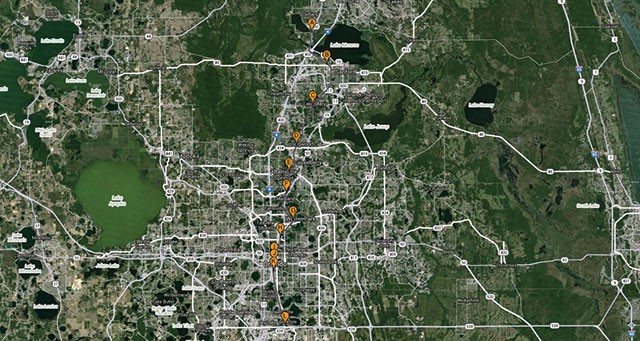 Orlando has historically been a transportation nightmare. Whether it’s the herk-jerk congestion of central artery Colonial Drive (or “Highway” 50, as they say) or the rubbernecked parking lot of I-4 on a good rush hour, our region’s commuter thoroughfares will leave you wondering whether our urban planners were wearing their thinking caps when they put our transportation grids together. Lately, though, some of the frustration has been allayed by creative public transportation solutions coming from both the public and private sectors. With an eye on sustainability, Orlando is (finally) moving by leaps and bounds to make your path from point A to point B a slightly less horrific affair. Hey, you could even lose some weight! Or make a friend! We’re going places. Here’s how you can get there, too.

Bike sharing
Recently, SunCycles Bicycle Sharing Co. (suncycles.org) began its crusade to increase mobility in the City Beautiful, with “hubs” soon to be popping up at small businesses and larger anchors (like Orlando Health and Florida Hospital) throughout the next year. SunCycles has identified approximately 40 locations around downtown Orlando where they plan to place bike corrals. There’s a mobile app from which you can reserve a bike – three-speed, no chain! – and the cost is pretty reasonable: 24-hour access for just $5 or an annual membership for $99 (plus additional fees for trip times).

Car sharing
Just as the bike-sharing program was launched, the city also announced its partnership with rental giant Hertz via that company’s 24/7 car-sharing program, which has brought 12 cars to various places around downtown that can be rented by the hour. Unlike other car-share programs, Hertz’s does not require an annual fee, though the cost per hour can vary sharply from $8 to $19. You can access the cars by downloading the Hertz 24/7 app or calling 1-866-610-RIDE. All insurance and other pesky costs are included in the initial fee.

Free LYMMO buses
Even though there’s no subway or comprehensive train situation (more on that later, SunRail), the city and county have done some rethinking on the state of their flagging public transport buses. Two free bus lines – one in Parramore (or West Orlando) and one through Thornton Park – are currently under development, both of which will join the free downtown perimeter of the existing LYMMO system in the coming years. The benefit of the LYMMO system is mostly that it doesn’t cost anything, but there’s also the fact that it has its own dedicated lanes so it can actually be considered “rapid transit.” The regular LYNX paid routes still provide a great value in getting around (find rates at golynx.com/fares-passes). In the near future – following a somewhat contentious study – a route designed to connect some of the city’s more congested areas along Colonial Drive (but excluding some of the most busy parts) will be developed.

SunRail
Central Florida’s new rail solution connecting commuters from Volusia County all the way down to Osceola County – with Orange County/Orlando serving as the central prize – will launch its first phase in May (you may have already seen the “soft opening” phase occupying your railroad crossings this winter), while a second phase completing the journey down through Osceola follows in 2016. Each station will have a vending machine dispensing tickets, which will range anywhere from $7.50 for a round-trip ticket from DeBary to Orlando to a one-year plan for the whole journey at around $1,120 on a reloadable SunCard. Ostensibly, you’ll do a car-share or bike-share or a bus route upon arrival at a station.