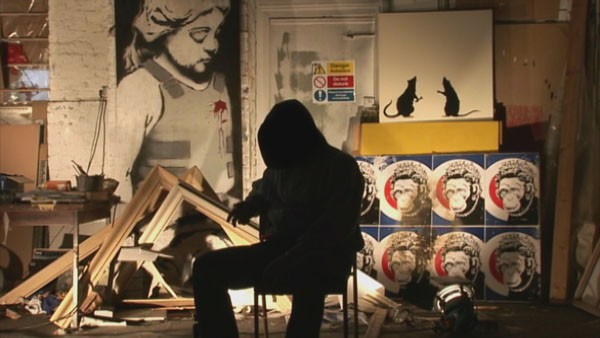 Unfairly maligned – but only slightly – at the time of release (most likely due to its origin as an M. Night Shyamalan idea – the guy is just toxic these days), Devil is nevertheless good B-movie entertainment. Its slight running time and confined environment do no injustice to the film’s tantalizing premise: Five random people are stuck on a high-rise elevator and terrorized by what may be Satan. Of course, Shyamalan rears his ugly head here and there, particularly in the film’s vaguely Christian parable, but director John Erick Dowdle (2008’s Quarantine) and especially legendary cinematographer Tak Fujimoto, whose work has seemed hamstrung lately by his involvement with Shyamalan, go to town on the creepiness. (available Dec. 21)

Exit Through the Gift Shop

Also known as “the Banksy doc,” Gift Shop begins with a breathless first half in which merry Frenchman Thierry Guetta lucks into a role as the street art movement’s de facto documentarian. Guetta’s camera follows artists like Banksy and Shepherd Fairey as they invent and eventually commercialize an entirely new way of graffiti expression. During the fascinating second half, Banksy turns the camera right back on Guetta, who turns his association with the movement into a sort of career in derivation, eliciting hisses from his former subjects along the way. It raises provocative questions about the meaning and purpose of art but still manages to remain completely engrossing and bizarrely uplifting.  (available now)

Joan Rivers: A Piece of Work

This documentary about the life and trials of trailblazing comedienne Joan Rivers is nothing if not a platform for Rivers to marvel at and find humor within the indignities she’s suffered throughout her career. From Jack Lemmon walking out on her act in disgust, through Johnny Carson’s disownment of her after she dared accept her own competing talk show, to today, where she finds herself increasingly sans demand, Rivers foregoes what may be her natural instinct toward reality show-like cartoonishness, instead opting to be nakedly honest and affectingly vulnerable as she tries out a one-woman play she wrote and performed herself. Through it all, the legend reveals herself as a survivor above all else. (Yet another insult befell Rivers last month when the film was left off the shortlist for this year’s Best Documentary Oscar. Gift Shop made the cut.) (available now)