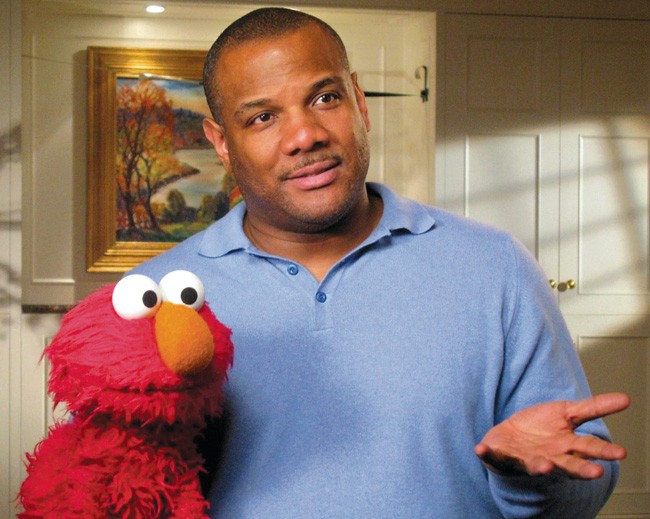 A Puppeteer's Journey I'll admit it: I'm in the tank for Elmo. A beloved figure not just in the Strout household but with families of every kind all over the world, the furry red monster from Sesame Street has staked a claim to hearts of all ages in the last decade or so, and Being Elmo, director Constance Marks' loving tribute to the purity of soul within Kevin Clash, the 51-year-old African-American puppeteer who did nothing less than inherit Jim Henson's crowd, pays tribute to the power of Elmo. Utilizing jaw-dropping early footage of Clash learning his trade as a teen wunderkind (tapes that took years to find and secure rights to), Being Elmo explores how he went from fashioning his own Muppets out of his father's coat to a worldwide phenomenon of love. Although deleted scenes are sadly not a part of this initial release, check out the interviews, which integrate certain cutting-room-floor scenes with commentary and context, including Clash's visit to a Kansas town devastated by a tornado, his meeting with a woman whose young daughter was buried with her Elmo (the film is loaded with these kinds of overwhelmingly sad meetings) and a young black boy whom Clash calls (on camera) “the future of Sesame Street.”

This affectionate tribute to a genuine cinematic legend may not overflow with new information to those who've been to film school (either on campus or in their living rooms), but director Alex Stapleton knows exactly which pressure points to hit, from the amusing paradox of Corman's Zen-like demeanor and clips from his filmography that practically invented schlock horror, to eye-opening interviews with Jack Nicholson (who totally cries), Ron Howard, Martin Scorsese, William Shatner, Quentin Tarantino and practically the rest of Hollywood, all of whom, in one way or another, are proud graduates of the Roger Corman Film School. Although the doc could have benefited from a tougher, more punk tone that might match the archival footage better than the score by Air (yes, Air) and the soft-focus flourishes, there's no way a collection of tributaries this wide and deep isn't gonna be a blast.

Italian documentarians Tizza Covi and Rainer Frimmel step into the treacherous pseudo-realist territory of the Dardennes with this lovely, heartbreaking tale of a circus family that takes in an abandoned 2-year-old, first out of social obligation then, naturally, out of genuine, if begrudging, affection. Flame-haired Patti (Patrizia Gerardi) has enough on her plate, between an adolescent son navigating his relationship with his first girlfriend and fights at school, a knife-throwing husband (it's part of the act) who worries about the financial burden this adorable girl brings upon them – even as he slides into a photo booth and makes funny faces with her – and the ever-present potential that this whole situation will explode. But Patti's a nurturer to the bone and a fascinating one, at that. While the film at times seems adrift at sea and absent much conflict, Patti and her husband's disparate parental styles are endlessly watchable.