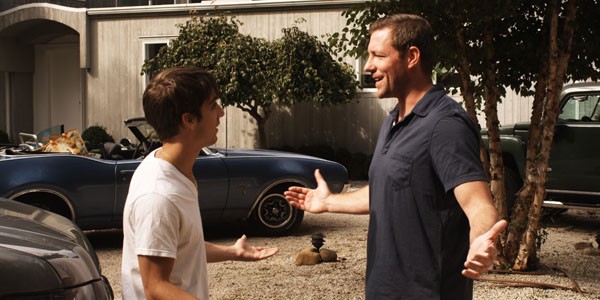 What do an alcoholic taxi driver, a damaged, over-the-hill stripper and a pot-dealing pervert have in common? Nothing, besides living in Alaska, which thanks to a certain Republican goof, we know is more a state of mind than an actual state. The film follows the troubled-but-charismatic chauffeur as he quits his job, loses his girlfriend and tries to kill himself – all of which happen without a hint of melodrama or false grandeur – then struggles to find his footing (or at least the slightest human connection) in a dead-end town. Director Tom Hines and outstanding rising star J.R. Bourne manage to hold your attention throughout languorous scenes of barroom therapy and the most casual conversation, revealing more through the gaps and pauses than through first-time writer Michael Kamsky’s natural, regional dialogue. (available now)

Not to take anything away from their singular voice, but when the Duplass brothers merged mumblecore with mainstream with Cyrus this year, they simply did what Edward Burns has been quietly doing for 15 years. While Burns may never reach the heights of Woody Allen or Cameron Crowe that he clearly aspires to, his small, smart, often boundlessly romantic films are rom-com treasures in a sea of Leap Years. Nice Guy Johnny, the story of a wannabe talk-show host (Adventureland’s Matt Bush) who’s engaged to a control freak trying to get him to settle and give up his dream, is the best work Burns has done as an auteur since She’s the One. At times predictable and labored, Burns nevertheless infuses wit and gleeful romanticism into every frame. (available now)

Who is Harry Nilsson (And Why is Everybody Talkin’ About Him)?

More an extended EPK than anything else,  filmmaker John Scheinfeld’s slobbering ode to the troubled crooner who wrote and sang hits like “Everybody’s Talkin’” and “One” is admittedly bursting with credible praise from Brian Wilson, Terry Gilliam, Randy Newman and even John Lennon, all lined up to proclaim Nilsson’s greatness. The film cuts between these talking-head giants and Ken Burnsian archival footage in the hopes of assembling an answer to the title’s question: Why has Nilsson’s legacy not caught on like those of his admiring peers’? Ultimately, the film’s participants are too kind to offer what the narrative seems to confirm: Nilsson overplayed his Lennon hand, ingraining himself in people’s minds as a master musician’s bitch-boy more than an artist in his own right. But OK, we’ll go with “before his time” or whatnot. (available now)