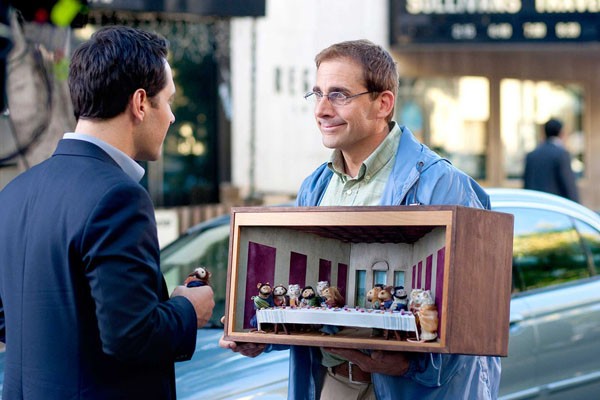 Yes, parts of this documentary were “restaged,” which caused too many overzealous critics to disregard its merits completely. And yes, a post-release 20/20 special on the film was essentially a condensed version of the whole enterprise, which kind of took the wind of its sails. But Catfish, about a trio of self-involved New York creatives who fall for the charms (and flattery) of a small-town family via Facebook, has at its heart a powerfully touching message of understanding and more than a little triumph of comeuppance. Don’t listen to the echo chamber: This is a valid, successful piece of storytelling no matter the means. (available now)

In this remake of the 1998 French farce The Dinner Game, corporate up-and-comer Paul Rudd hauls amateur taxidermist Steve Carell to a special-invite dinner in which the masters of the universe host freaks and geeks for their own amusement. Audiences seemed to lock in to the discomfort level more than the film’s surprising tenderness and Meet the Fockers director Jay Roach’s astounding maneuvers to keep it out of schlock territory, but I hope more people can appreciate Schmucks’ subtle charms at home. Or at the very least reward Roach for resisting those Focker-sequel paydays in favor of classier fare like this and 2008’s Recount. (available now)

Criminally under-appreciated in its theatrical run – though mega-successful considering its tiny budget – Exorcism was done a terrible disservice by Lionsgate’s marketing team, who flat-out created images that aren’t in the movie to go on posters to make it seem like a head-spinning horror film. It was a horror film, in fact, but in a more religio-political sense. The excellent Patrick Fabian plays a Marjoe-esque evangelist who has changed his mind about performing fake exorcisms for rural hicks for money after reading about several children dying at the hands of people like him getting too, um, enthusiastic. To put a nail in his own coffin, he invites a camera crew to one such “exorcism” and discovers a backwoods tragedy on par with Jesus Camp. Aside from a silly bailout ending, the rest is pseudo-doc brilliance. (available now)