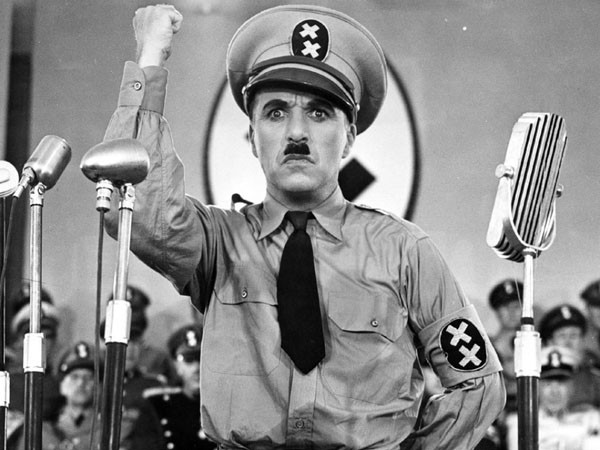 Have you ever noticed how much Adolf Hitler looked like Charlie Chaplin? Chaplin did, too, and he noticed much more than that at the time he made this comedic, tender, frightening and prophetic indictment of the dictator. Playing a Jewish barber mistaken for "Tomanian" ruler "Adenoid Hynkel," Chaplin mostly ditches the Tramp's romanticism and takes his place as a shaper of world culture at a time he was needed the most. (The Great Dictator began filming more than two years before the U.S. declared war on Germany.) Through the barber's story, we learn of Jewish ghettos, concentration camps and the suppression of basic freedoms, while the "real" Hynkel plans world domination while dancing with a global balloon and getting into a food fight with his dictator ally, "Benzino Napaloni." The metaphor - war is really fought by the people on the ground while the masters of war are comically inept - is elegant and just as touching as any of the Tramp's adventures. When Chaplin speaks in place of Hitler in the grandiose finale, he speaks of freedom through science and kindness. It's an endlessly fascinating masterpiece, and one that's given endlessly fascinating analysis on this lovely Criterion edition, which includes an eye-opening documentary with interviews from Ray Bradbury, Sidney Lumet and countless other geniuses in praise of this all-time great. (available May 24)

I understand why a pre-Oscar Natalie Portman would be interested in this film adaptation of author Ayelet Waldman's 2006 novel, Love and Other Impossible Pursuits: Waldman's voice is both touching and barbed, and the story of a second wife struggling to get along with her stepson after the death of her and her new husband's days-old baby of SIDS has "tear-jerker" written all over it. But under the direction of screenwriter-director Don Roos, whose catty, female-oriented films (The Opposite of Sex, Single White Female) seemed so fresh in the 1990s and so tone-deaf in the last decade (Bounce, Happy Endings), The Other Woman seems adrift. Portman's characterization of Emilia Greenleaf, an attorney who treats anyone near her with contempt, even, one assumes, if she wasn't grieving, is insufferable, as is Roos' proclaimed muse turned mistreated utility player Lisa Kudrow as the shrill (naturally) ex-wife. Still, for all its inconsistency, there's enough talent onscreen to bring it around to something worthy of a rainy Sunday afternoon. (available now)