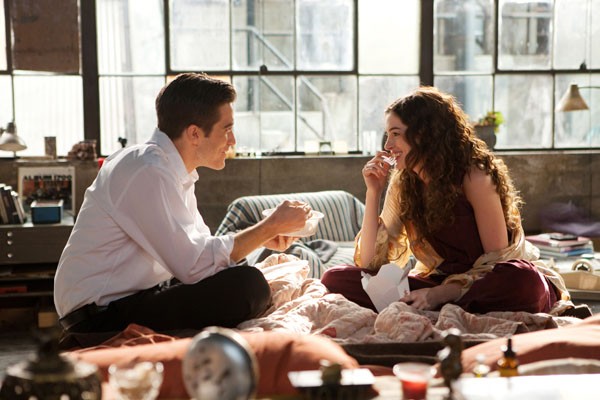 The stars of this nearly beat-for-beat variation on Jerry Maguire deliver just the old-fashioned Hollywood power writer-director Edward Zwick is reaching for. Jake Gyllenhaal absolutely owns the screen as an on-the-rise pharmaceutical salesman, while Anne Hathaway ascends to Julia Roberts status as the early-stage Parkinson's sufferer he loves. Although the movie flirts with Terms of Endearment melodrama and Zwick's grab for topicality leads to some dead ends, the movie is still a refreshing throwback to a time when adults could do adult things onscreen and not act like overgrown  prepubescents. (available March 1)

It's fun to root for the bad guys sometimes, that's true, but rarely has it ever felt so wrong and so thrilling as it does in this biopic of French (and sometimes Canadian) criminal Jacques Mesrine. Telling his life story in two parts (the second will be released in the U.S. down the line), director Jean-Francois Richet doesn't waste a frame, zipping Vincent Cassel's Mesrine in and out of adventures, prison breakouts, prison break-ins, bank robberies, lovers and everything in between as if the film itself were on the lam. Equal parts Antoine Doinel, Charlie Chaplin and Michel Poiccard, Mesrine's personhood is transparently shallow and bitter, but who can argue with the rock-star life on the surface? Those who only know Cassel (otherwise known as Monica Bellucci's husband to the rest of us shallow and bitter folk) from his misplaced camp in Black Swan would do well to soak him in here in his element. (Hint: Don't get so curious that you pick up his and his wife's work in Irreversible. As the title suggests, you can't go back once you've been there. Shudder.) (available now)

Shortly before Banksy's Exit Through the Gift Shop stormed art houses with its muddy art vs. commerce premise, director Julie Checkoway's Waiting for Hockney was asking the same questions of its subject, obsessed artist Billy Pappas, who spent more than eight years drawing one face: Marilyn Monroe. Even during filming, Checkoway wrestled with the topic, asking in a New York Times piece from 2005: "It's an amazing thing, but is it art? The film is about that, but more than anything, who cares? Is it beautiful? Is it affecting? Is it worth talking about? I can't answer those questions; it's up to me to raise them in the film." She does, but the documentary strains at them in a way that Banksy's similar exercise danced around them. What the film does boast is a fabulously unhinged and unreliable subject, and one piece of work that not only holds up to the magnifying glass, but requires it. (available now)