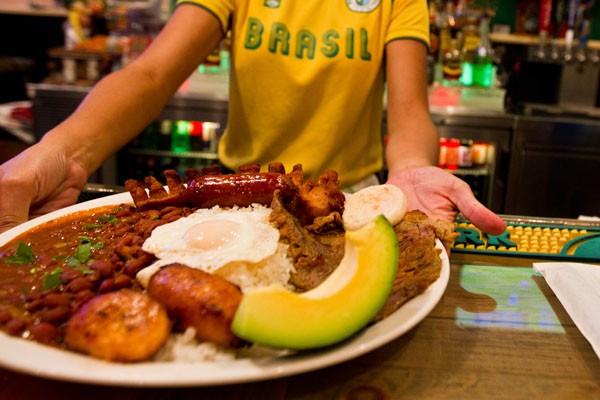 Sand Lake Road is a thoroughfare of polar opposites – on the west end of the strip, posh restaurants attract well-heeled gastronomes; to the east, near and around Orange Blossom Trail, smaller mom-and-pop joints draw a diverse patronage of chowhounds seeking an alternative to Dr. Phillips’ sophisticated offerings. One such joint – a spacious cantina by the name of La Hacienda – eschews notions of fancy Nuevo Latino fare in favor of rustic Colombian staples. Morcilla? Check. Lengua? You betcha. Soncocho de cola? Without question. But with the blood pudding, tongue and oxtail comes a hefty festooning of Colombian kitsch – an explosion of blues and yellows, decorative trinkets and Carlos Valderrama pictures. A hand mirror and a rolled-up Benjamin might’ve completed the decor, but servers decked out in colorful futbol gear jolted our reuptake inhibitors just as efficiently.

We also got a kick out of the bus-shaped menu, and, feeling bold, steered to the sections listing the aforementioned meats. In addition to giving a pleasant snap, piercing the blood pudding sausage ($3.25) revealed a filling of rice and seasonings at once spicy and smoky. The white corn arepa, with its cardboardy texture, was an entirely unnecessary side. Grilled beef tongue ($11.25) was simply done, its flavor unadulterated. That didn’t cater to my palate, but one of my dining comrades couldn’t get enough of it. I thought it better when accompanied with the wonderfully prepared red beans. If there was one dish that was universally loved, it was the big bowl of oxtail soup ($8.95): Large chunks of pliant, fatty meat lolling in a broth enriched with potatoes, yuca and green plantains led to a clinking battle of jostling spoons, and to the winner went the lone piece of corn on the cob.

Of course, not everything on the menu comprised lesser-known cuts of meat, or Colombian delicacies for that matter. There’s a section devoted to Mexican food, ostensibly for diners with more cautious palates, but we also had the pleasure of sampling some of the more traditional Colombian items, like baked empanadas ($1). Smaller than the Venezuelan and Peruvian versions we’ve sampled around town, these cornmeal-crusted meat pockets (beef or chicken) begged for a spatter of the house-made hot sauce. Off the list of seafood entries, the viudo de pescado ($20) wasn’t the fish soup we were expecting, but rather a magnificently prepared, somewhat deconstructed version of it. A bowl of fragrant fish broth and a plate of baked red snapper presented whole over a banana leaf were served separately. We deduced from our genial, non-English-speaking server that pouring the broth over the Creole-sauced fish was the idea, but it was somewhat impractical given the shallow dish. Forking off bites of the tender flesh and dipping them in the broth made the most sense, and we were just as happy with it.

Be careful not to fill up on aborrajados ($3.50) – the heap of fried plantains filled with gooey white cheese is delicious, and could even be enjoyed as a dessert. Had we known how mediocre the dense square of vanilla flan ($3.50) or the farmer figs with cheese and sugar cane ($3.50) were going to be, we probably would’ve plantained up.

You can’t knock the menu, though. La Hacienda’s meals, like many to be had in this multicultural sector of the city, are simple, straightforward and legit. Leave the trendy creations to the dining rooms in Dr. Phillips – here on the east side, La Hacienda represents.