Glass babies, bean pots, lenticular panels and beer labels are not business as usual in fine art, but we do not live in ordinary times.

It's their first ever visit to Florida (though their work appeared in the Orlando Museum of Art's massive Contemporary Glass Sculpture exhibition in 2013), and they throw babies, beans, beer and more into a contemporary mix of Mexican-American-global sensibilities.

The show's name, Rococolab, references Mexico's shaggy, over-ornamented colonial architecture that seems, as late as the 20th century, to be stuck in a rococo time warp. "It also means roco-colab," Einar explained to us during a tour.

Collaboration is the keyword between the two brothers, whose sense of humor comes through in their blown- and carved-glass, molded-resin, computer-manipulated, found-object-rich sculptures bursting with glossy color, double and triple meanings, and kitsch turned upside down and backwards.

"Tanque You" is an exquisite green-and-orange glass army tank, as pretty as candy even as it aims the barrel right at you. "Bean Pot" and "Organ Exchange" are pretty too, but even weirder.

"When a family member needed a kidney," explains Jamex, "we looked into it and realized pretty quickly that we're worth a lot more money parted out, organ by organ, than we are as a whole human being." Glass hearts, kidneys, intestines and various other body parts adorn the bean pot – referencing the pun "human bean (being)" and a few other Mexican slang terms as well.


Lenticular art is rooted in kitschy portraits, where the eyes follow you or the painting changes depending on the viewer's angle. The De La Torre brothers discovered a digital process whereby the lenticular glass can harbor three or more images, not just the usual two, so the effect is a moving picture. In "La Reconquista," watch pop singer Ricky Martin transform, while Satan's smile graces several TV stars in a hilarious, but exquisitely beautiful, send-up of "The Last Judgement" by 15th-century Flemish artist Hans Memling.

"We collaborate with dead artists, too, because they can't stop us!" says Jamex. 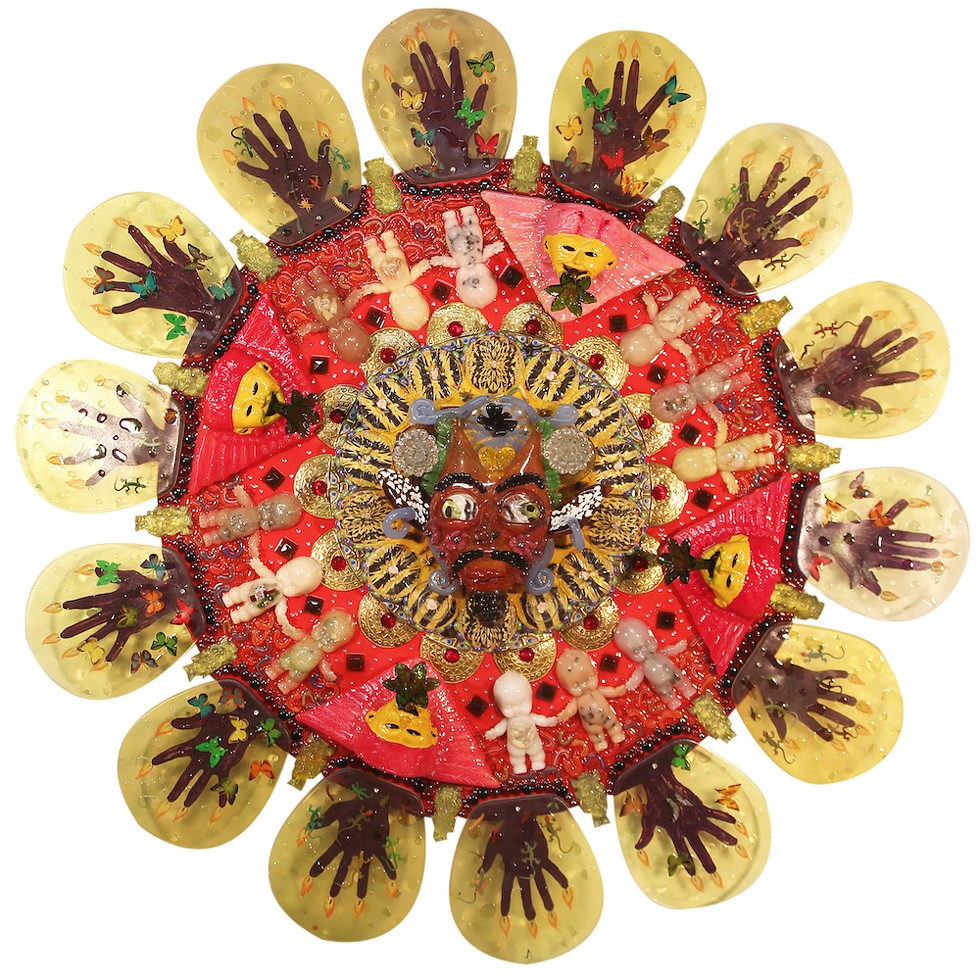 Chaos and humor are knitted together this exhibit. Even the most somber, "Working Mother" – a lenticular and glass extravaganza – treats the special stresses and social position of women today with remarkable care and insight, and yet the stoic goddess figure cocks an eyebrow at the viewer.

The De La Torre brothers throw a lot at you. Each work is multiplexed with color, materials, images, cultural references and jokes. In the small CFAM front gallery there is a joyous, maximalist overflow of art and ideas cheerfully captivating the viewer and yet stimulating serious thought. If less is a bore, then more is better and the most is the best. So how do they know when a work is finished? The brothers think for a minute. "When it's full," declares Jamex. Time to fill up.