There are neighborhoods in this city where food-minded locals should go out of their way to visit, but College Park isn't one of them. And that's sad. And infuriating. Because this quaintest of downtown neighborhoods, so chock-full of restaurants both casual, fine-ish and in between, deserves better.

When K Restaurant changed ownership, then permanently closed early this year, it marked the end of an era of destination dining along Edgewater Drive. Is there really a motivating rationale for non-College Parkers to head to College Park to eat? Adriatico? Christo's? Jade? RusTeak? All decent, but none are compelling enough to visit if you live in, say, Oviedo, Maitland or SoDo. The Tap Room at Dubsdread for a burger? Hell, good burgers are a dime a dozen in every neighborhood in this city. Digress Wine and Bagel Bruno are certainly worthy stops, but neither qualify as restaurants per se. For the sheer number of eating establishments along a one-mile strip of Edgewater Drive, you'd think there'd be a few that would qualify as destination-level, à la Park Avenue in Winter Park. But no.

Fact is, the restaurant scene in College Park is fickle and, well, a little strange. (I know; I lived there for five years.) Restaurateurs have long complained about the neighborhood's staid character: It's a bedroom community; families don't want anything out of the ordinary; College Parkers don't like to eat out on weekdays; no one outside of the neighborhood visits College Park; parking sucks; there's no foot traffic, etc., etc. So for El Vic's Kitchen to offer "modern global cuisine" (with a noticeably Indian bent) amid this backdrop is both ballsy and, perhaps, shortsighted. I admire El Vic's owner Sheetal Thakur for A) wanting to play College Park's restaurant game and B) not opening a taco or Italian joint in the old Tartine space.

But a lot of the global eats we sampled fell into the "utterly unremarkable" category: a curd-less poutine ($6.95) with limp, reheated fries sitting in a pool of gravy inexplicably slathered with, uhh, tomato sauce; Sichuan paneer ($9.95) that spent way too much time in the wok; and an unrefined watermelon feta salad ($7.95) that looked like it was put together by a 5-year-old. An appetizer sampler ($15.95) fared better, with plump semolina-battered shrimp and filling samosas besting chicken tikka that wasn't tikka in the least and soggy fried squares of fish koliwada. I've had frozen fish sticks that tasted better. 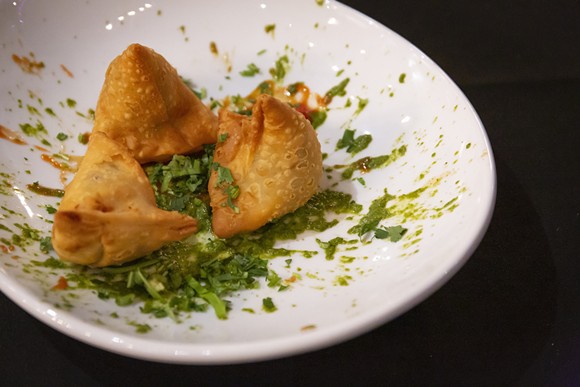 Care, however, was put into plating the coconut-lime salmon curry ($21.95), a blazing entrée served over a puck of basil rice. We appreciated the grown-up looks and Thai flavoring, though using a fish from Florida waters would've been preferable. For conventional palates, a butter chicken risotto ($15.95) couldn't have been, well, more conventional. What we enjoyed most, perhaps, were the soups – an ear-tingling Asian coconut chili soup ($6.95) with carrots and broccoli, and a tomato-shrimp bisque ($7.95). Small quibble: The tails should've been removed from the shrimp to make slurping easier.

Phyllo-dough samosas filled with Belgian chocolate ($7.50) made a stellar ending, which confirmed our collective opinion: that El Vic's (named for Thakur's daughters Elizabeth and Victoria) should tighten things up in the kitchen, focus the menu by doing away with all this global nonsense and be what it so obviously is – an Indian restaurant. It doesn't need to serve Benares or Junoon-level fare, just Mughlai classics at acceptable standards. I think College Park would welcome that. Might even draw some folks from outside the neighborhood. And if that fails, well, "El Vic's" sounds like it'd serve great tacos.

– This story appears in the Feb. 19, 2020, print issue of Orlando Weekly. Find out the latest dining news every Friday morning with our weekly Food + Drink newsletter.