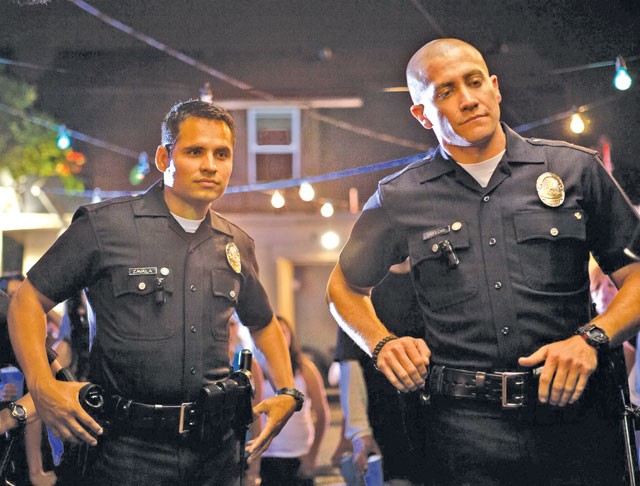 During the past decade, David Ayer has carved out quite the niche for himself as a herald for the corruption that infiltrates the ranks of the Los Angeles Police Department. Whether it's a silly blockbuster like S.W.A.T. or a straight-faced drama like Training Day, Ayer's had a hand in it, occasionally working within noir norms (Street Kings) and at times operating under the shadow of legendary crime novelist James Ellroy (Dark Blue).

But every once in a while, Ayer finds himself in the director's chair: previously with 2005's Harsh Times and now with End of Watch, in which he thankfully changes it up, swapping out police corruption for camaraderie. It's a love letter to the LAPD, no doubt about it, but as led by co-stars Jake Gyllenhaal and Michael Peña, Watch is winning enough to forgive some of its more egregious clichés and exciting enough to ease up on its questionable found-footage logic.

From time to time, End of Watch becomes another one of those unlikely documents, as officer/pre-law student Brian Taylor (Gyllenhaal) needs an arts elective and decides to record his daily patrol with partner Mike Zavala (Peña) for the sake of making a documentary. Fortunately for him (and us), the pair tends to run up against the kind of South Central gangs that film their own drive-by shootings for the sake of proving their worth.

It's a stretch, and Ayer doesn't win points for trying to match the jittery handheld aesthetic with his more conventional narrative angles, but in the moment, when Taylor and Zavala start knocking on doors and busting perps, the point of view lends a visceral immediacy that rivals the tension of a horror movie and replicates the look of a first-person shooter. Startling moments of violence upon their arrival on the scene certainly pack a punch, and seeing characters respond to a house fire onscreen has rarely felt so immensely claustrophobic.

In between calls, Gyllenhaal and Peña exchange convincingly amusing banter when not discussing their love lives. (Zavala's married, while Taylor's finally fallen for a brainy girl, played nicely by Anna Kendrick, instead of the usual "badge bunny.") They run afoul of fellow cops (David Harbour) and drug cartels alike, and when these two finally find themselves in the shit, it's only because they've knowingly pursued the three critical "food groups" of crime – dope, money and guns – beyond their jurisdiction.

As scripted, Ayer's dialogue is littered with natural touches, even if his narrative can't help but feel a bit episodic, but at least he's wise enough to spread such mayhem over the course of a year or so, making repercussions seem overdue once they do hit. An early throwdown with a perp suggests a notion of "street justice" that hardly sees a payoff, and the footage itself isn't as vital to the plot as one might expect.

It's all just a framework for the limits and cost of doing the right thing, though; for the most part, End of Watch is an effective spin on the buddy-cop routine. Who knew that, after 10 years on the beat, Ayer could still find new shades of blue.