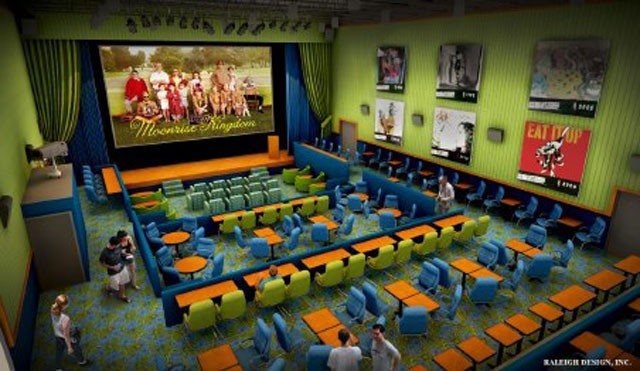 Great film whisks viewers away to a fleeting, fantastic place. So, too, does the Enzian Theater, the only art-house movie theater in the Orlando area.

Towering trees draped in moss shield the Enzian and its guests from the rumble of cars passing nearby, if only for a few hours or a couple drinks. It's a welcoming, yet secluded alcove. And that's by design.

"When we get to film festivals and we're inviting a lot of people from out of town who have never been to Enzian before, we are extraordinarily confident, saying, 'You're coming into a very welcoming environment, and you're going to love the audience we're bringing for your movie,'" says Elizabeth Tiedtke, the Enzian's executive vice president. "We want anybody who walks onto Enzian property or in the theater to feel like they're walking into a good friend's living room."

But just like that well-loved and worn living room, even the most welcoming and inviting of spaces needs updating. Since the Tiedtke family opened the theater in 1985, there have been a few renovations, but ever since the addition of the outdoor Eden Bar in 2007, not much has changed. A walk through the theater shows its age: Wooden four-top tables and upholstered wooden seats that date back to the Enzian's opening night populate the theater's Darden section. Armrests are chipped, felt cushions are frayed. It's a warm but haggard space that captures the precarious balance between cozy and ramshackle.

As a result the theater has launched its first significant overhaul since the Eden Bar addition, and they're calling it the Enzian makeover. The project is focused on refreshing a space where not much has changed since it screened its very first movie.

"I hate to tell you this," Tiedtke says, "but some of the original tables and chairs are still there."

The upscaling of blockbuster megaplexes run by chain theater groups like Regal Cinemas and AMC Theatres further exposes Enzian's dated feel. The theater at Universal CityWalk has high-backed, stadium-seating rocking chairs and a full liquor bar. The movie house at Downtown Disney has MacGuffins' Bar & Lounge in the theater lobby, as well as "Cinema Suites": premium viewing rooms with leather easy chairs, dining trays and push-button cocktail service. Although these amenities probably won't lure the Enzian faithful away (Enzian's focus on cult classics, indie films and edgier fare will always make them an authority with their audience), the Enzian can feel a little threadbare by comparison.

Last year, theater management used some profits, as well as gifts from Enzian patrons, to begin updating the space. A revamped floor layout makes up much of the makeover: Square two-tops are replacing the current round ones, so tables can be separated or combined with ease, and provide more elbow room for guests; new, tiered seating areas with elevated, two-person banquettes and high-tops overlooking sections B and C will create more modern seating spaces; two raised booths will sit at the back of the Darden section.

Tiedtke hopes the updates provide an unobstructed view for patrons anywhere in the theater without sacrificing Enzian's homespun charm. The new Enzian will also feature re-carpeted floors, forest-green walls and proscenium curtains. The makeover is scheduled for completion in March, just before the 2013 Florida Film Festival.

Renovations have been underway for more than a month, but those fearing they could tamper with scheduling or programming needn't worry: Tiedtke says Enzian's foundation of film festivals, outdoor movie events and independent pictures will not change. After all, it's not the tables, chairs and carpeting that make the Enzian different, it's the philosophy behind the theater that makes it what it is.

"Our relationship with our patrons and our audiences is extraordinarily good, and it's something that we treasure," Tiedtke says. "We are a community-based, community-serving organization. … We could not do what we do without community support and the loyalty of our patrons and supporters. It's the difference between being here and not being here."

If you would like to donate to the Enzian's renovations, visit enzian.org.