Even if Trump loses in November, Bill Barr will torch the Constitution on the way out 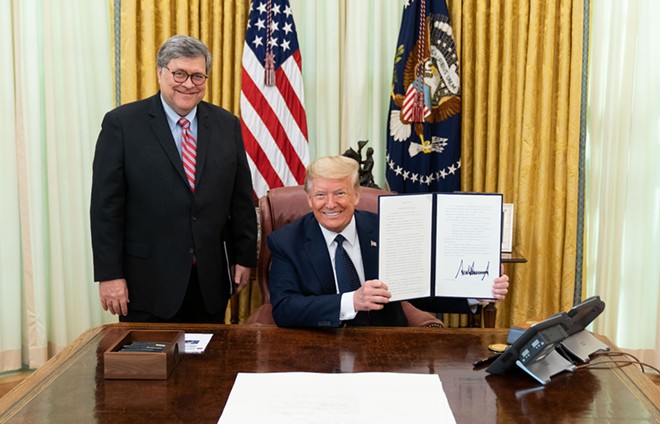 Maggie Haberman tweeted something the other day that I found remarkable. Promoting a story on President Trump’s about voting by mail, the New York Times White House correspondent wrote that Trump was “accelerating his attacks on the integrity of the elections” because he was “unable to stop [Joe] Biden’s rise or modulate his own behavior.”

NEW - unable to halt Biden’s rise or to modulate his own behavior, Trump is accelerating his attacks on the integrity of the elections. @NYTnickc @YLindaQiu and me https://t.co/iPMFRlmhid

Even facing humiliation in November, the president can’t control himself or stop tilting at conspiratorial windmills. He’s a cokehead on a bender, in other words, or a toddler who needs a nap – only he has the federal government at his disposal and no compunction about using it to his own ends.

So we can agree, then, that Donald Trump is the most dangerous man in America (and if you believe his niece, the world). But barring a dramatic reversal, he’ll leave office in six months with few meaningful victories beyond the ideologues he’s appointed to the bench.

In the long run, the second most dangerous man in America might leave a more damaging legacy.

Since his appointment last year, Attorney General William Barr has enabled and encouraged Trump’s autocratic fetishes, laying the groundwork for a vast expansion of executive power that answers to neither court nor Congress, aided by a Department of Justice that has forsaken any shred of independence, to brazenly function as a White House consigliere.

From the outset, Barr made clear that he believed the president could do as he pleased – and that he viewed himself foremost as Trump’s, not the nation’s, legal advocate.

Barr’s wildly misleading four-page summary of the Mueller report allowed the president to claim vindication – until the full report later showed that Trump had almost certainly obstructed justice and would have been indicted were he not the president. Barr has still not released the internal memo on which he based his conclusion that Trump did not break the law, though, according to an unsolicited memo he sent the DOJ and Trump’s lawyers in 2018 – which might have played a role in his nomination a few months later – he didn’t believe interfering in the investigation was a crime in any event.

After that, he set out to undermine the Mueller investigation piece by piece. He assigned a U.S. attorney to investigate the origins of the Russia investigation, and another to re-evaluate the investigation into former national security adviser Michael Flynn, who had pleaded guilty to lying to the FBI. The DOJ dropped charges against Flynn. It also reduced its sentencing recommendation for Trump pal Roger Stone, who lied to Congress; four career prosecutors withdrew from the case in protest.

Over the last few weeks, the full range of Barr’s subservience has come into focus. Amid the George Floyd demonstrations, for instance, Barr personally ordered law enforcement to attack peaceful protesters in Lafayette Square to make way for Trump’s photo-op in front of a church. Then, following Trump’s lead, Barr baselessly fearmongered about voting by mail – though, also like Trump, he himself has voted by mail. On June 24, a federal prosecutor testified that Barr ordered prosecutors to reduce the government’s sentencing recommendation in Stone’s case after Trump tweeted his disapproval. Another DOJ prosecutor testified that Barr forced the anti-trust division to investigate mergers in the cannabis industry because he hates weed and to investigate California automobile makers that committed to Obama-era emissions standards following – wait for it – a Trump tweet.

And we’ve not yet touched the Friday Night/Saturday Afternoon Massacre – Barr’s bungled effort to remove Geoffrey Berman, the U.S. attorney for the Southern District of New York, the office that prosecuted former Trump attorney Michael Cohen and is now investigating cases involving the president, the Trump Organization, and current Trump attorney Rudy Giuliani.

On June 19, Barr announced that Berman had resigned and would be replaced by an administration buddy. But Berman said he had not resigned. And because he’d been appointed by judges, only Trump could fire him. So the next day, Barr announced that Trump had fired Berman, though Trump seemed to deny it. But Berman stepped down anyway; having been fired, his deputy, not Trump’s lackey, would take over the office and its pending investigations until the Senate approved a replacement.

Barr gave himself a headache for nothing. The question, yet unanswered, is why he so urgently wanted Berman out of the way – whether, perhaps, he might want to stall an investigation through November. Barr says Trump merely wanted to install his own man – Securities and Exchange Committee chairman Jay Clayton, who has no prosecutorial experience – in that post, and he dismisses concerns about his motives as “conspiracy theories.”

Feel free to roll your eyes.

As Donald Ayer, a deputy attorney general during the George H.W. Bush administration, told the judiciary committee last Wednesday, “I was privileged to serve in the Department of Justice under two Republican and one Democratic president, and I am here because I believe that William Barr poses the greatest threat in my lifetime to our rule of law and to public trust in it. That’s because he does not believe in its core principle: that no person is above the law.”

House Democrats have shown little appetite for impeaching Barr, which is their only recourse. Senate Republicans, of course, would acquit him, and besides, with Biden up by landslide margins, they’re not eager to do anything that might alter the course of the election.

On a pragmatic level, that’s understandable. But the more Barr’s vision of an unaccountable, quasi-monarchical unitary executive becomes entrenched – the longer it exists without a sustained pushback – the harder it’s going to be to get the toothpaste back in the tube.

Scream into the void if you must. But don’t let his flagrant corruption and abuses of power go unchallenged. Demand his resignation. Dare Republicans to defend the indefensible. The rule of law may depend on it.

After all, history tells us that once an executive obtains power, it’s seldom given back.