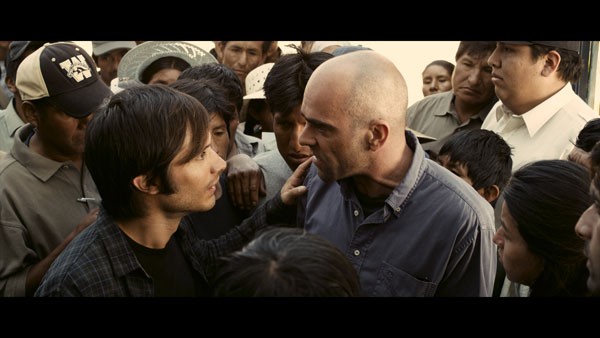 When I learned of the native people's uprising in Bolivia against their government for allowing corporations to steal their water supply - from their wells, their rivers, even their rainwater (hence the title of this film) - I remember thinking, "That's awful!" I don't remember thinking, "That's exactly like what Christopher Columbus did to that country 500 years ago, and now that I think of it, it's kind of like what film crews do on location." But then, I'm not Icíar Bollaín, the Spanish actress and director of Even the Rain, a film in which the fight against a water scheme in Cochabamba, Bolivia, in 2000 does serve as a parallel to American history and the politics of filmmaking.

Gael García Bernal plays Sebastian, a passionate, Herzogian figure looking for his own Aguirre: The Wrath of God. He's in Bolivia to shoot a film based on Columbus' colonization of, and in his view, barbarism toward, the native people. (The opening credits disclose that the film is dedicated to Howard Zinn, so you know Sebastian's film-within-a-film is going to be brutal.) Culling his cast from the impoverished people of Cochabamba, who will work for only two dollars a day, he marvels, the film and its crew are already drawing occasional  tsk-tsks for failing to see the irony in their  opportunism.

Their obliviousness seems all the more hostile when corporate contractors show up at the well, ready to draw up the water and slap a logo on it. Unexpectedly (in the film and in real life), the natives fight back. Unfortunately for the film crew, the actor playing the head of the Indian resistance against Columbus, Daniel (Juan Carlos Aduviri), also becomes the de facto leader of the people against the taking of their water.

From there, it's a race for Sebastian and his producer, Costa (Luis Tosar), to get the film done and get out of town. Meanwhile, Daniel gets thrown in prison and seems on track for martyrdom, other actors want to leave the country and Costa's on the verge of his own humanitarian crisis.

The major fault with Bollaín's film is a good problem to have: The Columbus film that Sebastian's mounting, which we see large chunks of in their finished form, is fantastic. Taking its energy from Fitzcarraldo and its look from Terrence Malick's The New World, it's an engrossing and gorgeous period piece, and its lead actors deliver impeccable performances. It's so good that when Even the Rain cuts back to reality to the increasingly riotous protests, it feels like a letdown.

While Bernal's intensely self-serious Sebastian nails the young idealist filmmaker in all his pseudo empathy and dedication to art - his art - in the face of real-world problems, he lacks the gravitas - Herzog's or Bollaín's - to suggest that the film he's making could possibly be as good as the footage we're seeing. He's too young, too green.

On the other hand, Tosar steals the show as the penny-pinching producer who startles himself with his own ability to feel. Equally startling is Karra Elejalde (Biutiful) as the formidable, dark Columbus and newcomer Aduviri as the polarizing actor/ movement leader.

The true star, however, is Bollaín. Making a film about making a film is a landmine, one that's both tripped up and rewarded directors for decades. Bollaín manages it wonderfully, almost too well.