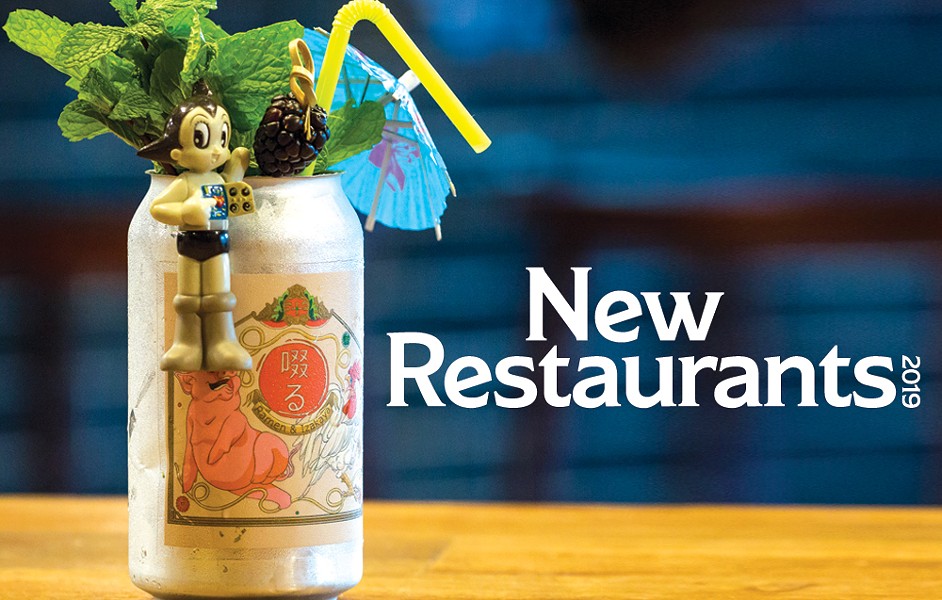 We're just a month into 2019 and it's beginning to look a lot like ... last year. That's not a bad thing, mind you. It just means our ever-diverse restaurant scene is getting a healthy dose of even more diversity – more ramen, more yakitori, more sushi, more Neapolitan pizza, more vegan eats, more tacos.

We've got the biggest name in gastronomy today – José Andrés – opening not one, but two Spanish concepts in Disney Springs – Jaleo and the first brick-and-mortar location of his popular D.C. food truck, Pepe – in the coming months. Food halls (and food hall-like venues) will finally gain traction as Henry's Depot, the Food Factory and Boxi Park get set to open, and word on the street is that there's more on the horizon.

Naturally there are plenty of rumors circulating about – this industry thrives on them – one of which has Greg Pranzo (Guy Fieri's American Kitchen & Bar, Cinco Tacos + Tequila, East Hampton Bait & Tackle Co.) opening a new concept, and another regarding Bruno Fonseca (Hunger Street Tacos, Millenia 106) doing the same. The Ravenous Pig's James Petrakis is also rumored to be involved in a downtown venture. And speaking of the Pig, they'll be taking over the Enterprise Rent-A-Car building next door to expand their brewing operations (that one's no rumor).

I'm sure we'll all raise a glass when they do, but for now, whet your appetites and get ready to wet your whistle at these newly open, and soon-to-open, restaurants in Orlando.


With locations in Miami, Fort Lauderdale and Tampa, this gastropub/sports lounge where "your favorite all-American food cravings are satisfied" will open its fourth outpost in the old Bar Louie space in the Rialto Plaza in Dr. Phillips. (Opening early May; 7335 W. Sand Lake Road; americansocialbar.com)


Clearly Black Bean Deli owner Andres Corton has an eye for transformation. His Cuban comfort-food spot on East Colonial Drive is housed inside a mid-century gem (formerly a gas station), while this second Winter Park location will move into the space where Winnie's Oriental Garden stood for many a year. The original BBD location on Mills will transition into a catering kitchen. (Opening late spring; 1346 N. Orange Ave., Winter Park; blackbeandeli.com)


JM Hospitality, the same group behind the 310 restaurants and Blu on the Avenue, will open this high-end refuge of red meat in the old Park Plaza Gardens space on Park Avenue. After a significant renovation, Bovine could arguably be the most handsome chophouse in the city. (Opening spring; 319 S. Park Ave., Winter Park; bovinesteakhouse.com)


The 30,000-square-foot park fashioned from shipping containers will see a mix of restaurants and bars grace the Lake Nona Town Center. Boxi Park will act as an incubator for restaurateurs wanting to test out new concepts with minimal risk and investment. Among the concepts announced are the Grill Next Door, Fowl Play, and Claw and Order. (Opening this winter; 6877 Tavistock Lakes Blvd.; boxiparklakenona.com)


If you've been to the Essex Street Market on the Lower East Side, the Plaza Food Hall in Midtown or the DeKalb Market Hall in Brooklyn, you may have indulged in a coffee and a pastry from Café D'Avignon. Now this NYC-based café/bakery will open its first outpost outside the Big Apple at Sunset Walk in the Margaritaville Resort, with more cafés along the way. (Opening spring; 3251 Margaritaville Blvd., Kissimmee; cafedavignon.com)

We were all a bit bummed by the closure of El Buda, Roberto Treviño's Latin-Asian concept on Church Street, but the former Iron Chef contestant will soon take charge of the Ceviche Bar inside the expanded Don Julio Mexican Kitchen & Tequila Bar space. (Opening spring; 551 S. Chickasaw Trail; donjuliobarandgrill.com)

Sure to satisfy your munchies, this Dr. Phillips taqueria has experienced a long delay in opening its build-a-taco concept – though, really, it's not all too surprising given the joint's name is Chronic Tacos. (Opening February; 7541 W. Sand Lake Road; chronictacos.com)

While not as highly anticipated as José Andrés' Jaleo, this Disney Springs restaurant will bring an "upscale" vibe to the sports bar experience along with more than 80 beers on tap. (Opening summer; Disney Springs; cityworksrestaurant.com)

Shaun "Dixie Dharma" Noonan and business partner/significant other Samantha Lawless were so moved after experiencing the vegetarian tasting menu last summer at Noma (Rene Redzepi's influential Copenhagen restaurant) that it inspired their new restaurant, which will serve a semblance of those rarefied and creative dishes in the Milk District. (Opening fall; 2428 E. Robinson St.; instagram.com/curateorlando)

The on-site restaurant inside the boutique hotel growing out of the old Doc's Streetside Grille space is being described as a "Cheers-style restaurant and bar" but one serving "an extensive mix of international cuisine in both small plate and shareable offerings." Hmm. One aspect sure to draw many a doc in the area – the 360-degree bar. (Opening March; 1315 S. Orange Ave.; eatdt.com)

The Belle Isle mainstay will open a second location inside the Maitland City Centre exposing those in 32751 to their down-home breakfast and lunch classics, including their signature sweet potato biscuit. (Opening summer; 190 Independence Lane, Maitland; dixiebellescafe.com)