Every Night the Trees Disappear 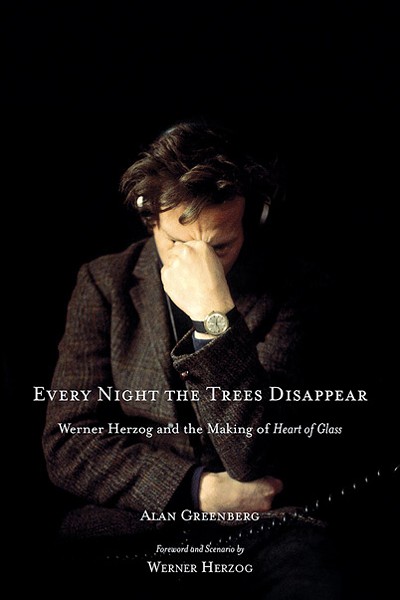 Every Night the Trees Disappear

When Hollywood adapts a beloved book, inevitably people say, “I want to read the book first.” Alan Greenberg's new book Every Night the Trees Disappear – about Werner Herzog's 1976 film Heart of Glass – inspires the opposite reaction: You want to see the movie first.

For one thing, it will allow you to skip over the sections of the book that contain the film's scenario. Even if you don't watch the film first, you must watch it if you want to read the book (and you can still skip the scenario, because, you must promise, you will watch the film).

The scenario is there to fill out what would otherwise be a slim volume comprising the author's recollections of the making of Heart of Glass. If you know anything about Herzog – the mad genius of film – then you can probably guess this is nothing like the “Making of Star Wars” TV special you saw as a kid. It is a philosophical rumination about an infinitely peculiar artist that takes you straight into the heart of darkness – or at least the Heart of Glass, which, as it turns out, is pretty dark.

In the film – set in a small village in Germany whose main industry is a glass factory that makes a famous red “ruby glass” – all the actors display stilted, jerky motions, bizarre speech and glassy, distant gazes. But without reading Greenberg's book, one would not know that Herzog achieved this effect by hypnotizing the actors – who were not professional actors at all, but rather people susceptible to hypnosis.

In the afterword, Herzog explains the rationale behind this strange method. “The story of a village community in Bavaria that walks straight into a foreseen and foretold disaster, almost like a community of sleepwalkers, needed a specific stylization,” he writes. Only the actor playing Hias, the prophet who foretells doom, and those portraying the master glassmakers (who were actually dealing with molten glass) were not hypnotized. “But the trance was not with the actors alone,” Herzog explains. “The film is permeated by images (and music) of a Land of Trance.” For that matter, watching the film puts the viewer into a similar trance. There was a several-hour period when I was convinced that Herzog had figured out a way to use film as a hypnotic method. (Herzog suggests as much in the afterword, so beware.)

Though Herzog is famed as one of the greatest directors in history, he is equally well-known for his eccentric personality and working methods. His epic battles with actor Klaus Kinski are legendary, as are his insane insistence that the crew of 1982's Fitzcarraldo actually lug a ship over an Amazonian mountain and the occasion when he ate his shoe on camera after losing a bet to documentarian Errol Morris.

It is the glimpse into this Herzog – the methodical madman with the camera – that makes Greenberg's book so compelling. Greenberg, now a filmmaker in his own right, met Herzog when he was a very young man. When Greenberg was sent to interview Herzog for a film journal in late 1975, the director immediately suggested that they “forget this interview; it's a waste of time. Make it up – say what you want.” Instead, they talked poetry, music and sports. At the end of the day, Herzog mentioned that his new film would involve hypnosis, and he asked Greenberg to join him.

As the book progresses, the hypnotism begins to play an increasingly minor role and we see deeper into Herzog's working methods. He filmed much of the movie near his childhood home, giving Greenberg the chance to engage both the director and the director's mother with reflections on Herzog's childhood. “As a boy he had some strange habits,” Mrs. Herzog says in the book. “At times I would look in and find him staring at a single object, the same object all day long.” Herzog adds, “I was very dangerous, and my character was peculiar. It was almost as if I had rabies.”

When Greenberg asks Herzog what he meant by “heart of glass,” the director tells him that it is a fragile inner state. “It also means transparency,” Herzog says. “And it means a glacial quality, as if some people have feelings from the freezer.”

Though Every Night the Trees Disappear is a candid picture of the great director, it is more glacial than transparent. We learn a lot about Herzog, but he remains a mystery, like the ruby glass that eludes the factory owner. In the end, the best way to understand Herzog's Heart of Glass is to watch it.