Every year, Project Censored gathers the most important stories that didn’t get the attention they deserve

Project Censored 2017: The news that didn't make the news 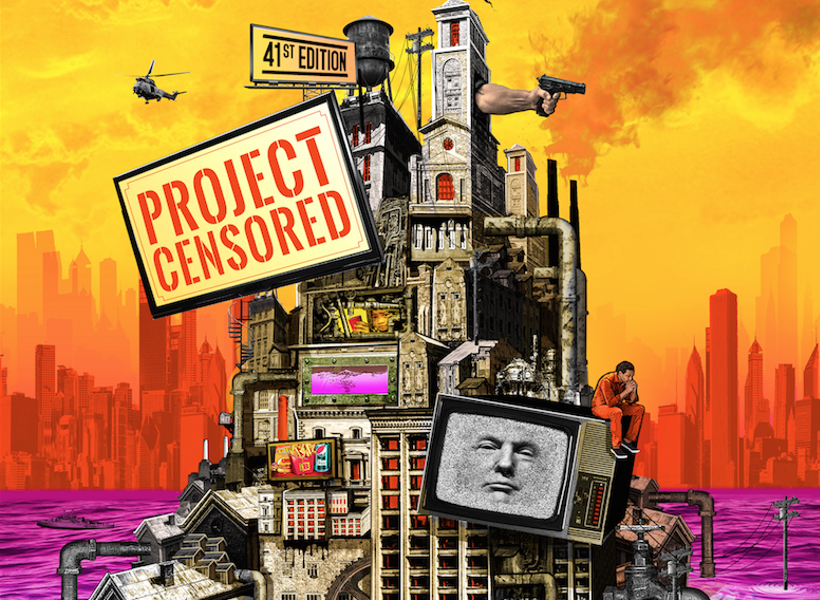 In America, we commonly think of press freedom and censorship in terms of the First Amendment, which focuses attention on the press itself and limits on the power of government to restrict it. But the Universal Declaration of Human Rights, drafted in the aftermath of World War II, presents a broader framework. Article 19 reads: "Everyone has the right to freedom of opinion and expression; this right includes freedom to hold opinions without interference and to seek, receive and impart information and ideas through any media and regardless of frontiers."

By highlighting the right to receive information and ideas, Article 19 makes it clear that press freedom is about everyone in society, not just the press, and that government censorship is only one potential way of thwarting that right. That's the perspective that has informed Project Censored from the beginning, more than 40 years ago.

Even though Project Censored's annual list focuses on specific censored stories, they've never been isolated examples of the underlying issues. They serve to highlight how far short we fall from the fully informed public that a healthy democracy requires – and that we all require in order to live healthy, safe, productive, satisfying lives. It's the larger patterns of missing information, hidden problems and threats that should really concern us. Each Project Censored story provides some of that information, but the annual list helps shed light on these broader patterns of what's missing, as well as on the specifics of the stories themselves.

Project Censored founder Carl Jensen defined censorship as "the suppression of information, whether purposeful or not, by any method – including bias, omission, underreporting or self-censorship – that prevents the public from fully knowing what is happening in its society."

In the introduction to the 2017 Project Censored book, Andy Lee Roth writes, "Finding common themes across news stories helps to contextualize each item as a part of the larger narratives shaping our times." These patterns don't just connect problems and issues, they connect people, communities and potential solutions as well. A shared understanding of the patterns that hold us down and divide us is the key to developing better patterns to live by together.

With that thought in mind, here is Project Censored's list of the Top 10 most underreported stories of 2016-2017.

After President Barack Obama declared a federal emergency in Flint, Michigan, based on lead contamination of the city's water supply in January 2016, Reuters reporters M.B. Pell and Joshua Schneyer began an investigation of lead contamination nationwide with shocking results. In June 2016, they reported that although many states and Medicaid rules require blood lead tests for young children, millions of children were not being tested. In December 2016, they reported on the highly decentralized data they had been able to assemble from 21 states, showing that 2,606 census tracts and 278 ZIP codes across the United States had levels of lead poisoning more than double the rates found in Flint at the peak of its contamination crisis. Of those, 1,100 communities had lead contamination rates "at least four times higher" than Flint.

Pell and Schneyer's neighborhood focus allowed them to identify local hotspots "whose lead poisoning problems may be obscured in broader surveys," such as those focused on statewide or countywide rates. They found them in communities that "stretch from Warren, Pennsylvania ... where 36 percent of children tested had high lead levels, to ... Goat Island, Texas, where a quarter of tests showed poisoning." What's more, "in some pockets of Baltimore, Cleveland and Philadelphia, where lead poisoning has spanned generations, the rate of elevated tests over the last decade was 40 to 50 percent."

There's a deeper infrastructure problem involved, as Farron Cousins reported for DeSmogBlog in January 2017. "Lead pipes are time bombs," and water contamination is to be expected, Cousins wrote. The U.S. relies on an estimated 1.2 million miles of lead pipes for municipal delivery of drinking water, and much of this aging infrastructure is reaching or has exceeded its lifespan.

In 2012 the American Water Works Association estimated that a complete overhaul of the nation's aging water systems would require an investment of $1 trillion over the next 25 years, which could triple household water bills. A January 2017 Michigan State University study found that "water rates are currently unaffordable for an estimated 11.9 percent of households." As Cousins concluded, "While the water contamination crisis will occasionally steal a headline or two, virtually no attention has been paid to the fact that we're pricing a third of United States citizens out of the water market."

2. Over $6 trillion in unaccountable Army spending

In 1996, Congress passed legislation requiring all government agencies to undergo annual audits, but a July 2016 report by the Defense Department’s inspector general found that the Army alone has accumulated $6.5 trillion in expenditures that can’t be accounted for over the past two decades.

As Dave Lindorff reported for This Can’t Be Happening!, the DoD “has not been tracking or recording or auditing all of the taxpayer money allocated by Congress – what it was spent on, how well it was spent, or where the money actually ended up.” But the Army wasn’t alone. “Things aren’t any better at the Navy, Air Force and Marines,” he added.

The report appeared at a time when, “politicians of both major political parties are demanding accountability for every penny spent on welfare. … Ditto for people receiving unemployment compensation,” Lindorff wrote. Politicians have also engaged in pervasive efforts “to make teachers accountable for student ‘performance,’” he added. Yet, he observed, “the military doesn’t have to account for any of its trillions of dollars of spending … even though Congress fully a generation ago passed a law requiring such accountability.”

In March 2017, after Trump proposed a $52 billion increase in military spending, Thomas Hedges reported for The Guardian that, “the Pentagon has exempted itself without consequence for 20 years now, telling the Government Accountability Office that collecting and organizing the required information for a full audit is too costly and time-consuming.”

The most recent DoD audit deadline was September 2017, yet neither the Pentagon, Congress, nor the media seem to have paid any attention.

Concern over Russian involvement in promoting fake news during the 2016 election is a justified hot topic in the news. But what about our own involvement in similar operations? In October 2016, Crofton Black and Abigail Fielding-Smith reported for the Bureau of Investigative Journalism on one such very expensive – and questionable – operation. The Pentagon paid a British PR firm, Bell Pottinger, more than $660 million to run a top-secret propaganda program in Iraq from at least 2006 to December 2011. The work consisted of three types of products: TV commercials portraying al-Qaeda in a negative light, news items intended to look like Arabic TV, and – most disturbing – fake al-Qaeda propaganda films.

A former Bell Pottinger video editor, Martin Wells, told the Bureau that he was given precise instructions for production of fake al-Qaeda films, and that the firm’s output was approved by former General David Petraeus – the commander of the coalition forces in Iraq – and on occasion by the White House. They reported that the United States used contractors because “the military didn’t have the in-house expertise and was operating in a legal ‘grey area.’”

Documents show that Bell Pottinger employed as many as three hundred British and Iraqi staff at one point; and its media operations in Iraq cost more than $100 million per year on average. It’s remarkable that an operation on this scale has been totally ignored in midst of so much focus on “fake news” here in the United States.

4. Voter suppression in the 2016 presidential election

The 2016 election was the first election in 50 years without the full protection of the Voting Rights Act, first passed in 1965. In Shelby County v. Holder (2013), a 5-4 conservative majority in the Supreme Court struck down a key provision requiring jurisdictions with a history of violations to "pre-clear" changes. As a result, changes to voting laws in nine states and parts of six others with long histories of racial discrimination in voting were no longer subject to federal government approval in advance.

Since Shelby, 14 states, including many Southern states and key swing states, implemented new voting restrictions, in many cases just in time for the election. These included restrictive voter-identification laws in Texas and North Carolina; English-only elections in many Florida counties, as well as last-minute changes of poll locations; and changes in Arizona voting laws that had previously been rejected by the Department of Justice before the Shelby decision.

Ari Berman, author of Give Us the Ballot: The Modern Struggle for Voting Rights in America, was foremost among a small number of journalists to cover the suppression efforts and their results. In May 2017, he reported on an analysis of the effects of voter suppression by Priorities U.S.A., which showed that strict voter-ID laws in Wisconsin and other states resulted in a "significant reduction" in voter turnout in 2016 with "a disproportionate impact on African-American and Democratic-leaning voters." Berman noted that turnout was reduced by 200,000 votes in Wisconsin, while Donald Trump won the state by just over 22,000 votes.

Nationwide, the study found that the change in voter turnout from 2012 to 2016 was significantly impacted by new voter-ID laws. In counties that were more than 40 percent African-American, turnout dropped 5 percent with new voter-ID laws, compared to 2.2 percent without. In counties that were less than 10 percent African-American, turnout decreased 0.7 percent with new voter-ID laws, compared to a 1.9 percent increase without. As Berman concluded, "This study provides more evidence for the claim that voter-ID laws are designed not to stop voter impersonation fraud, which is virtually nonexistent, but to make it harder for certain communities to vote."

As Berman noted in an article published by Moyers & Co. in December 2016, the topic of "gutting" the Voting Rights Act did not arise once during the 26 presidential debates prior to the election, while "[c]able news devoted hours and hours to Trump's absurd claim that the election was rigged against him while spending precious little time on the real threat that voters faced."