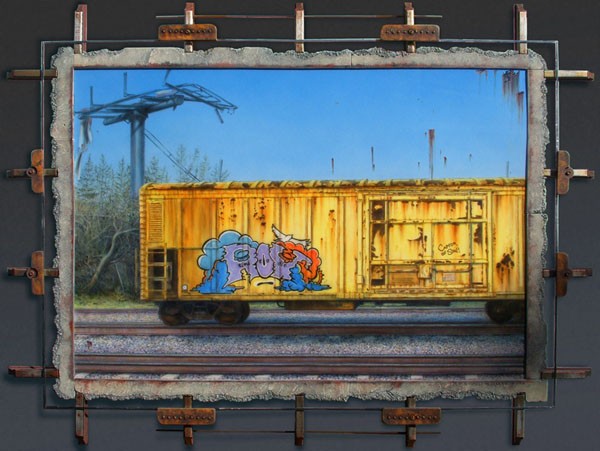 
On Dec. 11, in a space hewn from what was once just a rough warehouse, three Orlando artists – Brian Heeter (B Heeter Productions), Brian Demchak (Decoy/Takedown magazine) and Robin Van Arsdol (RV) – held an opening and launch party for Realm54. It was the first show for Realm54, which the operators say isn’t a gallery but a multi-use space that’ll be open for all manner of arts-related events, and it featured artwork from 54 artists (“A coincidence, I swear!” insists Demchak) from Orlando and beyond, gathered from an open call for artists. The space was packed for its debut, and the overall vibe was exuberant; even in our troubled zeitgeist, the mood was somehow reassuring: Every-thing’s gonna  be alright.

At the front of the space, near the entry, Canadian Brian Lanier sets a surreal stage with his two paintings. One features a ghostly tugboat, and it hovers over the other, a dark portrait of a ghost-whispering heart. Nearby are some oddly twisted portraits, liquid and dreamlike, by local artists Jennifer Payne and Nannette Cherry, and a piece by local artist Joe Korte, whose machine aesthetic is beautifully executed in a piece that romanticizes the life of the graffiti artist in surrealistic Bob Ross-like, soft-focus scenery and color. Further into the gallery, works by artists from Portland and Illinois mix with those of locals in a long, narrow hall filled with multiple small pieces. The effect contributes to a sense of the dystopian present – the unease and vulnerability of our psyches laid bare by Orlando artist Lucy Fur’s portrait of a nude girl caught by surprise, her fingers held in a defensive, claw-like pose.

Upon entering the gallery’s dark inner sanctum, viewers encounter an installation of street-sized proportions orchestrated by Demchak and Heeter. Black and white ink transfers of machine screws made by Heeter are ominous and glossy, mounted on rigid panels. A small black booth invites viewers to look at a reflection of themselves that’s layered into a receding array of giant screws –  a visual pun, perhaps, on the saying “I’m screwed!” At the booth’s exit are two dramatic mural-sized pieces by Demchak featuring stencils of a chest laid bare to reveal a red and black alien-looking network pulsing behind the suit-and-tied human body.

Outside of the installation room are B-Side Artist collective’s founder Christopher Tobar Rodriguez’s mixed-media paintings of urban bicyclists with thought balloons blossoming from their heads and a portrait of Pee Wee Herman, flashing his unflattering wry smile, by local artist Tracy Burke.

Yet another room in the gallery features the work of RV. His installation of 24 paintings on paper featuring red and white Pinocchio heads – a statement on the talking heads of mainstream media, perhaps, or a symbol of penance for misdeeds? – adorns an earth-tone wall. It lends a sense of studied absurdity to the space. Yet  it’s an absurdity all too familiar in Orlando, which hosted RV as a resident artist for so long and witnessed his evolution as a street artist known for using torches to sculpt Camaro hoods and for inviting graffiti artists from around the world to participate in Pintura projects –  weekend-long spray-a-thons that decorated warehouses downtown with colorful  graffiti murals.

At Realm 54, his presence seems somehow less raw and more reflective. Here RV is painterly – some work is even framed –  but no less potent in its energy.

Amid the murky drizzle of recent gallery closings and mergers – Creative Spirit and Comma are closing their doors, the Maitland Art Center and Maitland Historical Society have combined efforts – RV and his collaborators have created a space that provides some hope that the art scene can continue to grow and evolve in this region, even against the grim backdrop of Florida’s Millennial Depression. The bustle in the new gallery is refreshing, the abundance of talent impressive and the brave startup reassuring for artists looking for a new stage in Orlando’s art scene.