Exploring the bump and grind across Orlando's coolest clubs

Orlando's club-scene history has been rattled more than shooters in a cocktail shaker. At one point, it rivaled major theme parks for its enviable draw and attracted national attention for the regular, thriving rave scene happening at places like Club Firestone and the Edge – that was before the city passed an anti-rave law in the 1990s and pulled the plug on the all-night strobe lights (see page 20 for our Orlando nightlife timeline). Despite some bumps in the road and a decline in tourist attendance, though, local hot spots still welcome an adventurous nightlife crowd at clubs strewn throughout the city. For the first time in decades, Orlando even has an after-hours club again, with the recent opening of Club Nokturnal (see page 15). You could say that things are looking up for those who like to get turnt up.

To end the year, we didn't want to look back with any sort of heady commentary on what went wrong or right in regard to the city's club scene (there was certainly plenty to talk about all year long). We just wanted to get a better feel for what it had to offer, so we hit some of Orlando's favorite clubs to see what kind of liveliness we could find in the dead of night. Consider this our way of finding your hand on the dance floor and leading you to VIP as we explore the scenes at some of Orlando's most vibrant and vibin' joints. 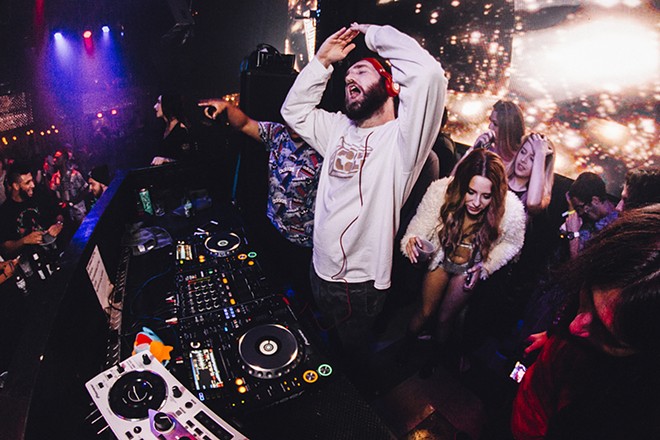 Gilt Nightclub
740 Bennett Road, 407-504-7699, giltnightclub.com
Cover: $10
Dress code: (for guys only) No shorts, tanks, sandals/flip-flops or hats
Music: Depends on the night. Wednesday-Friday: Latin, Thursday-Sunday: techno, hip-hop, rave, dubstep
What it's like inside: A step up from its predecessor Roxy, Gilt is an opulent and spacious warehouse of a club, with two rooms and two levels. As the doors open around 10 p.m. at this seemingly misplaced temple of sin (hidden behind an unkempt and overgrown landscape, just a stone's throw from Baldwin Park), a young, college-age crowd dressed from slobbish to starlet starts lining up outside. The line moves quickly, though, as security screening is seemingly nonexistent. Once inside, your senses are assaulted by the sparkling shimmer of gaudy decor, wafting clouds of pungent hookah smoke and an eardrum-throbbing wobble from a DJ perched on a pedestal. If you get there before 11 p.m., don't expect to see anyone on the dance floor. Do expect a crowded VIP section where most of the early action takes place. Toward midnight, the upstairs area opens and the place fills up. Scantily dressed bartenders roam the dance floor offering $6 shots out of test tubes while hookahs set up at tables positioned around the dance floor can be rented by the hour or the night. Bring a date. Come late. – Justin Braun