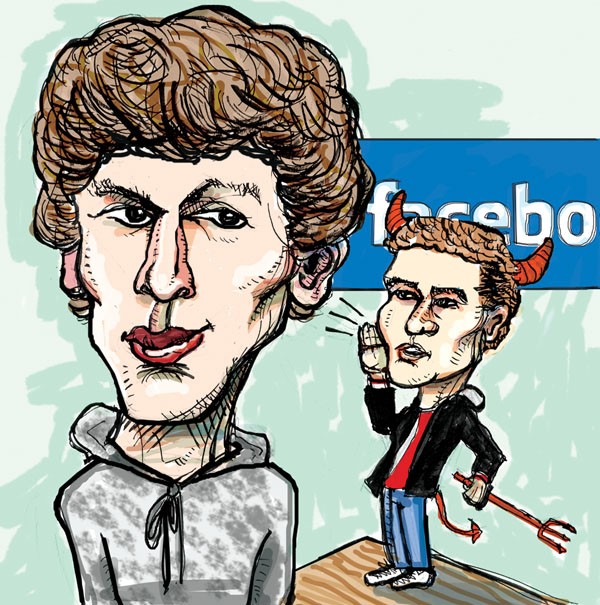 Don’t let the late-coming Oscar downers fool you: 2010 was all about hope and optimism returning to the multiplex. It was there from the year’s first week in Nicolas Cage’s bizarro-noir turn in Bad Lieutenant: Port of Call – New Orleans and it was there in Hit-Girl’s shit-eating Kick-Ass grin. It permeated Toy Story 3’s homages to The Bridge on the River Kwai and Cool Hand Luke, and it was slathered all over Jeff Bridges’ whiskey-soaked True Grit beard. It’s the love of storytelling, and this year’s moviegoers rejected the nihilism of Robin Hood and the self-seriousness of The Last Airbender in its favor. That’s a “win” any way you cut it.

Be sure to visit www.orlandoweekly.com for our 2010 Best in Film Honorable Mentions!

1. The Social Network – What begins as a simple battle between the geeks and the cool kids – tech scholarships vs. WASP legacies – ends with everyone losing. What Aaron Sorkin and David Fincher’s exploration of the origins of Facebook managed to cram in between – ambition, jealousy, revenge, billion-dollar stakes and the connectivity of the world – was told in a more thrilling, breakneck-paced, smarter and funnier way than any other film this year. (on DVD Jan. 11)

2. Scott Pilgrim vs. the World – Director Edgar Wright pulled off a better postmodern romance than last year’s 500 Days of Summer, with Michael Cera coming into his own as a lost 20-something garage-banding his way through life until he meets Mary Elizabeth Winstead’s unobtainable Ramona. That plotline works well enough, but when Cera’s Pilgrim is thrust into an arcade world of epic battles he must win to be with Ramona, the result is gonzo filmmaking the likes of which I’ve never seen. (now on DVD)

3. Exit Through the Gift Shop – From the exuberant opening montage set to “Tonight the Streets Are Ours,” Banksy’s documentary, which challenged our perception of art while simultaneously luxuriating in the ecstasy of an emerging style on the brink of becoming a worldwide commodity, took me places I never thought I’d enjoy so much. (now on DVD)

4. Blue Valentine – Director Derek Cianfrance’s debut film, 1998’s Brother Tied, was first embraced by the Florida Film Festival. While in town at the time, Cianfrance was heard talking about Blue Valentine, a script he was putting his all into. Twelve years later, that script became a heart-wrenching film featuring the talented Ryan Gosling and Michelle Williams in their best roles. In its portrait of a couple on the brink of divorce, Valentine feels so real and is so powerfully portrayed, that it put me in an emotional funk for a couple of days after seeing it. The last film that hit me that hard: Eternal Sunshine of the Spotless Mind. (in Orlando theaters Jan. 2011)

5. The Kids Are All Right – In helming a story of a couple thrown into turmoil by the arrival of their kids’ biological father, Lisa Cholodenko avoided melodrama in favor of natural emotional ebbs and flows. The scene where Annette Bening sings Joni Mitchell at the dinner table is at once the funniest and saddest cinematic moment of the year. (now on DVD)

7. Restrepo – I’ve heard it said that what America needs to be emotionally connected to our current war is war footage, the kind that flooded people’s homes on a nightly basis during Vietnam. This is that footage, though it’s far from partisan. Following a platoon for a year through the deadliest place on earth, the only thing to conclude about the Afghanistan War after viewing Restrepo is that our troops are, a) just kids, and b) tough as nails. (now on DVD)

8. Karate Kid – So ingrained in ’80s pop culture was the original Karate Kid that its touching qualities and peerlessly executed triumph is easily overlooked, including an Oscar-nominated performance by Pat Morita. This “update” could have taken that for granted as well. It didn’t. Written, directed and acted in the alternately meditative and attitudinal spirit of its origin, the Jackie Chan-starring, kung fu-focused remake soared with an Eastern majesty and a Western smirk. (now on DVD)

9. Easy A – With her flame-red hair, it’s too easy to compare the young Emma Stone to Lucille Ball, but Stone’s soul-piercing gaze and disarming ease in front of the camera make it an apt one. Stepping into the spotlight as if she was always there, Stone chewed up director Will Gluck’s smart-teen setup – a jaded, liberal wiseass takes on Hawthornian high school puritans – and spat out something entirely fresh. Gluck, meanwhile, proved that the surprising charm of his debut, the should’ve-been-awful Fired Up!, was no fluke. (now on DVD)

10. Jack Goes Boating – Unlike so many quirky-for-the-sake-of-quirkiness indie leads, Philip Seymour Hoffman’s titular character in this adaptation of the Robert Glaudini play wants to grow as a person, and he has a big heart. Jack Goes Boating is the anti-Greenberg: a human tale with characters who consider others’ feelings, not just their own. (on DVD Jan. 18)

Speaking of Greenberg, I’m naming it the year’s worst film. Starring Ben Stiller and directed by Noah Baumbach, it’s a film by assholes, for assholes, about assholes. Knowing and self-loathing or not, the world its characters inhabit is insular, grim and completely of their own making. That doesn’t make them anti-heroes; it makes them sociopaths. Baumbach has said in interviews that he thinks it’s funny how awful Stiller’s character is. You know who else tried to pull that stunt this year? Joaquin Phoenix. Phoenix is an idiot. Baumbach is not. He should’ve  known better.

“Every creation myth needs a devil,” Rashida Jones’ character explains to Jesse Eisenberg’s in The Social Network, and she’s right. This was the year in film where ambition and adoration came back to bite characters in the ass. Mark Zuckerberg’s drive to create Facebook cost him his closest friends. Mattie Ross’ quest to avenge her murdered father took a physical and emotional toll in True Grit. Nina Sayers’ pursuit of artistic perfection wreaked havoc on her psyche in Black Swan, Olive Penderghast’s self-generated rumors of promiscuity built up and tore down her reputation in Easy A, and both of Leonardo DiCaprio’s grief-stricken men in Inception and Shutter Island lost themselves to grand illusion and grim delusion. Maybe that’s bleak, but the films mentioned above and listed below saddened, angered, tickled and thrilled me all the same. Some of these didn’t open here properly, but still deserve some love; if they’re not on DVD or VOD already, they will be soon. As for a few others – Rabbit Hole, Another Year, Blue Valentine and The Way Back – that won’t open locally until early next year, let me simply say they’re all well worth keeping on your radar.

1. The Social Network – What threatened to be merely “the Facebook movie” was instead fashioned by director David Fincher, writer Aaron Sorkin and an impeccable ensemble into a surprisingly timeless, sharply funny look at what happens in an age when achievement and betrayal are just a mouse click away.

2. True Grit – The Coens’ seemingly straight-forward take on the Western thrills and amuses in its old-fashioned approach, but lurking just beneath the surface of stellar performances and period-perfect dialogue is a moral ambiguity every bit as relevant in our day and age. (now in theaters)

3. And Everything is Going Fine – Crafted by Steven Soderbergh as a tribute to the late Spalding Gray, this pastiche of interviews and recorded performances builds into an abstractly moving testament to how stories and lives must be shared in order to be valued. (now on VOD)

4. Dogtooth – Replace Michael Haneke’s sense of disdain for his audience with a dark sense of humor and you have a rough idea of what to expect from this thoroughly unique Greek tale of unconventional parenting. (on DVD Jan. 25)

5. The Good, The Bad, The Weird – Like the bastard child of The Good, The Bad, and the Ugly and Kung Fu Hustle, this South Korean homage to the spaghetti Western offered up the most go-for-broke popcorn thrills of any action movie this year with its mid-point horse/tank/truck chase as perhaps the most exhilarating action sequence of the year. (now on DVD)

6. The Red Riding trilogy – This epic three-part crime drama unfolds with the scope of a great novel, but its first segment, “1974,” is arguably the best of the bunch: A steadily gripping investigation into what at first appears to be a serial killer case. (now on DVD)

7. Black Swan – Darren Aronofsky’s fever dream of a film focuses on a psychologically fragile ballerina, played by a never-better Natalie Portman, and volleys from being a ripe showbiz melodrama, a disturbing sexual awakening and, ultimately, a beautiful demonstration of the strife that art often requires. (now in theaters)

8. The Square – A crackling directorial debut by Aussie Nash Edgerton, this neo-noir tightens the screws on a desperate couple whose plans to take the money and run unravel in spectacular fashion. (now on DVD)

9. The Tillman Story – In what can easily be considered an exceptional year for documentaries, one of the finest – an infuriating look at the deceptive decoration of football-player-turned-solider Pat Tillman – was unceremoniously dumped in Orlando on only one screen. (on DVD Feb. 1)

10. Scott Pilgrim vs. the World – Edgar Wright took the typical rom-com onscreen baggage between young lovers and brilliantly literalized it in his live-wire adaptation of Bryan Lee O’Malley’s graphic novels.

And the worst film of the year? Standing Ovation, which snuck onto more than 600 screens the same weekend Inception opened and showcased dozens of shrill moppets as they competed for stardom in Atlantic City. If it had merely been crammed to the gills with limp musical numbers and mind-boggling slapstick (which it totally is), that would’ve been one thing; what’s even worse is that the film espouses all the worst notions of modern celebrity. To call these girls “devils” seems a bit harsh, but the all-American myth of fame being valued over talent could stand to be perpetuated a little less by their parents.