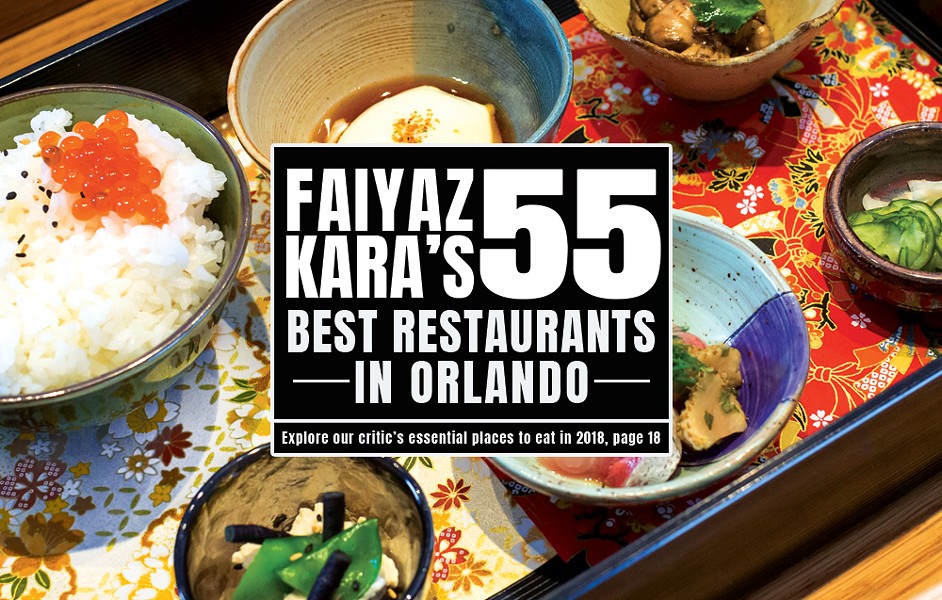 “So what’s your favorite place to eat in town?” It’s a question I get asked about as often as the James Beard Foundation snubs Orlando’s chefs and restaurants for its annual awards – that is to say, a lot. My usual response – “Arby’s” – is typically met with a grimace, an empty stare, or a look that says Jeez, what a dick. When I first started reviewing restaurants for this fine publication back in 2006, coming up with a list of the 55 best restaurants in Orlando would’ve been – well, it just wouldn’t have been. Ten? Maybe. Fifty-five? Oh hell no. But that was long before our culinary age of enlightenment, when the unfamiliar tested the establishment; when genre-bending became the norm; when chefs wittingly tested our palates; and when restaurants of renown began gracing our city’s neighborhoods, hotels and, yep, theme parks.

I’ve had the honor, and the pleasure, of ingesting it all and it’s been nothing but fun. We’ve seen a bevy of Best Of lists released by various publications, including our very own, but this list makes an earnest effort to answer the question, “Mr. Kara, in your well-informed and battle-tested opinion, what are the best places to eat in town?” For each of the 55 restaurants ranked and listed below, I can state unreservedly that they’ve granted me some mighty fine meals, and memories.

The city's omakase game has gone banzai over the past couple of years, and the artistes at this Audubon Park nine-seater – Jennifer Bañagale, Mark Berdin and Lordfer Lalicon – work the white-oak slab, slicing, dicing and plating with such extreme care and precision you might not notice the sexagenarian next to you cringing at the piped-in lyrics of "The Next Episode." You wouldn't think it, but watching A5 Miyazaki beef being chopsticked onto a giant Pacific oyster shell, or seeing rinds of kaffir lime knifed into bowls for ... wait for it ... cod sperm soup, can be downright mesmerizing. Oh, there's a fair amount of flair, but pizzazz often takes a back seat to minimalist aesthetics, quality ingredients (fish is flown in from Japan twice, sometimes thrice, weekly) and an adherence to longstanding methods and rituals. I swooned over the trio's East End Market effort Kappo but, behind the dark, shadowy exterior of Kadence, I've tripped the light fantastic. (kadenceorlando.com) 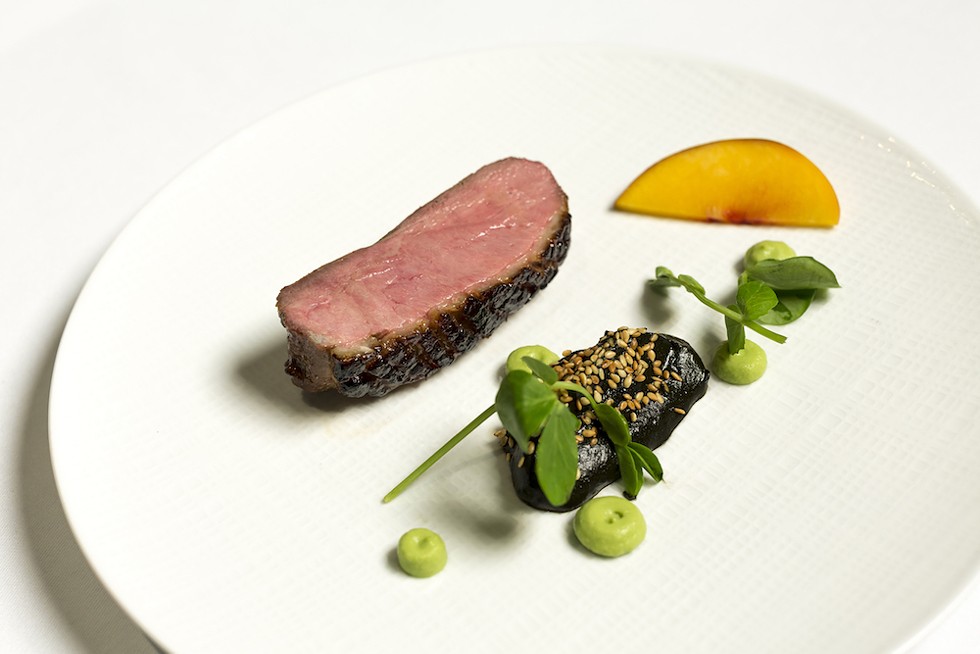 Fine dining is indeed alive and well, and at this perennial stalwart within the gilded walls of the Ritz-Carlton Grande Lakes, so is fusion cuisine – thanks to celebrated chef Norman Van Aken, who leaves the execution of his "New World" fare in the capable hands of executive chef Andres Mendoza. The menu's Latin-Caribbean DNA has seen little mutation through the past 15 years, though influences from China and North Africa make the occasional foray. Mendoza's tasting menu is the most accomplished in the city – a hickory-smoked tenderloin of American bison with Okinawa potato, Brussels sprouts, chimichurri verde, carrot tuiles and a black fig jus; or peach-barbecued Rohan duck breast with mole negro should give you an idea as to what to expect – and the doting service is unparalleled. (normans.com) 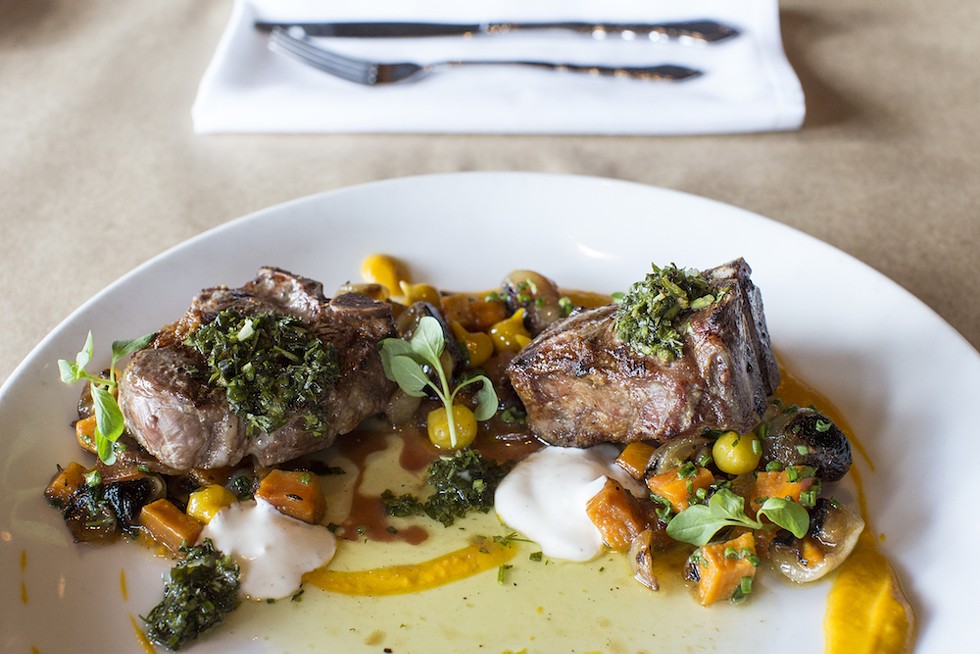 The "American gastropub" appellation may have been nixed, but it's never been more apropos for the Ravenous Pig since James and Julie Petrakis moved the restaurant to the Cask & Larder's old digs and inherited an in-house brewery. But the Pig is far more than your average gastropub – for one, the Petrakises have always adhered to a strict ethic of sourcing local, seasonal and sustainable ingredients. Couple that with CIA-trained techniques and a creatively unpretentious bill of Southern fare and it's no wonder they've brought their Winter Park restaurant national acclaim and multiple James Beard Foundation Award noms. Plus, it's one of the few restaurants embedded in the consciousness of the food intelligentsia outside our city. (theravenouspig.com) 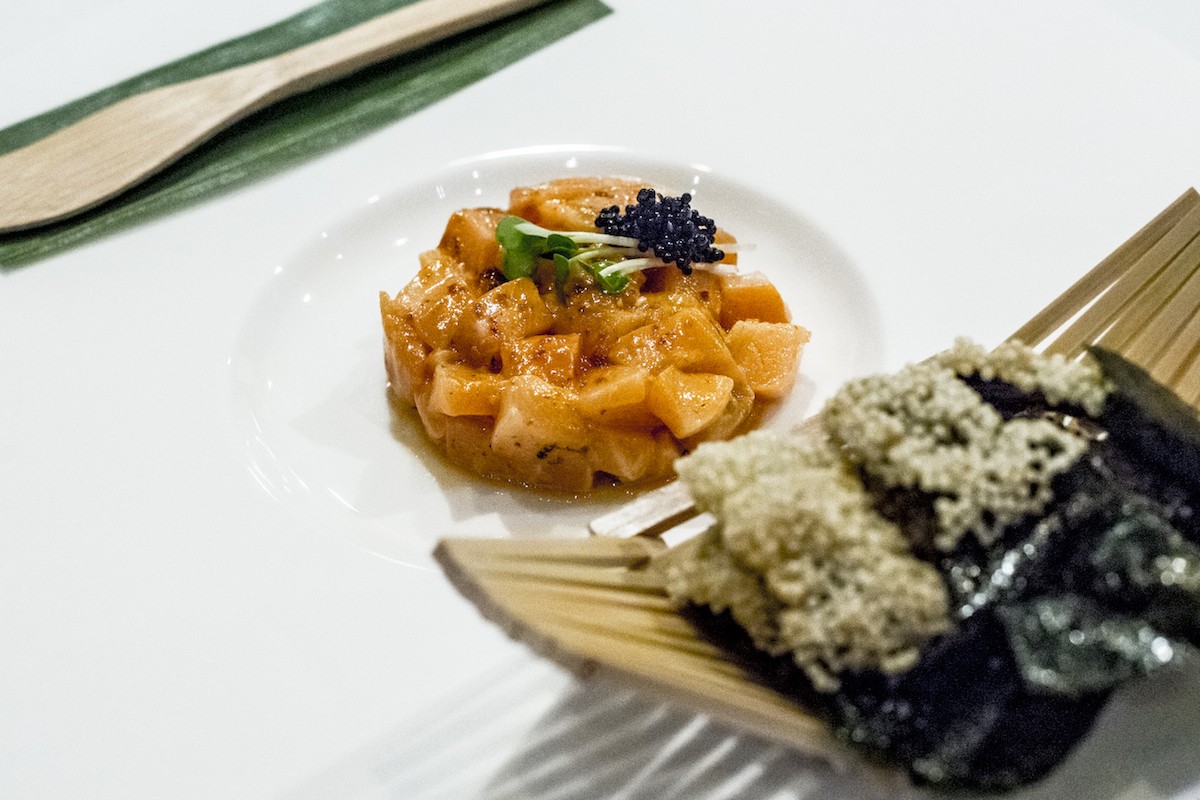 I'll just say it: Henry Moso is Orlando's most creative sushi chef and if you've dropped a pretty penny to experience one of his extravagant, multicourse omakase free-for-alls, you already know that. If you haven't, prepare to be floored. No, it may not summon memories of the traditionalist experience you had in the Ginza but, at Kabooki, Moso fuses imagination and fresh ingredients in a balancing act that's worthy of an encore. Watch what he does with live Boston scallops, or New Zealand steelhead trout, or Japanese red sea bream and rejoice in the flavors he conjures. Only ingredients of the highest order are good enough for Moso, and while the dining room itself could use a bit of a refresh, those patrolling the confined quarters are as knowledgeable as they come. (kabookisushi.com)

The grande dame of Disney's restaurant empire may have lost relevancy amongst the city's attention-deprived foodie contingents with its dated interior and pricey degustation of fussy fare, but tweezers, squeeze bottles, microgreens or not, executive chef Scott Hunnel still dazzles, incorporating foie, truffles, caviar and other haute standbys into his carefully curated tasting menu. It makes for refined dining in the vein of Jöel Robuchon (R.I.P.), Thomas Keller, Daniel Boulud et al. even if Hunnel never quite attains their rarefied heights. Still, it's a unique throwback experience (servers are called "maids" and "butlers" here) of a slowly disappearing type. Not to mention the people-watching – Vic & Al's likely has the highest percentage of "special occasion" diners of any restaurant in the city. (victoria-alberts.com)