'Fake news' is a real crisis

A nationwide call to protect America's free and independent press

Today, Orlando Weekly joins hundreds of media outlets around the country in responding to President Donald Trump’s repeated attacks on journalists, and calling on the public to recognize the importance of a free and independent press. Thank you for your readership, consideration and support.

Orlando is the first city in the country experimenting with real-time facial recognition surveillance, in a form unprecedented among American law enforcement.

After the Donald J. Trump Foundation made a $25,000 donation to Attorney General Pam Bondi’s re-election fund, Bondi decided not to pursue a fraud suit against Trump’s real estate “university.”

What do these things have in common?

Floridians wouldn’t know about any of them without journalists.

In the spirit of shining a light in the dark corners where unchecked corruption flourishes, tenacious reporters across the state followed the paper trail and did the legwork to serve the public’s right to know. (In the case of Bondi, despite the terrible optics, further public records analysis showed that Trump wrote the check four days before Bondi was made aware of the Florida complaint ... more evidence that good reporters are interested in pursuing the truth, regardless of political agenda.)*

And yet, our current president insists on demonizing the free press as “the enemy of the people.” 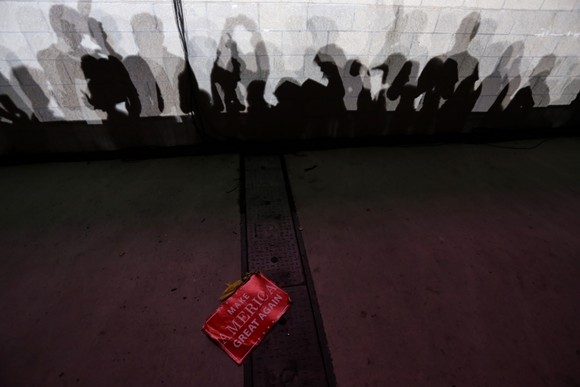 Today, thousands of journalists across the country are joining together to call for an end to President Trump’s divisive and vicious rhetoric.

We are not your enemy. We sweat, bleed and ruin our eyesight staring at computer screens for hours in pursuit of the truth. And we’re not afraid to give it to you straight – especially against this administration’s tsunami of falsehoods and misinformation, both the pointless and the perilous.

Keeping the public educated is not for the thin-skinned. We’re tough enough to take some hard words – “sticks and stones” and all that. And when it was just a matter of the candidate mocking a disabled reporter on the dais or hundreds of inflamed Trump supporters screaming abuse at the working press, it was repulsive and frightening, but not physically dangerous.

But it’s gone beyond the insults and jeering. Hostility has escalated into harm. Reporters across the nation have been screamed at, doxxed and arrested while trying to do their jobs – keeping YOU informed. This administration has perpetuated a climate that normalizes and encourages abuse from the top down, and that climate has empowered members of the public to threaten reporters’ lives as well as their livelihoods. American journalists have been shoved, body-slammed and, yes, murdered in the past 18 months.

When the president manages to make “news I don’t agree with” synonymous with “fake news,” it can have severe consequences. At its worst, it erodes the public’s trust in the media and fosters a government based in nepotism, malfeasance and authoritarianism. At its deadliest, it allows the killing of reporters with impunity. In June, a shooter who had harassed journalists at the Annapolis Capital-Gazette for years because he didn’t like a story they wrote about him finally felt entitled enough to gun them down, killing five.

That’s not the America we’ve lived in for more than 200 years, since the founding fathers wrote that “Congress shall make no law abridging the freedom of speech or of the press.” Until very recently, the systematic denigration and imprisonment of the press was not a commonplace occurrence in America – that sort of thing was the province of dictatorships.

The press is not perfect. We make mistakes, though we work diligently to correct them. But we are an independent monitor of power over the few who hold it – and one of the last guards against the death of democracy.