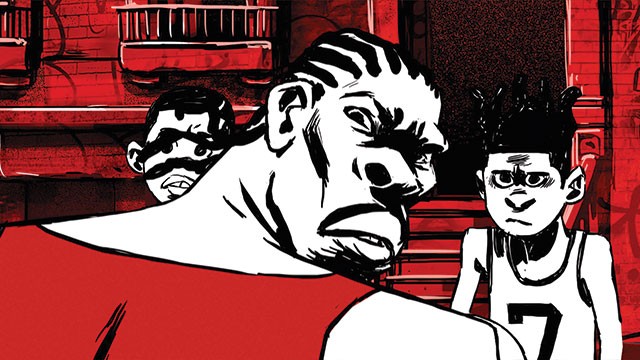 What’s not to love about the films our local theaters have lined up for us this fall? In addition to the usual wide releases, which are kind of like the fast food of your film diet, the local film community has some more nutritional offerings for you. Not nutritional like bran muffins, though – more like the avocado and quinoa to your white bread and french fries. From a festival of short films from around the globe to a found-footage festival to a screening of the 30th anniversary release of the Talking Heads’ acclaimed Stop Making Sense concert doc, feed your head with some of the good stuff coming to a theater near you.

Sept. 29-Oct. 5
Manhattan Short Film Festival
We love that the Enzian plays host to this global film festival, in which 10 short films, selected from 589 submissions from independent filmmakers around the world, are screened at 250 cinemas, museums and universities on different continents. Audience members receive ballots when they arrive, and they are asked to vote for Best Film and Best Actor. Participating theaters tally the votes and send them on to the Manhattan Film Festival, which announces the winners on Oct. 6. It’s more than just a contest, though – this event unites international audiences together during the same week each year to work on a project together. It’s a unique event that brings movies that would likely never cross international boundaries to diverse audiences around the world. New talent, new films, new horizons. What’s not to love? Enzian Theatre, 1300 Orlando Ave., Maitland, 407-629-0054, $10, enzian.org

Oct. 11-13
Beyond Bollywood: The 20th Annual South Asian Film Festival
Bollywood is both a blessing and a curse for South Asian film – the over-the-top glitzy Bollywood film put the region on the radar, as far as the filmmaking industry goes, but it also created a ridiculous stereotype of what a South Asian film looks like. But don’t let yourself be blinded by Bollywood’s flash dance numbers and insanely attractive actors and actresses – there are plenty of serious South Asian filmmakers who aren’t interested in perpetuating stereotypes about their culture. Check out the offerings at this year’s South Asian Film Festival, for instance: Beyond All Boundaries is a documentary that explores the extremes to which some fans of cricket in India will go to support their team; Siddharth tells the story of a poverty-stricken man who sends his son off to work in a factory to make ends meet, and he fears the worst when the boy fails to come home for the Diwali holiday; Hank and Asha tells the story of an Indian woman studying in Prague who begins exchanging video letters with a man in New York. There’s nothing glittery or melodramatic about these films. Rather, they’re gritty and real and showcase the true cultural undercurrents that shape South Asian life. Enzian Theater, 1300 Orlando Ave., Maitland, 407-629-0054, $10, enzian.org

Oct. 24-26
Freak Show Horror Film Festival
Just in time for Halloween, Spooky Empire hosts its annual Ultimate Horror Weekend, which is one of the most celebrated spooktaculars in the country. In addition to vendors hawking their horrorshow wares, guests can take advantage of panel discussions, celebrity guest appearances from TV and horror films (this year’s guests include stars of AMC’s The Walking Dead, Chris Sarandon from Fright Night and Clu Gulager from Nightmare on Elm Street 2) and the Freak Show Horror Film Festival, a showcase of original horror movies made by indie filmmakers from around the country. Attendees get a chance to catch some of the best of the genre’s up-and-coming filmmakers before anybody’s even heard of them. Various times, The DoubleTree Orlando at Universal Studios, 5780 Major Blvd., $30-$50, freakshowfilmfest.com

Oct. 20
Stop Making Sense
It’s the 30th anniversary of the Talking Heads concert film Stop Making Sense. We’re simply reeling that it’s been so long since the release of the Jonathan Demme-directed concert film, often called the best concert movie of all time. In August, a 30th-anniversary digital edition of the movie was released, which will be screening at the Enzian tonight. In August, Talking Heads drummer Chris Frantz explained to Rolling Stone that, at the time, band wanted to make a film that was pretty much the opposite of everything people were seeing on the then-3-year-old MTV: "We didn't want the clichés. We didn't want close-ups of people's fingers while they're doing a guitar solo. We wanted the camera to linger, so you could get to know the musicians a little bit." The band members paid for the movie themselves, so they were able to call the shots themselves – from choreography (or lack of) to costuming (including David Byrne’s legendary giant suit), the movie reflects everything the band was. While we can hardly get our heads around the fact that it’s been three decades since Stop Making Sense was released, we’re wildly excited that we’re being given a chance to view it on the big screen twice in a lifetime (get it?). Enzian Theater, 1300 Orlando Ave., Maitland, 407-629-0054, $10, enzian.org

To search for more film events happening this fall, visit our calendar.