Fast-food workers protest on I-Drive for a living wage

Organizers and strikers call for $15 an hour, nearly double the current minimum 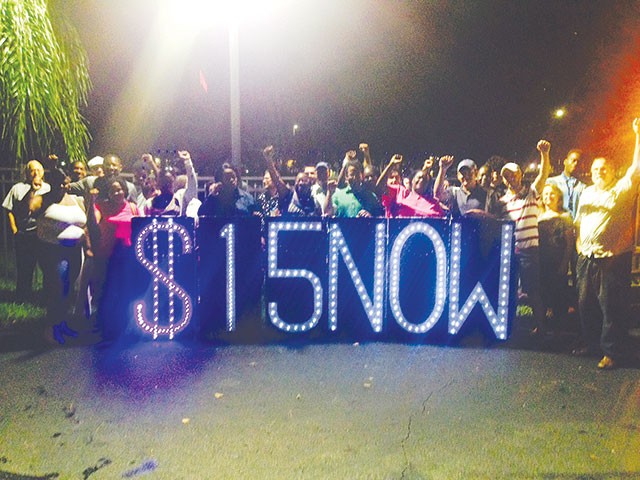 “All across the country right now there’s a national movement going on made up of fast-food workers organizing to lift wages so they can provide for their families with pride and dignity. There is no denying a simple truth. America deserves a raise. Give America a raise.”

Hourly wage requested by fast-food workers in more than 100 cities across the country during the Sept. 4 “Fight for 15” protest and strike. The current minimum wage in Florida is $7.93

Across the country, from burger sweatshop to chicken sweatshop, fast-food workers and those who care about them in more than 150 cities decided to make some noise (again) about how they weren’t just 16-year-old glue sniffers trying to appease their divorcing parents with gainless employment – rather, in the new economic paradigm, they are the mothers and fathers and educated workers who have been pushed down the fiscal ladder by increasing income disparity. Also, finger-waggers, standing on your feet for eight hours and rushing cheap meat to unappreciative people in a hurry is probably about as taxing as your hourly desk-bound Facebook binges, right? Don’t judge.

Upon our arrival, it didn’t seem like things were quite in alignment with the Orlando iteration of the protest. Giant television floodlights were hoisted on poles across the street from the BK right next to the palpable impatience of early-morning television news correspondents. But on the protest side – right next to the regency of grill-lined meat – stood about seven people, only one carrying a sign about “living wage” being “non-negotiable.” Where was the anger? Where was the food fight? Where were the people?

Some guy in a New York Yankees jersey – who we will just refer to as “some guy,” because he was more “some guy” than any “some guy” we’ve ever come across – came around to let the fearless seven know that they could get that $15 an hour they were fighting for if they turned into Nirvana and moved to Seattle or something (Seattle recently raised its minimum wage to $15). Then he went into Burger King, ordered a coffee, and proceeded to flummox the newscasters with his opinion that “Disney owns everything around here; there’s no way, y’know?”

Anyway, before we could wave our fists and scream “What of you, proles!,” a huge parade of nearly 100 protesters came walking around the corner to the beats of drums and the rhythm of glorious chants like, “Hold the burgers, hold the fries! Make our wages supersized!” For added effect, they carried a huge “$15 NOW” light-up sign and a pretty impressive chip on their collective shoulder. A handful of them were purportedly “striking” from one of several of the fast-food jobs they work to keep food on the table, so they were summarily escorted to the newscasters. Everyone kept chanting and almost getting hit by passing buses on I-Drive.

But it wasn’t just about the carnival-like scenery of a before-dawn economic outcry, obviously. There isn’t really that much funny in poverty. According to recent figures released by the Alliance for a Just Society (yes, you can read political leanings into that, if you’d like), a single person living in Florida needs about $17 an hour to make a living wage, factoring in “what is needed to meet basic needs and maintain some ability to deal with emergencies and plan ahead.” In Florida, the minimum wage – which is what most of your invisible, taken-for-granted “burger-flippers” have been making – is a scant $7.93, though that is better than the federal bottom of $7.25 over the past five years. People are starting to get fidgety about this now, you should know. In fact, in several major cities, people were arrested at the Sept. 4 protests, they got so rowdy.

Nonetheless, even mentioning the idea of a doubling of minimum wage turns every armchair Fox quarterback into a seasoned economist, as you may have been able to tell from your Facebook feeds on Sept. 4. People will lose their jobs! They’ll just be replaced by robots! You should get an education and get a real job! Hold me, I’m scared of the “other” people!

But, as they are wont to do, WFTV-9 News took the whole thing a step further than the comment section under a leading story (cough), reporting that they had “learned” that the organizers of the local protest, Organize Now, were only paying their canvassers $12 an hour. Hypocrisy! Except, uh, McDonald’s had revenues over $28 billion in 2013 and pays its workers an average $7.62 per hour. Organize Now is a nonprofit that begs for its scraps. That’s some learning curve, WFTV. How many french fries are we holding up? Go ahead. Guess.