'Ferdinand' tries to teach a lesson, but it lands with a loud plop 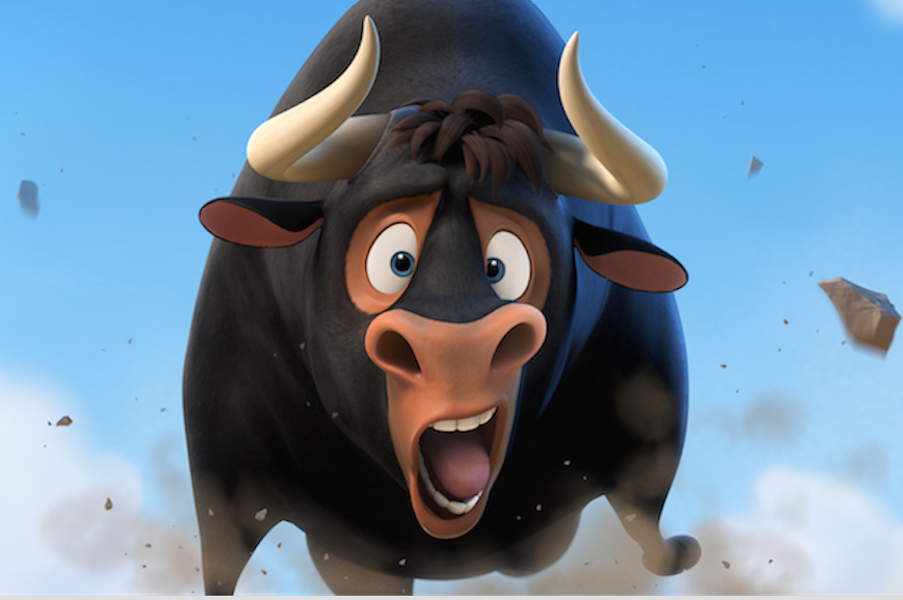 We'll say this for Ferdinand, the animated feature opening against Star Wars: The Last Jedi for some reason: It's the only film opening this weekend at which you'll get to hear the iconic 20th Century Fox fanfare preceding the feature. If you're smart, though, you'll time it so that you exit the theater directly after said fanfare and make your way over to a neighboring auditorium just in time to see "A long time ago, in a galaxy far, far away" pop up on the screen.

Ferdinand is an adaptation of the 1936 children's book The Story of Ferdinand, by Munro Leaf. Disney previously adapted the tale about a Spanish bull who prefers to smell flowers rather than butt heads with his fellow bulls in a 1938 short, but Fox picked up the rights in 2011, handing over production duties to Blue Sky Studios – known mostly for release-schedule filler like the Ice Age series and Rio. But the original story – which can be summed up in about four sentences – is too slight for a feature, leaving Blue Sky to pad out this version of Ferdinand with celebrity voice casting, dumb humor and plot contrivances that will stretch the limits of even children's suspension of disbelief.

In this adaptation, Ferdinand is a young bull living at Casa de Toros, a ranch and training facility for bulls raised to fight in the bullfighting ring. After his father doesn't come back from a bullfight, Ferdinand escapes the ranch, finding a peaceful existence with a young girl named – unimaginatively – Nina.

After growing to a humongous size over the course of a montage, Ferdinand gets roped back into Casa de Toros after "accidentally" destroying a town during a flower festival. Ferdinand's pacifist tendencies don't go over well with his fellow bulls, but a quandary presents itself when it's revealed that bulls who can't hack it in the ring get sent to the "Chop House," a slaughterhouse conveniently located right next door to the training ground.

The film tries to deliver a message about pacifism and being yourself to young kids, but the message it really delivers is that violence is OK as long as you have an excuse. In Ferdinand's case, that excuse is – without fail – something sharp poking you in the ass. The gag is so overused that it's bound to deliver the message that overreaction is fine and always excused – just what kids need to hear.

John Cena does a fine job voicing the titular bull, even if the material he's given doesn't really give him a chance to show much emotional range. And SNL MVP Kate McKinnon – as a calming goat turned aspiring bull trainer – manages to snag most of the laughs. But the rest of the cast – particularly David Tennant and Bobby Cannavale – are underused.

You may get some chuckles out of some of the filler gags, like a So You Think You Can Dance-style dance-off between the bulls and three aristocratic Lipizzaner horses, but none of them tend to serve the plot or characters. The bar for all-ages features has risen so much thanks to the work of Pixar, Laika, Disney and others, that it's hard to excuse this kind of pandering from animated movie anymore. And judging by the schedule placement – opening on the same weekend as the biggest movie of the year – Fox isn't expecting much out of Ferdinand either.