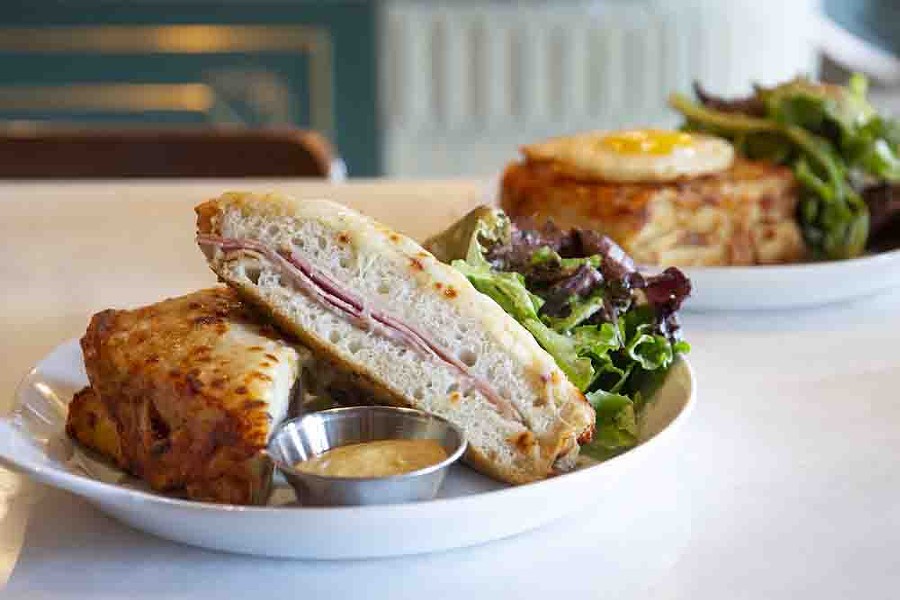 Financier Pâtisserie once counted such primo Manhattan locales as Grand Central Station, World Trade Center, 42nd Street and Park Avenue in its portfolio before COVID came and took it all away. "To our loyal and longtime clientele, it is with great sadness that we have come to the conclusion to permanently shut down Financier Pâtisserie NYC," wrote co-founders Peter Poulakakos and Eric Bedoucha on Facebook.

Total suckage. Bedoucha left, but Poulakakos and his business partner Paul Lamas opted to keep their new Winter Park location open. Théo Goupil, Financier's executive pastry chef who oversaw the Florida expansion, became executive chef and operating partner of the Florida restaurant with the most New York address ever (212 N. Park Ave.) and, together with his wife and general manager, Danielle, performed a pivot that was downright Kobe-like.

The chichi patisserie was re-concepted into a chichi bistro and pastries were sacrificed — the namesake financier included — in favor of polished plates of French bistro fare. That said, Goupil still fashions a variety of croissants and brioche breads every morning, though not the brioche buns used for the $18 bistro burger. It's pricey, yes, but not without allure — it's hard to resist the caramelized onions, barbecue-like house sauce and melted Gruyère running down the sides and oozing onto shoestring frites. It's a pretty burger, worthy of Financier's pretty space, save for the gaudy "But First, Coffee" neon sign plugged in above the bar. I mean, pourquoi?

Having worked as a pastry chef for many years, Goupil places great importance on plating and food styling — hell, the ratatouille ($14), looking like a supernova fashioned from slivers of zucchini and squash, could be taped to a wall and sold for $100,000. Beats a banana, if you ask me. 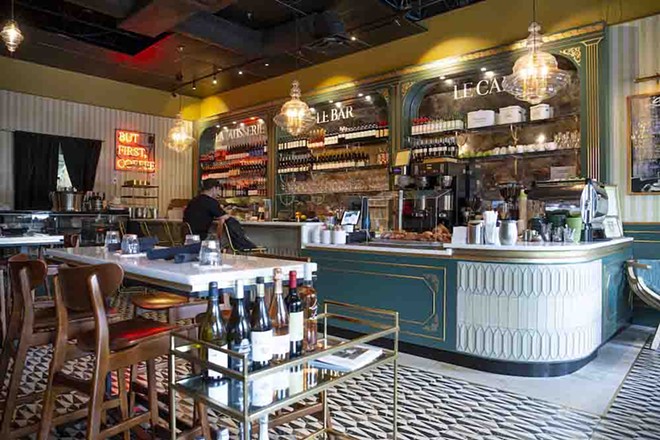 And if you want to put on airs at Financier Bistro, go right ahead. If the pandemic taught us anything, it's that restaurants are more than just repositories of sustenance — they're places to have a bit of fun. A gorgeous place like this lends a platform for us to sing C'est si bon while enjoying a plate of burrata ($16) with heirloom cherry tomatoes slicked in arugula pistou. Bite into a bread baton, then sip a Provençal rosé while swaying to the tune in your head. Note: Voices do carry inside the inviting space, but there are sidewalk tables at which to enjoy additional bistro classics like the croque monsieur ($16). The thick slabs of sourdough (sourced from Douce France Bakery) on this ham-and-cheese sandwich come with béchamel and Gruyère baked on top. It's served with greens tossed in a Dijon vinaigrette.

Now I realize food, supply and labor costs have gone up, and restaurants are staggering in this post-pandemic world but, I'll admit, it was a bit hard to stomach paying $22 for a quarter-chicken poulet rôti — perfectly roasted and crispy-skinned as it was — along with fries and a small salad.

The flaky chocolate-hazelnut croissant ($4.25), on the other hand, was gut-loving goodness. While the Madagascar vanilla crème brûlée ($7) sits on the opposite end of the texture spectrum, it, too, was flawless. So what of the financier? Give Goupil a 48-hour heads up and he'll gladly make you an almond or chocolate version of the bar-shaped cake. My personal belief is that as the restaurant comes out of the pandemic under more stable footing, the financier will, once again, be a permanent fixture on the menu. You can bank on that.