There's an entire film genre – "stoner comedy" – inextricably tied to the art of lighting up, leaning back and watching a movie. But there's only so many times we can watch the same old gags and routines in Half Baked or any old Cheech and Chong flick. When the mood strikes you to put on a late night flick to get high to – or just feel like you are – try one of these movies for a more cerebral experience.

The Thief and the Cobbler

The story of this film's production is a little more interesting than the actual movie. Animator Richard Williams worked on the film off and on for more than 30 years as it bounced around between studios, suffering from re-edits and studio-mandated voice-overs. But the real star of the movie is the animation, which is hypnotically geometric, sometimes reminiscent of an M.C. Escher print in motion. See if you can pick out the parts that Disney "was inspired by" in its retelling of Aladdin.

Alejandro Jodorowsky's psychedelic masterpiece lends itself to altered states. Although it's laden with stunning visuals and over-the-top symbolism, The Holy Mountain may be the most comedic film on this list due to its skewering of man's search for meaning.

This film from French director Gaspar Noé follows the soul of a young American drug dealer after he dies in Tokyo. It's mostly shot in first person as his spirit floats through the neon-streaked city or revisits moments from his past. The kaleidoscopic colors and inspiration from the Tibetan Book of the Dead make it a perfect choice for your next Weed Cinema night.

Beyond the Black Rainbow

There may not be a lot of coherent plot in Beyond the Black Rainbow, but it's easily one of the most visually striking science fiction films of the past decade. Utilizing old-school film techniques to re-create the look of '70s and '80s sci-fi, the film pays homage to the classics while telling a disturbing story about a young woman who's the victim of experiments that give her psychic powers. 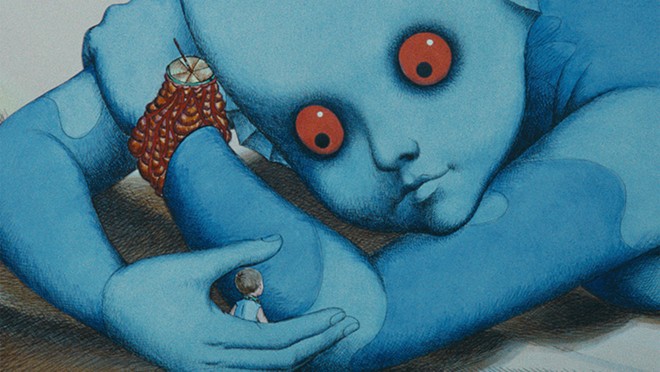 This French animated film is something of a metaphor for how humans can be viewed as alien conquerors by other species. And that's great and all, but what you really want to watch this movie for when you're toasted is the freaky alien landscapes and giant blue Draags.