Eating good in the neighborhood

An independent convenience store has stood on the residential corner of East Amelia Street and Cathcart Avenue in Eola Heights for the better part of 80 years, and thanks to Sean Kelley (Henry's Depot), Shaun Noonan (Dixie Dharma) and Joe Roberti (Grain & Ember), one will continue to stand for the foreseeable future. When neighborhood fixture Handy Pantry announced their closing last year, the trio purchased, revamped and reconcepted the corner store as Eola General, touting it as a "one-stop picnic shop." There are plenty of interesting wines from Curate's Matt Uva, and varieties of cheese from La Femme du Fromage. There are even cute wicker picnic baskets for sale. But where were the snorkels? The crossbows? The pantyhose? Clearly general stores are not as general as they once were.

Granted, without the benefit of a fryer, range or hood, the kitchen is limited to making sammies and boards. So, on a particularly muggy day, we got a plate ($9) of house-pickled veggies (asparagus, okra, cukes, green beans, curried cauliflower) and peaches and pleasurably picked away out front on the dog-friendly patio. We got a board of housemade beef jerky ($9), too, the thin cuts of top round marinated in pineapple, brown sugar and chili flakes. It's served with a side of pickled chow (radicchio, cabbage and onion) and boiled peanuts that we couldn't get enough of. The thicker cuts from the same slab of top round are rubbed with herbes de Provence, then roasted in a toaster oven before being sliced for the French dip ($12.99), and a great French dip it is with caramelized onions, horseradish crema and a melty blend of cheese in a baguette procured from the Tribeca Oven in Jersey. The leftover beefy bits and collected veg trimmings form the foundation of a very credible jus. 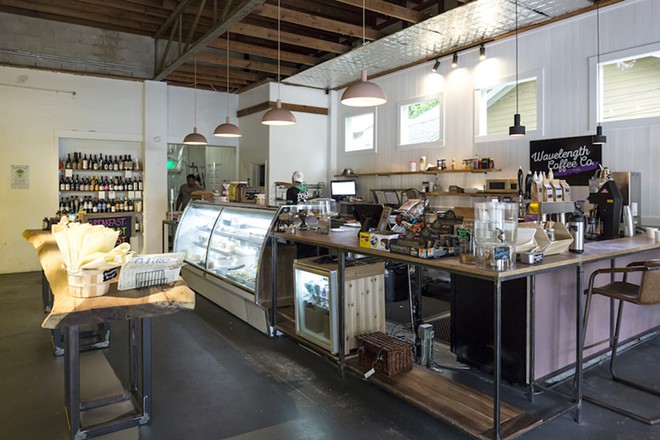 All sandwiches are served with a side and with kettle chips that Eola General purchases then seasons with paprika, salt and a bit of orange zest. Of those sides, the potato salad was overly smoky, and neither the pasta salad nor the root vegetables enhanced the other two sandwiches we ordered – one of which was an utterly gratifying (and vegan) Buffalo cauliflower ($12) with braised greens, seasoned tomatoes and a citrus-cilantro-cashew sauce served on marble rye. The other, dubbed "The Messy General" ($12.99), had braised barbecue chicken between a cornbread and cayenne waffle and, yes, the sandwich lives up to its name.

There are bagels and breakfast sliders and plenty of Wavelength Coffee for early risers, including a nitro cold brew ($4) on tap. There are pastries from Buttermilk Bakery (including those addictive blueberry cheesecake pop tarts), stroopwafels from Gezellig Cookies, juices from Juice Bar and a host of products from local outfits – the Nutty Peanut, Sweets Babs Sauces, Living VitaliTea Kombucha, Lake Meadow Naturals and more.

In a market where large chains dominate the convenience store landscape, it's nice to see an independent, locally run option. (I'd be as happy as a snorkelin', pantyhose-wearing archer if there was an Eola General in my neighborhood.) So if you're downtown and need to stop at Wawa or 7-Eleven for a gallon of milk or a quick bite, allow me to point you in this General direction.