FKA twigs is a creative (and conversational) force of nature

U.K. star speaks at length about her craft, her personal growth, her romantic life and how she fits into today’s female pop world 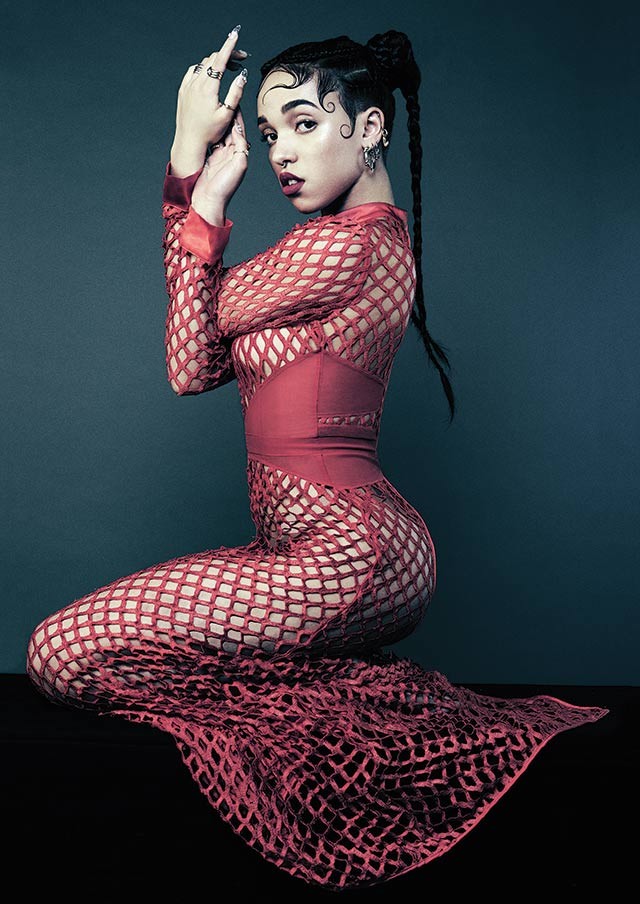 Some artists make us dance. Some make us weep. Some make us cringe, and some make us think. Very few artists do all of the above, all at once, though. But 26-year-old Gloucestershire, U.K., native Tahliah Barnett, the only child of a part-Spanish mother and Jamaican father and a longtime backup dancer who now writes, records and performs as FKA Twigs, sure fits the bill.

Twigs’ minimalist R&B, spaced across 2012’s EP1, 2013’s EP2 and 2014’s LP1, veers between the isolated and the immediate. Her off-kilter beats (many self-produced) splinter and crackle, rarely thumping or hitting hard. Her falsetto is seductively ethereal, her lyrics strikingly direct. Her visual performance style, on stage and in videos, is punctuated by lithe, self-contained dance moves and ornate, mystical costumes. Several media outlets have dubbed her the most exciting musician in the world, and she’s sold out nearly all of her fall/winter U.S. tour dates.

Sadly, she’s also the current object of tabloid obsession thanks to her romance with Robert Pattinson, whose legions of online superfans have stooped to shockingly racist lows in deriding the Twilight star’s latest squeeze. Orlando Weekly listened as FKA Twigs spoke eloquently on that subject and many, many more in a far-ranging phone interview.

OW: Has your live show changed much in 2014 since your popularity has skyrocketed?
FKA Twigs: Not really. It’s still just me and my band. It’s difficult because it’s less intimate when the shows are bigger. I really want to touch every single person, but you can’t see the person in the back now. That can be a challenge. Before my last run of U.S. shows, I felt like more of a secret.

Your performance style was recently highlighted in a Pitchfork essay about the “New Feminist (Dance) Movement.” Do you feel that’s accurate?
I just feel, and then I do – it’s as simple as that. In terms of any piece written about me, I’m not that interested. It’s thinking after the fact. People ask me questions, like, “How do you feel that your mom being a Latin dance teacher affected your rhythms and your music?” I could sit here and tell you about how my Latin blood burns to the sound of a drum. But it’s just not true. I like dancing, but I move in my way, Lorde moves in her way, Ciara moves in her way… they’re all equally relevant. I don’t really believe in singling it down to some feminist movement. All I do is make things that I feel honest about.

Have you mastered the art of writing music and producing it? Or do you keep them separate?
That’s a good question. The main thing is balance. I get so into sonics and sound, but I want to grow as a songwriter, especially now that I’m confident as a producer.

You maintain near-total control over all aspects of your artistry. Are you open to collaborating with others?
I just want to work with nice people – people who make me laugh. That’s my main criteria. It sounds cheesy, but life’s too short otherwise. The small things become the most important things.

Your music videos are intensely creative. Do you divorce the visual concept from the song it represents?
No, it’s actually the opposite: I throw every emotion from the song into that visual. It’s all completely linked. It’s to help people understand my emotion and see where I’m coming from as an artist.

Has the perspective of your songs changed since you first wrote them?
Yes, they do change, just as I’ve changed as a person. A line can be ambiguous, like on “Pendulum,” it says, “I’m not enough for your constant found.” When I wrote that, I felt like I wasn’t enough for that person’s constant state of equilibrium. I was not worthy to be in their presence; I felt very subject to their condescending nature. Whereas now I realize they were just being mean. So now, when I sing the lyric, it almost feels ironic or sarcastic.

“Pendulum” also addresses the challenges of establishing identity. Has your art allowed you to work that out on your own terms?
Not in the past, when I’ve really grown through lovers, which is quite a dangerous thing to do. It makes you very vulnerable. But the last two years, up until now, I’ve been very single, [which] really forced me into facing my own demons.

Have the attention and attacks you’ve received for dating Robert Pattinson jarred you?
You know how when you’re child you’re surprisingly resilient to things? I feel a bit like that. As an English person, there’s a lot of dark humor in being suddenly thrust into a side of the world that I really know nothing about. It’s bizarre, isn’t it? It’ll be me this week and someone else next week, though, and ultimately what I create is forever. So that’s the focus.